John Puttick Associates' competition-winning scheme for the Youth Zone neighboring the Preston Bus Station has undergone a major design change, opting for a standalone structure instead of one that directly connects to the station building. “The [Youth Zone] combines the lightness of a pavilion-like design with the gravitas required of any building with a significant community role constructed adjacent to the powerful forms of the Bus Station,” say the architects.

The station building, designed by BDP and completed in 1969, is now a Grade II listed structure. The new design of the Youth Zone seeks to preserve original BDP strategy, creating a spatial unity with satellite structures, what the architects call “a sequence of sculptural objects adjacent to the main [station] building.” The 2,600 square meter (28,000 square foot) Youth Zone will provide sports, arts, and performance spaces to young people in Preston. 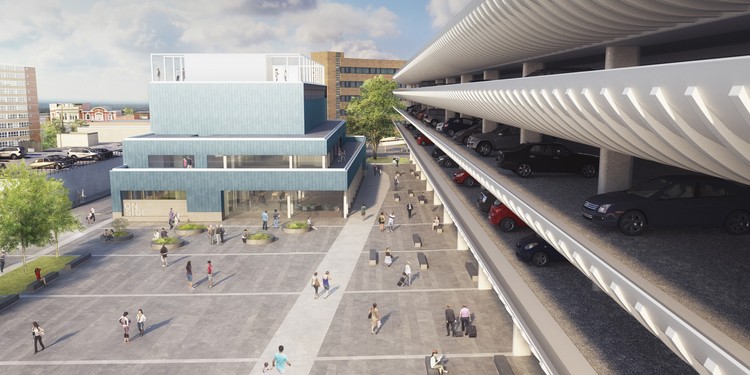 Preston Bus Station: What Does the Winning Proposal Say About Open-Call Competitions?

In 2013, following a number of campaigns, a 1969 Brutalist icon in the northern British city of Preston was listed. The future of this bus terminal—one of the largest in the UK and the biggest in Europe when it originally opened—was, until last month, a matter of considerable speculation and debate. This week the results of an international open-call competition for proposals transforming into a new youth centre were revealed, selecting the proposal of New York based practice John Puttick Associates as 'the best of the lot.' The 'lot', however, left something to be desired.

Following the announcement in 2013 that Preston Bus Station, a Brutalist icon designed by BDP in 1969, had been Grade II Listed and therefore saved from the threat of demolition, the results of a recent international ideas competition to consider its future as a youth centre have been revealed. John Puttick Associates, based in New York, have beaten competition from Flanagan Lawrence, Letts Wheeler Architects, Sane Architecture, and local practice Cassidy + Ashton with their proposal to meet "the challenge of sensitively introducing contemporary design to the existing setting." Over 4200 people voted for their favourite design at an exhibition held in the bus station itself and through and online mechanism, and "were taken into account by the judges when making their final decision."

The Royal Institute of British Architects, together with the Lancashire City Council, has unveiled five proposals seeking to transform the once at-risk Preston Bus Station into a new public space and youth center. Each design was selected from 100 entries submitted via an international design competition focused on preserving the historic structure's Brutalist nature.

The anticipated £13 million plan is a major step forwarded considering the 1960s station, now a Grade II listed building, was recently slated for demolition. The adaptive reuse efforts are a result of a successful, international preservation campaign that secured a second life for the iconic structure.

Now, Lancashire wants your help. View all 5 unanimous proposals (below), and vote for your favorite!

The Royal Institute of British Architects (RIBA) has launched an international design competition in search of ideas to transform Lancashire’s iconic Preston Bus Station into a new public hub and youth center. The anticipated £13 million plan hopes to not only provide a home for the new Preston Youth Zone Plus, but preserve the historic structure's brutalist appearance.

Preston Bus Station, designed by BDP and completed in 1969, was previously slated for demolition. However, last year the success of an international preservation campaign saved it from destruction and helped the building achieve Grade-II listing.

The proposed program and competition details, after the break.

A proposal to ensure the future of Preston Bus Station could see part of the structure converted into a youth centre, as part of a £23 million renovation. The proposal by the building's owners, Lancashire County Council, involves halving the number of bus bays used by the structure to 40, freeing up the western end of the building for other uses, including a sports hall, climbing wall, art centre and outdoor sports pitches.

In addition to the youth centre, the £23 million budget covers renovation to the existing structure and improvements to the surrounding highway. Funding for the proposal will come partly from the council and partly from Preston Youth Zone.

More on the proposal after the break

Following news last week that four post-war buildings had been listed in the UK, the campaign to Save Preston Bus Station reached a victory today when it was announced that Ed Vaizey (Architecture and Heritage Minister) has listed the Brutalist icon, removing the threat of demolition. The campaign, which has garnered words of support from the likes of Richard Rogers and Rem Koolhaas, has been been underpinned by support from Angela Brady PRIBA, former President of the Royal Institute of British Architects.

As reported by BDOnline, Richard Rogers of Rogers Stirk Harbour & Partners has announced his support in the long-standing battle to save England’s Preston Bus Station from demolition. In a letter to the English Heritage, Rogers described the 1969 brutalist landmark as “truly a major modern building and an outstanding piece of 20th century architecture” that is in dire need of refurbishment.

“Preston Bus Station is not only admired internationally, but it also continues to be fully functioning. It is a critical transport hub,” he stated. “I would encourage you to consider listing the bus station and support a much-needed refurbishment.”

Parking is Hell (But Designers Can Help)

Most parking is free - but that doesn’t mean it doesn’t have a high cost. A recent podcast from Freakonomics Radio examined parking in US cities, investigating the “cost of parking not paid for by drivers” - a cost paid not just by the government, but by the environment - due to congestion and pollution caused by people searching for kerbside parking. For example, in a 15 block area of Los Angeles the distance traveled by drivers looking for parking is equivalent to one trip across the USA per day.

One potential solution which they discuss is a San Francisco project called SF Park, which makes use of sensor technology to measure the demand for parking in certain areas of the city and adjust price according to demand. In theory, this would create a small number of empty spaces on each block and dramatically reduce the time that many drivers spend cruising for parking spaces.

Though the idea is certainly an intelligent approach to the problem of kerbside parking, unsurprisingly all this talk of supply, demand and pricing sounds very much like an economist's answer to a problem. But what can designers do to help the situation?

Perhaps, from the designer’s point of view, the real problem with kerbside parking and surface lots is that they are always seen as a provision “coupled with” a building or area of the city. There have been a number of attempts by architects – some successful and some tragically flawed – to make parking spaces less of a rupture in a city's fabric and more of a destination in themselves. Could these point to another way?

Read about 3 examples of parking’s past, and one of its potential future, after the break...

Businessman Offers to Save Brutalist Landmark From Demolition

Divisive concrete behemoth Preston Bus Station may yet be saved from its planned demolition. On the heels of a well co-ordinated campaign to save the brutalist monument, local businessman Simon Rigby has stepped in and offered to relieve the council of the building planning refurbish and operate the bus station himself.

Read more about the controversy and Rigby's plan after the break...

The World Monuments Fund (WMF) is calling for international attention to the 1969 Preston Bus Station. Once the world’s largest bus station, the brutalist monument is scheduled for demolition as part of the city center’s redevelopment plan. The building is one of thirty UK “at risk” sites featured by WMF.