Following the announcement in 2013 that Preston Bus Station, a Brutalist icon designed by BDP in 1969, had been Grade II Listed and therefore saved from the threat of demolition, the results of a recent international ideas competition to consider its future as a youth centre have been revealed. John Puttick Associates, based in New York, have beaten competition from Flanagan Lawrence, Letts Wheeler Architects, Sane Architecture, and local practice Cassidy + Ashton with their proposal to meet "the challenge of sensitively introducing contemporary design to the existing setting." Over 4200 people voted for their favourite design at an exhibition held in the bus station itself and through and online mechanism, and "were taken into account by the judges when making their final decision."

For Hugh Broughton, RIBA Architect Adviser, "Preston Bus Station is a hugely significant twentieth century building and all the shortlisted architects have responded to its bold architecture with skill and empathy. John Puttick’s winning scheme cleverly resolves the requirements of the On Side Youth Zone to create a building which will be fun, safe and engaging to use while celebrating the original architecture of the bus station and providing flexible open space, which can become a focal point for community events at the heart of Preston life."

According to the AJ, around £23million will be pumped into revamping the building. 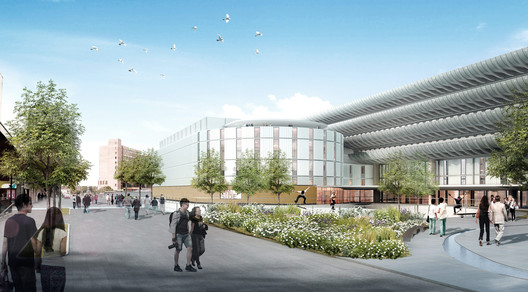