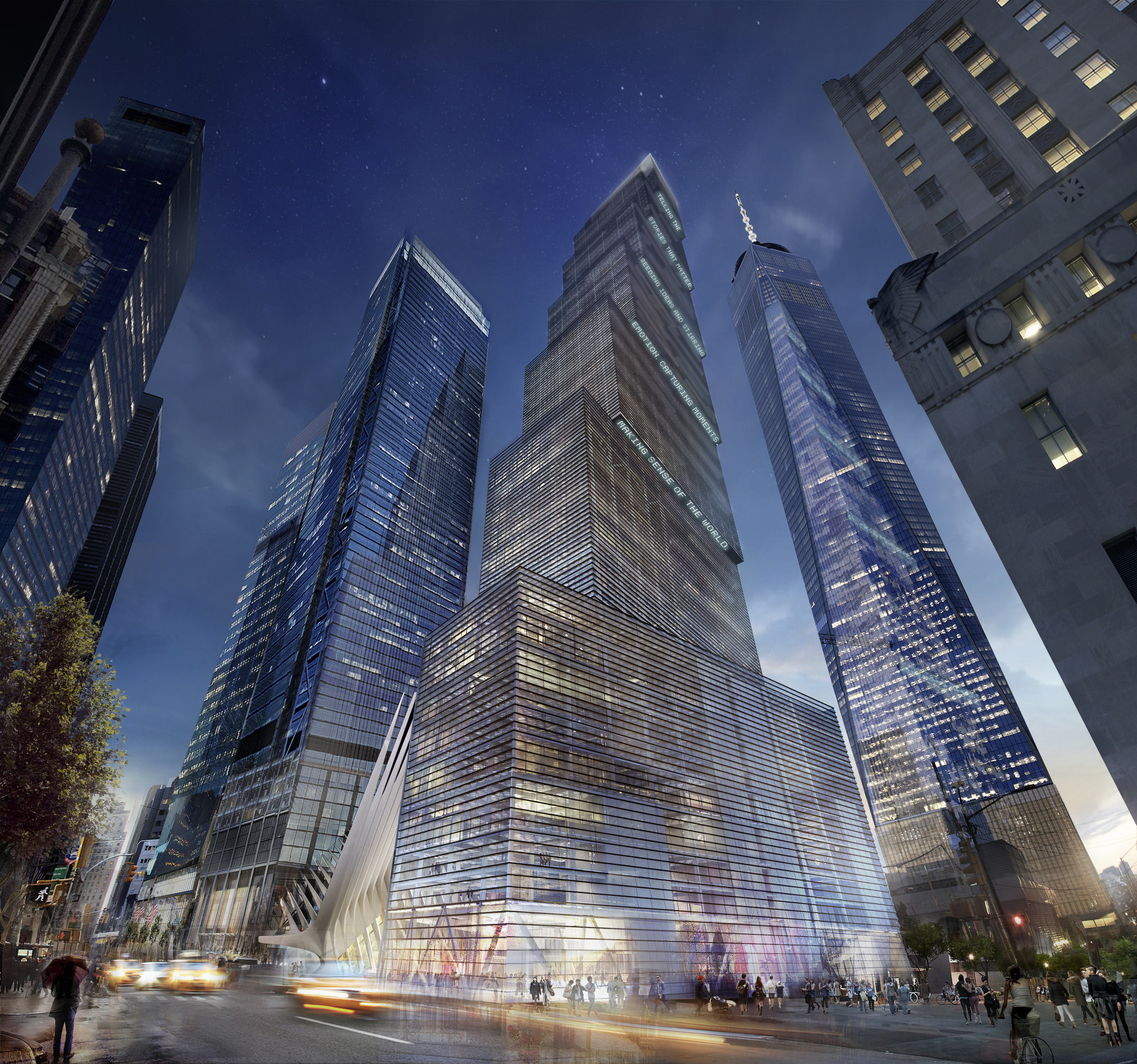 A new report from the Wall Street Journal suggests that BIG may replace Foster + Partners to realize the World Trade Center 2 (WTC2) tower - the final tower planned to be built on Ground Zero. The 79-story tower, originally designed in 2006, was stalled due to the economic crash of 2008.

According to the report, 21st Century Fox and News Corp have "tipped" BIG to redesign the tower should they strike an agreement with project backers Silverstein Properties and The Port Authority of New York and New Jersey to move into the tower. If the deal goes through, the two companies would occupy nearly half of the building - enough to kickstart development.

Video: Santiago Calatrava On His Design For Ground Zero's Only Non-Secular Building

In a film for the BBC Magazine, Spanish architect Santiago Calatrava talks through his designs for the new St. Nicholas Church - the only non-secular building on the 9/11 Memorial site. The building, which broke ground last year, has been described by Calatrava as a "tiny jewel" for lower Manhattan, comprising of a white Vermont marble shrine sat beneath a translucent central cupola that is illuminated from within. The new church, of Greek Orthodox denomination, replaces a church of the same name which was destroyed during the attacks of 9/11. It is sited close to its original location on 130 Liberty Street, overlooking the National September 11 Memorial park and museum. With the building set to open in early 2016, Calatrava discusses the key conceptual ideas and references behind its unique, controversial design.

"Its an adventure, because it's a highly political, highly emotional, highly complicated process, to get something built on the site which is about memory," explains Daniel Libeskind. "It's a day that changed the world… and architecture responds in constructing something that has sense for people, that has spirit."

In an interview with Shaunacy Ferro for FastCo Design, Daniel Libeskind looks back over his built works and discusses the significant 'emotional weight' imbued in many of his projects, from the Jewish Museum in Berlin to his masterplan for Ground Zero in New York City. When asked why he continually returns to projects such as Holocaust memorials - with the Canadian National Holocaust Memorial currently underway in Ottawa - Libeskind stated: "It’s not something that I choose very lightly, because it’s very difficult, but I believe that it’s very important." For him, creating these monuments is part of the act of doing "something that moves us beyond just the darkness and gives us something positive. [...] Even when it comes to the memory, you can’t just dwell on the irreversibility of the tragedy. You have to have something hopeful."

Frank Gehry’s design for the performing arts center at ground zero in New York has been shelved and the planning board will instead select a design from three other finalist architects, the New York Times has reported. This follows on reports from February that Frank Gehry’s original design was being revised and his plans for an initial 1,000 seat center were being abandoned. “We’re in the process of selecting a new architect,” said John E. Zuccotti, the real estate developer who is the chairman of the arts center’s board. “Three architectural firms are being considered.” Gehry, however, has said that he’s heard “zero at ground zero” and hasn’t been informed of the board’s decision. To learn more about the plans for the performing arts center see the full article from the New York Times.

The recent hire of temporary artistic director David Lan has indicated that plans for Ground Zero’s “world center for the performing arts” is moving forward in New York. The famed London director will work alongside Charcoalblue managing partner Andy Hayles to revise the original Frank Gehry-designed scheme which, according to the center’s president, was prematurely designed. This leaves Gehry’s involvement unclear, as the initial 1000-seat center will be abandoned for a scaled down, three-theater house that ranges from 150 to 550 seats. Competition for funding also remains an obstacle, in light of venues such as Diller Scofidio + Renfro’s 2017 Culture Shed. You can learn more about the center’s update here.

A portion of Santiago Calatrava’s $4 billion PATH station has opened. According to NY Daily News, the Western Concourse will now relieve New Yorkers from “cramped sidewalks and temporary bridges” crossing West St. with a 600-foot underground passage lined in “bright white marble” that connects the World Trade Center to the neighboring office complex formerly known as the World Financial Center. Once complete in 2015, the controversial transit hub will double as a massive shopping and retail complex, which aims to “transform” the cultural experience of lower Manhattan.