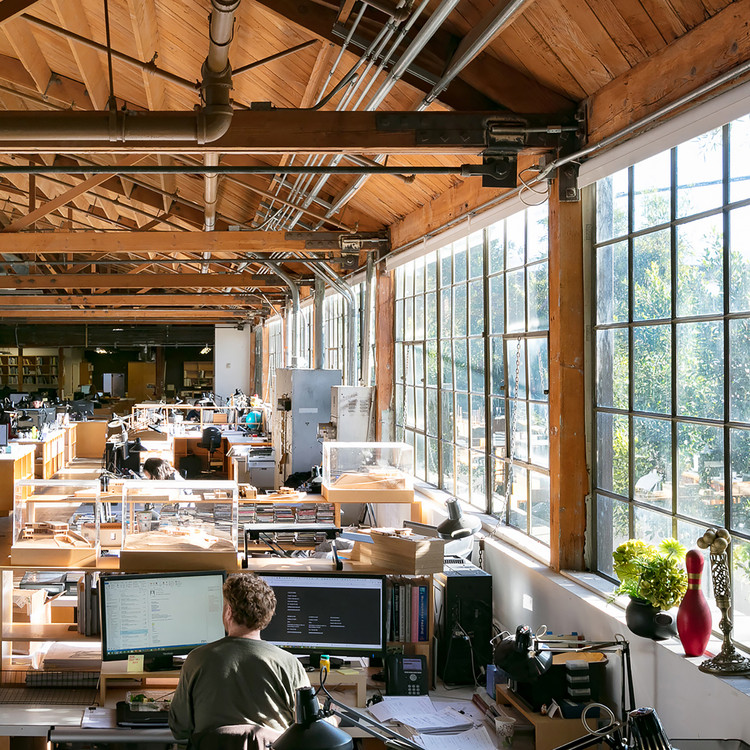 Now in it’s 17th year, the competition was founded to offer emerging architectural talent the opportunity to design a temporary, outdoor installation within the walls of the P.S.1 courtyard for MoMA’s annual summer “Warm-Up” series. Architects are challenged to develop creative designs that provide shade, seating and water, while working within guidelines that address environmental issues, including sustainability and recycling. 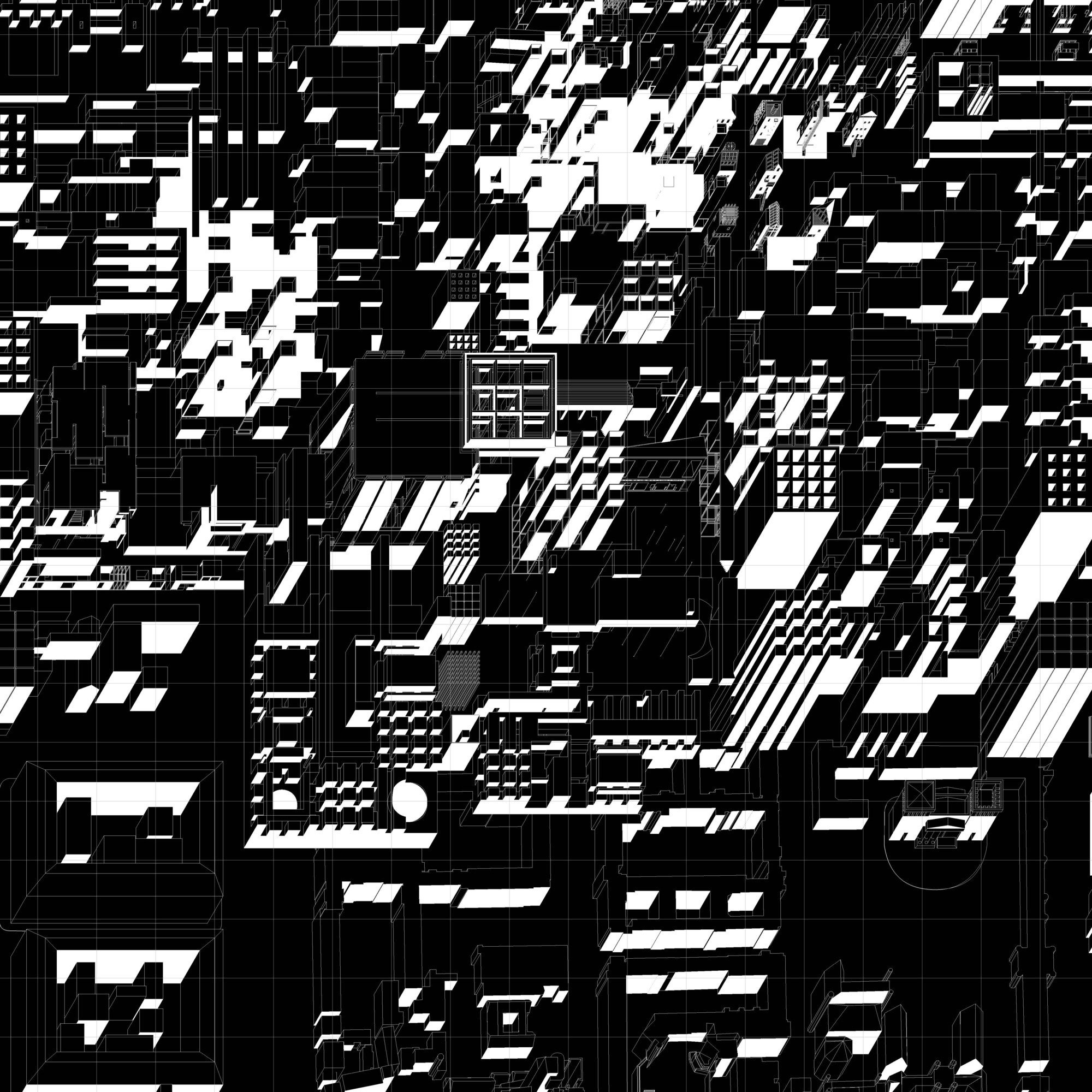 Designed for a laneway inside the Little Portugal neighborhood of Toronto, Flipping Properties tests the boundaries between architecture and furniture. The exhibition, created by Jiminez Lai and his team, Bureau Spectacular, unravels the traditional pentagonal shape of a house to create ‘super-furniture.’ Super-furniture is defined by Lai as “too big to be furniture and too small to be architecture.” The large installation pieces are meant to encourage dialogue on unused urban spaces in Toronto, while creating a novel way to interact with those spaces. Despite their size, the pieces can be rearranged within the laneway, allowing for a variety of assemblages to be created. Flipping Properties opened July 11th, and will be in place until September 14th in the laneway between Sheridan Avenue and Gordon Street in Toronto. Admission is free to the public. See the full gallery of exhibition photos, after the break. 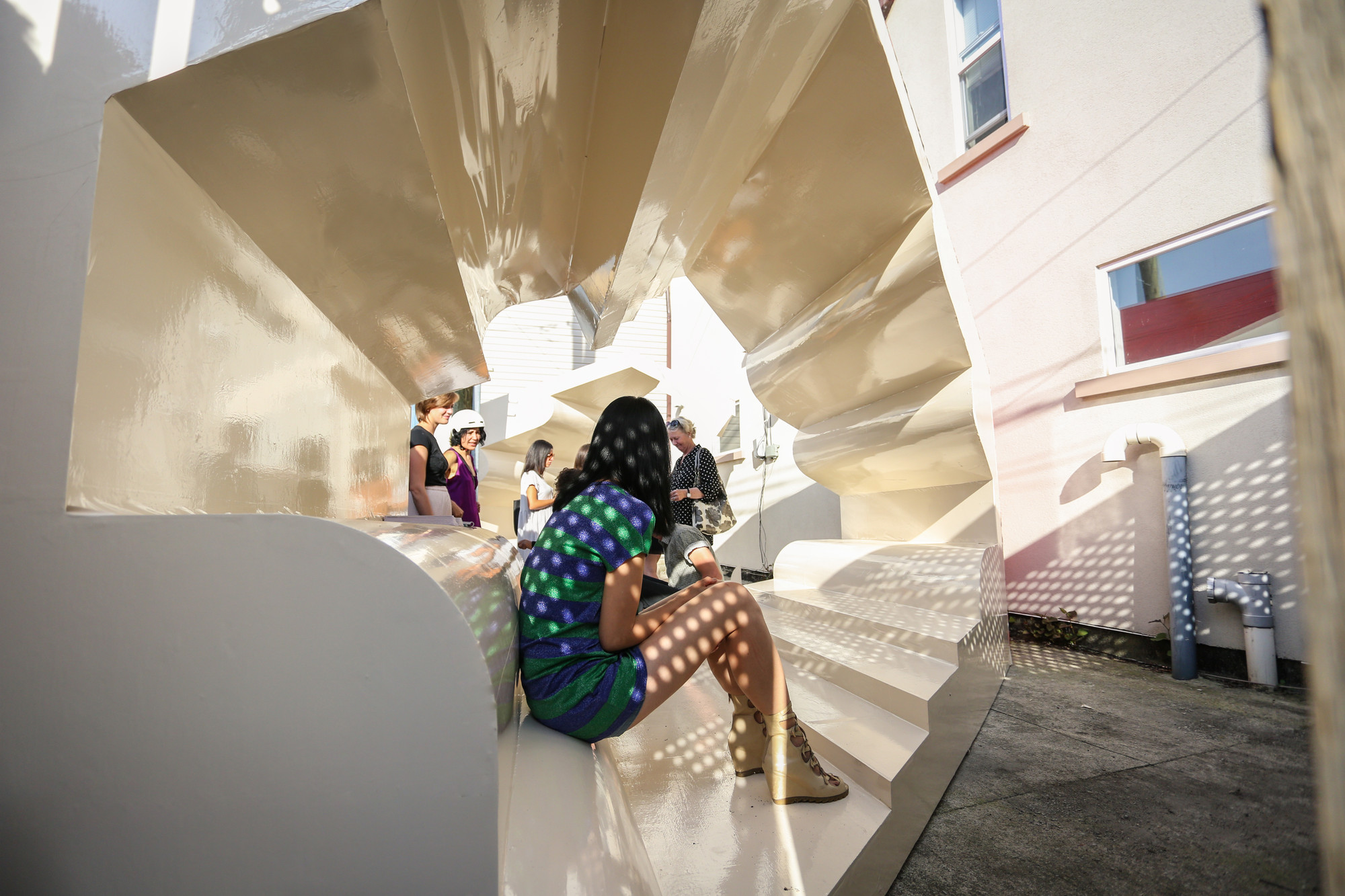 The "Urban Interior" of Jimenez Lai's Biennale Pavilion for Taiwan

Jimenez Lai, leader of Bureau Spectacular and curator of Taiwan's Pavilion for the 2014 Venice Biennale, claims that "domesticity is possibly one of the origins of architecture" and that "the standardization of the domestic program was...a very modern development." Thus, Lai built nine single-program houses within the Palazzo della Prigioni, each dedicated to one specific domestic act--such as sleeping, eating, etc. The result is a vibrant, colorful response to Rem Koolhaas' unifying theme: "Absorbing Modernity."

Township of Domestic Parts: Made in Taiwan, delves into the part-to-whole relationship and political implications of our domestic lives. But Lai also believes that, from this relationship, we can learn something about the way that cities function. See more images from the exhibition and read on for the curator's statement. 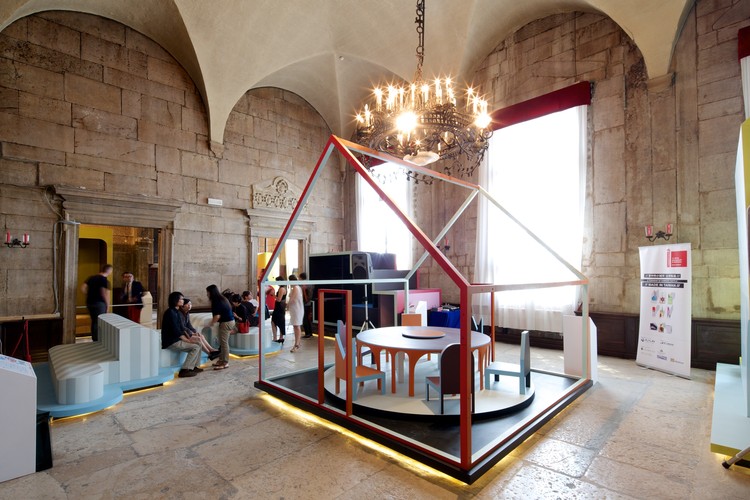 Taiwan-born architect Jimenez Lai’s proposal Township of Domestic Parts: Made in Taiwan has been selected to represent Taiwan in the 2014 Venice Architecture Biennale. Scattered throughout the Palazzo delle Prigioni, the installation will be comprised of nine small house, each with a single program, that will make up an “interior township of misfit parts.”

Read on for the complete curatorial statement...

Seven architects have been shortlisted from nearly 200 international applicants for Harvard University Graduate School of Design’s 2014 Wheelwright Prize. The $100,000 grant, which is awarded annually to a single architect to support travel-based architectural research, is “intended to spur innovative research during the early stage of an architect's professional career” and “foster new forms of research informed by cross-cultural engagement.”

Ranging from a Barcelona-based architect whose research proposal focuses on animal farming systems to a Croatian architect who wants to re-imagine the “border-scape” in Mediterranean countries, you can review all seven finalists after the break...

Jimenez Lai, founder of Chicago-based Bureau Spectacular has been selected as winner of the first Lisbon Triennale Millennium BCP Début Award. The award, presented by Millennium BCP president Fernando Nogueira, distinguishes a young architect or studio under 35 on outstanding work, development of original design thinking and the pursuit of critical ideas with a monetary prize of €5,000.

Three months ago, Commander Chris Hadfield captured the attention of millions by recording a cover of David Bowie's Space Oddity - entirely on board the International Space Station. The video was the culmination of five months of social media efforts to raise awareness and interest in current space programs worldwide, and it certainly seems that Hadfield succeeded in piquing the interest of at least a few future astronauts.

But for architects, something else probably stands out in the video: the ISS seems an extremely clinical and uncomfortable environment to live in for five months. The reasons for this are obvious: it is a highly controlled engineered environment; sending luxuries into orbit is expensive; the astronauts are there to work, and after all they are trained to cope in stressful and uncomfortable environments. However, with proposals for longer missions, such as a manned trip to Mars, as well as the continued promise of commercial spaceflight on the horizon, the design of living spaces outside of our own planet may soon become an issue which architects must get involved in.

Read on to find out about the challenges of architecture in space, after the break.

A Bureau Spectacular spectacular, one week from today!

One week from today, Chicago-based architecture practice Bureau Spectacular will transforms The Architecture Foundation’s Project Space into an inhabitable installation and a graphic sequence of imaginary worlds, through the studio’s trademark mixture of built structure and cartoon. Founded by emerging architect Jimenez Lai in 2008, Bureau Spectacular is a studio of architectural affairs, who describe their strategy as one of making “absurd stories about fake realities that invite enticing possibilities”. Fascinated by the interplay between storytelling and building, absurdity and speculation, Bureau Spectacular weave architectural design and theory into comic strips that pop from the page into the real world as installations and small buildings.

Jimenez Lai: “This installation – Three Little Worlds – is a cartoonish blow up of a fragment inside the Cartoonish Metropolis. It is a comic book someone can walk into, a window into another reality.”

Known as an architect, artist and cartoonist, Jimenez Lai has lectured on and exhibited his work nationally and internationally. He is known for his imaginative cartoon narratives and architectural installations. He is the founder of Bureau Spectacular and currently an assistant professor at University of Illinois at Chicago. His graphic novel, Citizens of No Place, will be published by the Princeton Architectural Press with a grant from the Graham Foundation this year.