Save
Look Inside a Collection of London-Based Architecture Offices, Photographed by Marc Goodwin
Share
Or
Copy

Architectural photographer Marc Goodwin has recently shot the second collection of his "ultra-marathon of photoshoots" – in London. Following his unique insight into the spaces occupied by Nordic architectural offices (based in Oslo, Stockholm, Copenhagen and Helsinki), Goodwin has turned his lens to a broad collection of practices in the British capital, captured in just seven days. From Zaha Hadid Architects' former school to Foster + Partner's monumental studios on the banks of the River Thames, here are a series of surprising places that architectural offices call home.

The feature image of this article was taken at Ben Adams Architects (55 employees) who have been in their space, which was formerly the Kirkaldy Testing Works (the ground floor is still a museum with the original machinery still in place), since 2010.

Look Inside a Selection of Danish, Finnish, Norwegian and Swedish Architecture Offices, Photographed by Marc Goodwin 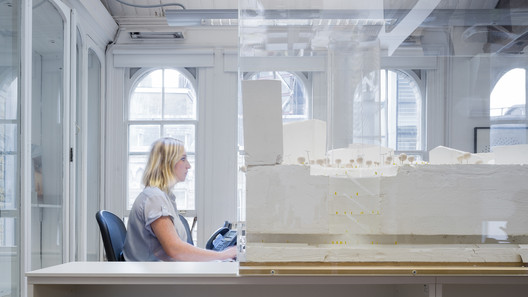