Chinese artist and activist Ai Weiwei unveiled the Arch, a cage-like sculpture in front of the National Museum of Stockholm. The 12-meter-tall stainless steel structure features at its center silhouettes of two people holding one another, appearing to break through the steel bars of the cage. The artwork was created to symbolize refugee stories and is seen as an ode to freedom. The sculpture is installed outside Nationalmuseum national gallery on the Blasienholmen peninsula in Stockholm’s archipelago. It will remain there for one year, after which, it will be moved to a yet undisclosed location in the city. 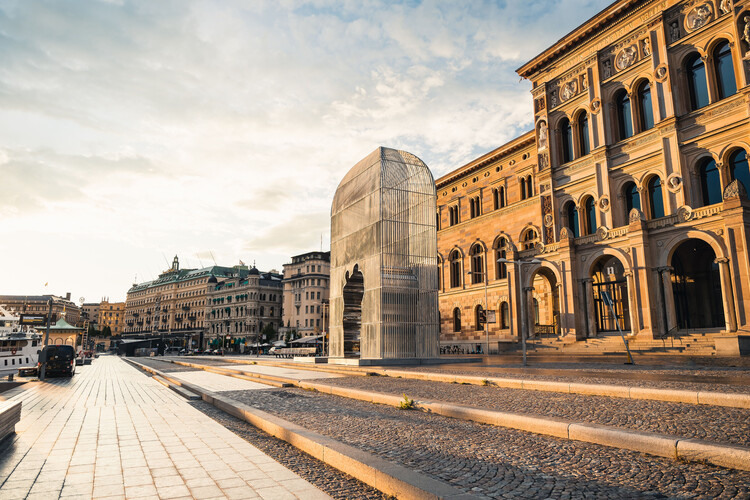 Initiated by EXMURO arts publics and the Ville de Québec, the 9th edition of Passages Insolites, or Unusual Passages, is open from June 25 to October 10, 2022, in the city of Québec. During this time, 17 works by 18 local, Canadian, and international artists will be placed along a 2.5 km circuit in the historic sectors of Place Royale, Petit Champlain, and the Old Port. This year’s edition creates spaces for artistic encounters and reflection on the environment, decolonization, and geopolitics. In the words of Vincent Roy, EXMURO’s executive and artistic director, this year’s programming will “help put Quebec City on the global art map as a venue for exhibiting art and promoting artists, both locally and internationally.” 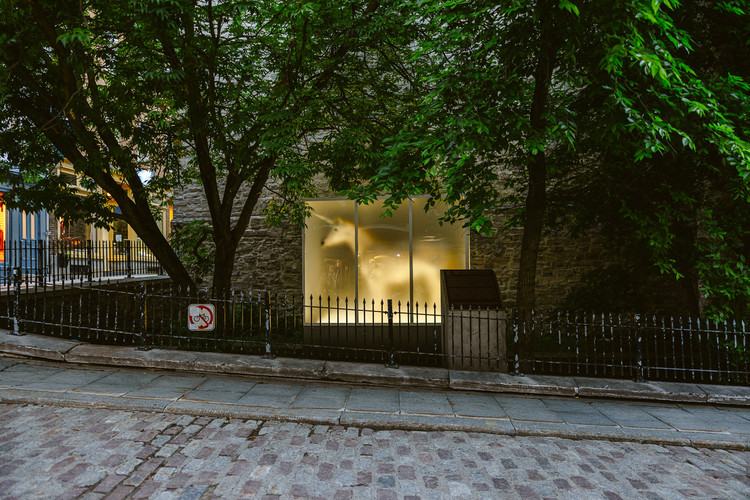 Life on the Moon, According to 8 Architects and Artists

This article was originally published by The Architect's Newspaper as "Ai Weiwei’s fences take on borders and belonging in NYC exhibit."

In Good Fences Make Good Neighbors, a new exhibition by Ai Weiwei presented by the Public Art Fund, the artist and activist takes on the security fence as a medium for urban intervention, with New York City as his canvas. Some of the works might be easy to miss, like the chain link fences suspended over a gap between two buildings on East 7th Street, just steps from Ai’s old basement apartment. But others, like the monumental Gilded Cage at Doris Freedman Plaza in Central Park, or Arch, nested under the Washington Square arch, are unmistakable and grandiose. 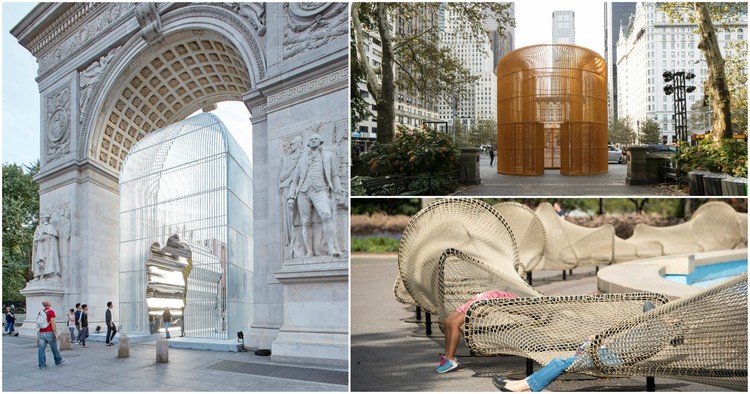 The latest collaboration between architects Jacques Herzog and Pierre de Meuron and artist Ai Weiwei may be called Hansel & Gretel, but it brings to mind just as much another literary classic: George Orwell’s 1984.

The immersive, site-specific installation, located within the expansive Wade Thompson Drill Hall at New York’s Park Avenue Armory, places visitors in a darkness-cloaked environment, where your every move is tracked and monitored by motion sensors, image captures and a team of surveillance drones. The work is a not-so-subtle interpretation of the expanding role of surveillance in modern-day society and the changing dynamics between the public and private realms. 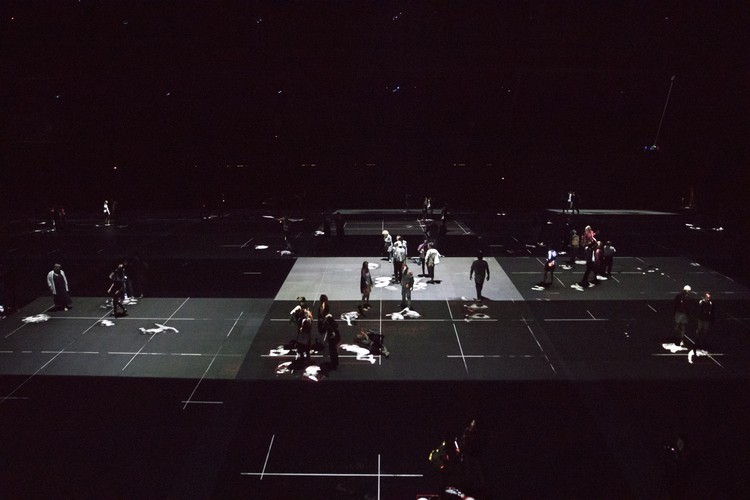 One Week Left of the Serpentine Pavilion!

The summer months have come and gone, which means one thing: the Serpentine Gallery Pavilion is winding to an end (on October 14th, to be exact)!

As we published yesterday, iconic Chinese artist, designer, and dissident, Ai Weiwei has just had his architecture design firm shutdown by the Chinese government. But this scuffle is only the latest of Weiwei’s many brushes with Chinese law. Seemingly since birth (“I was born radical“), Weiwei has been mixing art and politics to speak out against censorship in his country. Which is why he is the subject of a fascinating new feature-length documentary by Alison Klayman: ”Ai Weiwei: Never Sorry.”

As the documentary description explains: “Against a backdrop of strict censorship and an unresponsive legal system, Ai expresses himself and organizes people through art and social media. In response, Chinese authorities have shut down his blog, beat him up, bulldozed his newly built studio, and held him in secret detention.”

While working as a journalist in China, the director, Klayman, gained unprecedented access to Ai while filming. Since being released, the documentary has gained many accolades, including the Sundance 2012 Special Jury Award for Spirit of Defiance.

You can find out more about the documentary, including if it’s playing at a theater near you at its website. And you can keep updated on Weiwei’s struggle at the Never Sorry Facebook page and on Twitter, @AWWNeverSorry

Screenshots from the trailer of “Ai Weiwei: Never Sorry,” after the break…

After 81 days of detention without cause, a year-long travel ban extended for claims of internet “pornography,” and a $2.4 million dollar fine imposed for supposed tax evasion, Ai Weiwei has now been accused by the Chinese government of failing to re-register his architecture design firm, Fake Cultural Development Ltd.

As we announced back in February, Swiss architects Herzog & de Meuron and their Chinese collaborator Ai Weiwei will design this year’s Serpentine Gallery Pavilion at Hyde Park in London, a special edition that will be part of the London 2012 Festival, the culmination of the Cultural Olympiad. This will be the trio’s first collaborative built structure in the UK.

Back then, it was announced that their design will explore the hidden history of the previous installations (see all the previous pavilions in our infographic), with eleven columns under the lawn of the Serpentine, representing the past pavilions and a twelfth column supporting a floating platform roof 1.4 metres above ground, which looks like a reflecting water-like surface in the renderings. The plan of the pavilion is based on a mix of the 11 previous pavilions’ layouts, pavilions that are represented as excavated foundations from which a new cork cladded landscape appears, as an archeological operation.

Beijing urban expansion _ The fast and enormous urban development of Beijing has transformed the city into a metropolis made of suburban residential compounds, abandoned industrial plants, community housing blocks from the 70s-80s and popular self-grown villages. A mix of high rise residential areas, business districts, impressive infrastructures enclosing spontaneous house areas surviving the demolition and renovation dictated by the construction market. The population has grown from 1 to 18 millions in 60 years, and the size of the city has reached 5 times the ancient capital within the walls – the 2nd Ring Road.

The urban expansion, mostly based on imported urban models and low quality constructions, has been exploding in the past 30 years, and it is rooted with political and economical decisions, as well as local culture and history. Briefly, Beijing is a stunning showcase of urban consequences happening in the world’s first growing economy, during an explosive industrial revolution.

Ai Weiwei as TIME Person of the Year: Runner-Up

Chinese artist Ai Weiwei was selected as one of the runner-up candidates for TIMES 2011 Person of the Year Award. Ai Weiwei is known in the architecture world for his collaboration with Herzog & de Meuron, serving as the artistic consultant for the Beijing National Stadium, otherwise known as the Bird’s Nest stadium.

The work of Ai Weiwei was recently showcased at the Kunsthaus by Peter Zumthor in Bregenz, Austria. His collaborative work within the architectural arena was the main focus, filling all 3 floors with various projects. More after the break.

Ai Weiwei is free at last. Plus photos of his architecture work in Beijing

“You’re not going to find any of Ai Weiwei’s work being shown in Beijing”, said each Beijing gallery representative. That’s because the artist and agent provocateur has been detained for 80 days now was released today, from what the government is saying was based on “economic charges”. The name “Ai Weiwei” has joined a long list of sensitive words in this country, and associating yourself with the artist has become tantamount to asking for trouble. Just ask the Chinese curator who was questioned by authorities after putting Ai Weiwei’s name under a blank wall in Beijing’s Incident Art Festival.

While Beijing’s lively art scene might currently be scrubbed clean of Ai Weiwei’s work, there’s one thing that’s a little difficult to “harmonize” away, as it’s known here. In 1999, Ai Weiwei began moving into the world of architecture, establishing his own architecture studio called FAKE design four years later. So Ai Weiwei’s artistic vision continues to stand in the form of buildings across the nation’s capital. The most concentrated of these is the artist district of Caochangdi, a few kilometres north of the more commercial art district called 798. It’s also the location of the artist’s studio and where he headed straight to after his release.