Save
The Evolution of the Stadium: How the World Cup Has Influenced the Design of Sports Venues
Share
Or
Copy 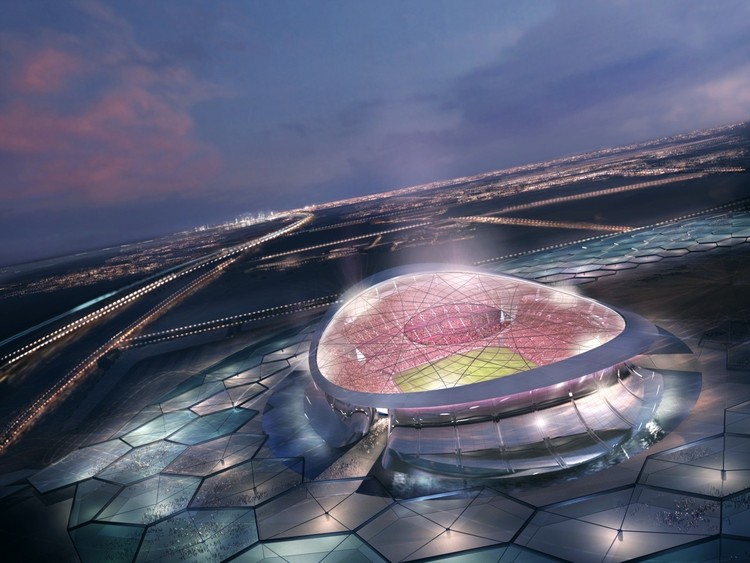 The first stadium to be specifically built for a World Cup, the Estadio Centenario captured many of the important moments of the World Cup in its infancy, hosting over 50% of the first tournament’s 18 games. The stadium, which was designed by architect Juan Antonio Scasso, was typical of the era and has helped set a precedent for future venues. Hundreds of circular steps were cast into a natural depression that surrounded the pitch, with slivers cut into the ground at its four corners to provide access. Its amphitheater-like, honest form did not get in the way of the game, marking a starting point of modern stadia’s progression.

This iconic stadium developed into an international showcase, with iconic moments and spaces that defined the success of a World Cup. In modern times, countries take advantage of events this size as a way to advertise their culture, and for a stadium, this means a design is not only for the people in attendance but also for those watching around the world.

The 1966 World Cup in England was memorable for several moments both on and off the field (including Pickles the dog, a black and white collie who famously found the trophy after it had been stolen a few months prior). The final was among the most memorable ever played, resulting in a 4-2 win for England over their old adversaries Germany. Televised across the world from Wembley Stadium, the two towers of the ground that was originally constructed in 1923 created an instantly recognizable silhouette that became synonymous with both the place and time. The towers became so iconic, that they were originally scheduled to be maintained in the Foster + Partner’s rebuild, only to be replaced by a more marketable arch. Focusing on design as well as capacity has become commonplace—think of the aperture-style retracting roof of the Mercedes-Benz Stadium, or the ice-shard form of the U.S. Bank Stadium—but Wembley lead the way in creating the idea of a stadium as more than just a venue, but a landmark for a city as well.

In 1994, the World Cup came to the United States, a land historically not what you would call "soccer crazy." A testament to the global appeal of the game, the home of Hollywood just had to host the tournament, and with their existing stadium infrastructure, it seemed like a walk in the park to do so.

What became apparent in 1994, however, was that the unique needs of different sports required attention in the design. The final was held in the Rose Bowl, California; an arena steeped in years of (American) football heritage, whose lateral distance from the field was ideal for in-game entertainment and large teams. However, this design led to a disconnect between the fans and the players, who in soccer were used to a closer view on the pitch. While this is not a problem isolated to the US only, it acted as a watershed moment for stadium designs. It was apparent that mixed-use adaptability was key for economic and social success; future stadiums were to be designed for not one, but multiple uses, specialized to every function they had.

In 2002 the tournament migrated to Asia. Held across two nations—South Korea and Japan—it set a precedent for the modern stadium. Due to the lack of suitable existing venues, the host countries had to build the majority from scratch, hoping to generate a significant football legacy.

Building upon the lessons learned from years of case studies, the new stadiums were mixed-use, iconic, fan-centric, but also corporate enough to turn a match day profit. Inspiration drawn from historic typologies was visible, and was adapted to the era’s architectural climate—with new technologies and analysis leading to a research-driven venue that maximized the experience for all. The Oita Bank Dome by Kisho Kurokawa, which hosted several games throughout the tournament, is shaped like a samurai’s helmet to showcase the culture of Japan, while the retractable roof offers year-round usage for sporting events and concerts alike. Even with a running track separating the fans from the players, the front row of seating is elevated to give the impression it had come straight from the field's edge, and in a country without a huge football heritage, the track helps give more purpose to the surrounding community.

New isn’t necessarily always better. While most of the recent or upcoming hosts of the World Cup are trying to build a legacy, in 2006, Germany already had one. The four-time winners of the World Cup have an established league that performs at the highest level, and a grass-roots infrastructure that has been well established since the early 1960s. Tempting as it might have been to rebuild the stadiums, Germany took a stereotypically efficient approach in choosing to focus on the redevelopment of existing stadia.

The magical moments performed on the pitch are often fleeting, yet they live on in the memories of the fans who were in the stadium to watch them. To demolish and rebuild a stadium is to lose the context of these memories, and many relocations to newer arenas are problematic for a club and their fan base. The Signal Iduna Park is home to Borussia Dortmund, a very successful German club, and in the refurbishment of this stadium (originally built for the 1974 World Cup), Architekten Schröder Schulte-Ladbeck continued the existing heritage to create one of the greatest atmospheres in world football. Increasing the capacity up to over 80,000 by filing in the corners with a glazed extension that’s supported by a striking yellow steel structure, the sensitive improvements enhance the heritage and experience of the place with a significantly lower cost.

So where will the future of stadium design take us? In recent projects there seems to be a trend towards the landmark—the more iconic the design is, the better. However, the bold motifs used are becoming more subtle and organic. Herzog & de Meuron’s Matmut Atlantique Stadium is a great example of this notion. Not only is the trend aiming for a more subtle landmark, it is also for the creation of something that is "more than just a stadium."

The controversial Qatar 2022 World Cup is the best example of what the future may hold as, similar to South Korea/Japan 2002, its venues are almost entirely new builds. The final will be hosted at the Lusail Iconic Stadium, designed by Foster + Partners, who have a less restrictive brief than when they designed the successor to the old Wembley. Landscaping the entire area to create a mixed-use facility that stretches far beyond the realm of sport, the project deals with the adverse Middle-Eastern climate to maintain a functioning indoor temperature for players and supporters alike. Will the extension of the stadium’s program dilute the experience, or could the idea of what a stadium is expected to do change forever? 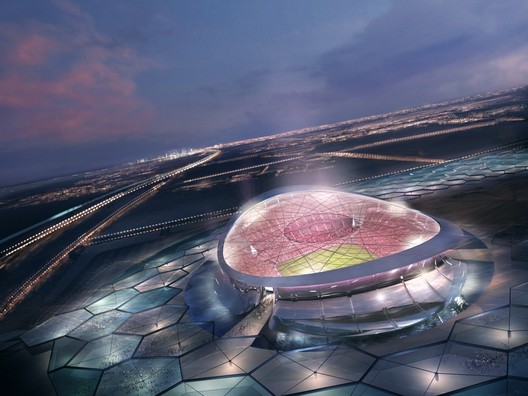