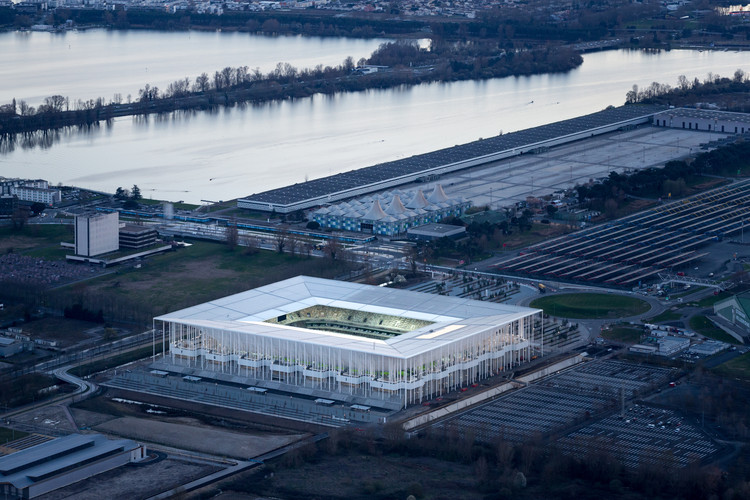 Text description provided by the architects. The new Bordeaux stadium appears light and open; it is elegant, if such a term can be used for a building of this size. Its purity and geometrical clarity inspires a sense of monumentality and gracefulness. One might be tempted to draw a comparison with a classical temple, but unlike the elevated plinth of a temple, the grand stairs of the stadium blur the boundaries between inside and outside. Countless columns standing on the stairs accompany the visitors on their way in and out of the stadium. The fusion of stairs and columns forms a gesture of openness and accessibility.

Special attention was paid to the integration of the structure into the grand landscape of Bordeaux. The meticulous geometrical arrangement of bowl structure and columns reflects the pattern created by trees and paths in the surrounding landscape. This stadium is made for this specific place - an open, flat landscape in immediate proximity to the Bordeaux Exhibition Centre stretching along the lakefront. “Elegance" has become a depreciated term when describing architecture, but wrongly so when one looks at Bordeaux' urban and architectural legacy. We were never looking for inspiration in the historical part of Bordeaux with its breathtakingly beautiful buildings and monuments all made out of typical limestone. Much of what we perceive as elegance in Bordeaux results from its unity and homogeneity of scale and materiality and from its precision and purity of form. We could not copy this, but we certainly learned from it.

Seating a maximum of 42,000 people, the bowl embraces the game area, its geometry affording optimal visibility for all, along with the maximum flexibility in terms of capacity and usage. The stadium is multifunctional and conceived to welcome a rich and diversified program: not only rugby and soccer matches but also shows, concerts, and corporate events.

The bowl consists of two superposed tiers divided into four sectors and protected from the elements by the roof. The underside of the visually uniform roof guides the eye onto the playing field while allowing sunlight to pass through. Its structure does not show through on the inside of the stadium, to avoid distracting the spectators’ attention.

Raising the bowl above ground level is a compact base housing all the programmatic functions in a uniform and symmetrical volume. This plinth includes the VIP spaces evenly distributed east and west, and media areas adjacent to the spaces dedicated to players. The architectural simplicity and pure lines of the bowl and its base ensure smooth spectator flows and ease of orientation.

The bowl rests on a plinth, covered by a sharp-edged rectangular roof. The choice of this pure and almost abstract form responds clearly and efficiently to the site’s natural conditions and to the main flow of spectators from east to west.

This white rectangle seems projected earthwards thanks to the multiplicity of slender columns that shower down. A ribbon of food stalls and restrooms undulates through this forest of columns, brought alive by the movement of the crowd. At once dense and light, this structure creates an evanescent rectangular volume from which the sculpted and organic outline of the bowl emerges.

This architectural concept gives a specific identity to the new Bordeaux stadium. The diaphanous volume opens up to the surrounding landscape while the grand stairs express openness and accessibility for everyone. Its transparency reveals all the energy and activities that will transform this piece of land into a new and vibrant part of Bordeaux. 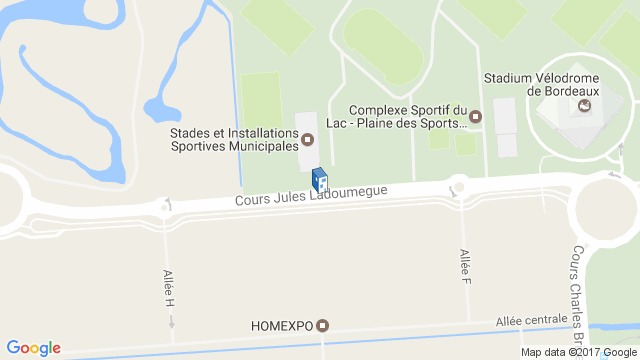 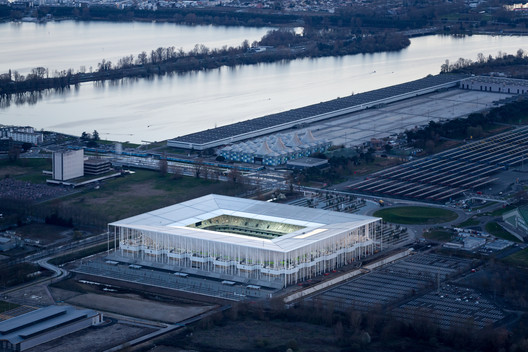