Built for the Minnesota Vikings and designed by Dallas-based HKS, the dynamic, angular symmetry of this 1.1 billion-dollar venue invites us to question not only what an NFL stadium should look like today, but also how it should serve as a civic hub for our national pastimes. Citing the precedent set by contemporary buildings like Jean Nouvel's Guthrie Theater, architect John Hutchings of HKS explained that the stadium needed to be "contemporary in its architectural expression." Drawing upon local influences, the architects have achieved a striking form that addresses sustainability issues and allows for a true multi-purpose program.

In the past 15 years, 13 new NFL stadiums have opened. The last closed roof stadium to be built was Ford Field in Detroit (2002). While the trend seemed to push towards retractable roofs, the solution that purportedly gives fans the best of both worlds may not be worth all the fanfare—or the price tag. In a city that has built over 8 miles of connected, climate-controlled walkways in order to navigate downtown during the frigid winter months, a retractable-roof stadium just didn't make sense. HKS convinced the stadium's owner and developer, the Minnesota Sports Facilities Authority (MSFA), to "go with the Minnesota version": a closed stadium with a lightweight, translucent roof and glazed entrances with breathtaking views of downtown Minneapolis.

One thing is certain: this is not your average stadium. Between the wide concourses, high-tech lounges, turf-side suites, a section of telescoping seating and the world's largest pivoting doors, the venue is groundbreaking—and exemplary.

HKS’ John Hutchings told the Vikings and the MSFA that they had "a gem of a site…because of what it could stir for economic development." Built on the same location as the Metrodome, the new stadium is actually twice the size of the Vikings old home. On what is perhaps one of the NFL's most urban sites, the stadium is well connected to light-rail, highways and Minneapolis' unique skyway system. Unlike the Metrodome, which was hard to get to and relatively disconnected, improvements to the site and transportation infrastructure have made it so that "you can literally walk for miles and make it into the stadium without ever even going outside," explained Michele Kelm-Helgen of the MSFA. In addition, it is expected that one third of patrons will arrive at the stadium in a sustainable way, via public transit.

The primary form-givers for the stadium design were climate, geography, history/quality of civic structures, and technology. Minnesota's extreme winters provided perhaps the most pertinent, important design challenge: getting snow off of the roof. HKS tackled this issue in their Dallas and Indianapolis stadiums by designing heavy roofs that could sustain substantial snow loads. For the U.S. Bank Stadium, the architects turned to Nordic vernacular architecture for inspiration, opting for a sloped roof that discourages build-up of snow loads in the first place. Here, the choice of materials plays a significant role as well; the architects anticipate that snow that falls on ETFE section of the roof will melt quickly due to the material's low R factor.

60% of the roof is covered with ETFE; the remaining 40% is hard deck roof. The roof pitches as the single, 989-foot ridge truss that supports the lightweight ETFE and hard deck angles up towards the west end of the stadium. At its highest, the roof peaks at 270 feet, sloping down to 205 feet on the east end. Below the roof, 20 feet of clerestory glass brings even more light into the stadium and makes the roof seem to float above the massive seating bowl.

Even though the stadium looks massive from the outside, the effect is amplified once you're inside of the stadium; a third of the volume is actually constructed below grade. In its normal configuration the stadium holds 66,000 spectators. For occasions that require higher capacity—like the Super Bowl—up to 4,000 seats can be added.

Though the stadium is closed, it does not feel like a classic dome. Even on cloudy days, diffuse light pours in from the roof, clerestory, and from the wall of glass that covers the west side of the stadium. Five of the world's largest doors can also be found on the glazed wall. The MSFA is confident that the doors, combined with the ETFE roof, will make fans feel like they are outside.

HKS told its clients that this would be the "Minnesota version" of a retractable roof, with the largest installation of ETFE in the US. Most notably used before in buildings like the Water Cube and the Allianz Arena, ETFE is cost-effective, self-cleaning and can span great distances. The ETFE panels were fabricated in Germany and measure 10 feet x 300 feet. Once rolled into place and installed, the triple-layer panels are pumped with air to maintain continual pressurization.

Inspired by nearby natural stone formations, the Zinc that covers the exterior provides a striking contrast to the adjacent glazing. Early renders show the building with a lighter shade of Zinc, but the architects fell in love with the darker version— which subtly changes tone depending on the weather conditions.

Once the design was finalized, animal rights activists voiced concern about the possible dangers that all the glazing might present to birds. The MSFA responded by reaching out to 3M, and will implement infrared films in the event that the building in fact proves hazardous to animals.

Built by Mortensen, the same company contracted to build Frank Gehry's challenging Walt Disney Concert Hall, the stadium's construction is expected to take a total of just 31 months. The project broke ground in December of 2013 while the Metrodome was actually still in use. Using 4D technology, the contractors built the stadium virtually in 3D, and added the dimension of time to project possible conflicts and scheduling challenges. "We can literally look at any given day in the construction of the project and see what the building is intended to progress to by that point," explained Mortensen's Senior VP, John Wood. Thanks to this thorough planning, the building is actually ahead of schedule and will be complete on opening day (July 29, 2016). This is the largest construction project to date in the state of Minnesota.

In order to ensure that the Viking fan experience is one of the best in the league,  much attention has been devoted to the stadium's technology. A high-percentage of fans will arrive with their smartphones, and the Vikings hope to use technology to guide and inform fans throughout the entire day—from when fans are en-route to the stadium, navigating to their seats, or ordering food and beverages from the stands. The real challenge is to ensure that the Wi-Fi network is capable of accommodating all the fans, vendors and staff. The team expects that 30,000 fans will use Wi-Fi in the stadium, but they are prepared for a surge in usage (for the Super Bowl, for example). For this, 1,300 access points have been carefully installed into stadium handrails.

U.S. Bank Stadium is the first NFL stadium to include LED sports lights. This not only reduced installation loads by 37% percent, but the LEDs will also consume 75% less energy compared to traditional lights. In addition to improving the overall lighting conditions—which, thanks to the LEDs, will be more uniform and adjustable—operators will be able to switch lights on and off quickly.

Finally, two high-quality scoreboards have been placed in fans' optimal sight lines, on each end zone. The idea is that spectators won't have to look up, and thus don't have to look away from the action. 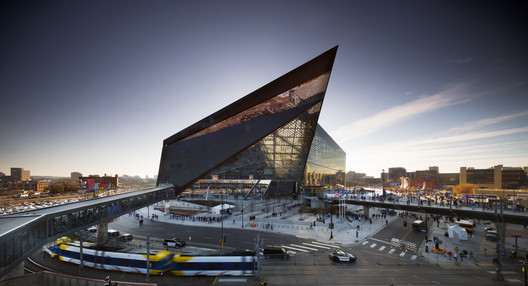