Minnesota: The Latest Architecture and News

Star of the North: Uncovering a New Architecture in Minnesota

Architecture draws together influences in art, culture and daily life. When designing for local communities and sourcing regional materials, architects often take inspiration from vernacular traditions. Utilizing traditional materials and resources from the area where a building is located, they draw from local climates and a history of building and ideas. Building sites around the world are diverse locations shaped by new construction technologies, past techniques, and changing conditions of cultural life. 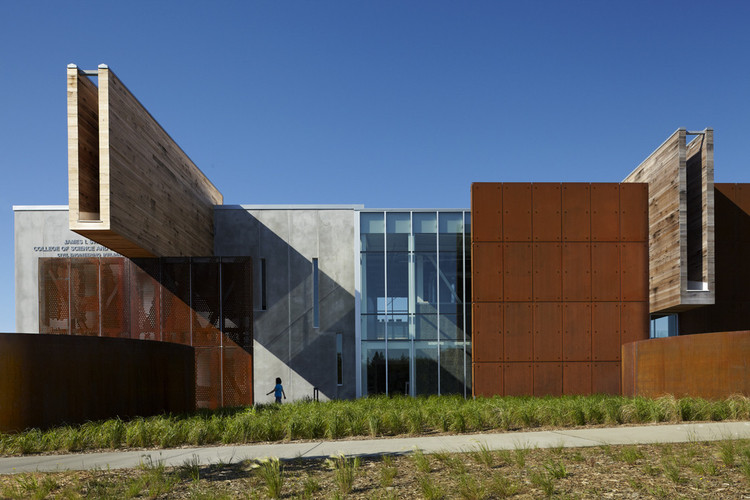 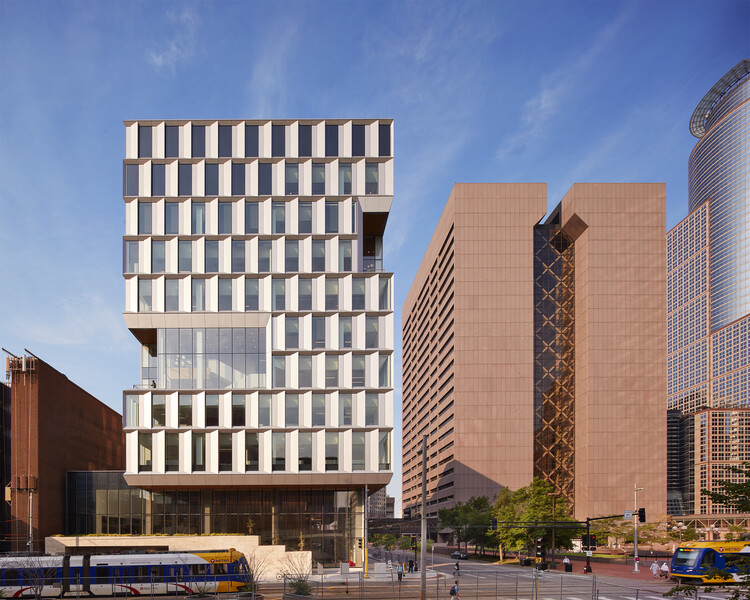 The New York practice SHoP Architects has been selected to design the Upper Harbor Terminal Community Performing Arts Center (CPAC) in Minneapolis, Minnesota. Sited on the Mississippi River waterfront, the center will be designed for First Avenue Productions as a year-round epicenter for live music and entertainment. SHoP's design aims to engage the community and its context to embrace the musical and cultural legacy of North Minneapolis.

What Does it Take to Design a Super Bowl Stadium?

On the 4th of February, Minneapolis will host the New England Patriots and the Philadelphia Eagles for the 52nd Super Bowl. With over 100 million people expected to watch the game this Sunday, all eyes will be on the city of Minneapolis—a city known for not allowing the harsh climate get in the way of their celebrations—and the brand new US Bank Stadium, where a huge permanent roof will ensure that, come rain, shine, or snow, Minneapolitans will have a space to gather and enjoy themselves.

HKS Architects took on the challenge of designing the stadium to replace the Minnesota Viking’s previous home, the Metrodome, which was known as "Minneapolis’s living room" for the strong relationship it had with the population as both a civic hub and a stadium. Unlike past stadiums the Dallas-based architects have designed, the US Bank Stadium required a different outlook, with a focus on designing a catalyst for public infrastructure and a communal space that provokes interaction with the community. So how did they achieve a structure that can both host the Super Bowl yet remain a prominent part of the city for years to come? We spoke to the lead architect on the US Bank Stadium, Lance Evans, about how to design and construct the centerpiece for one of the biggest sports events of the year. 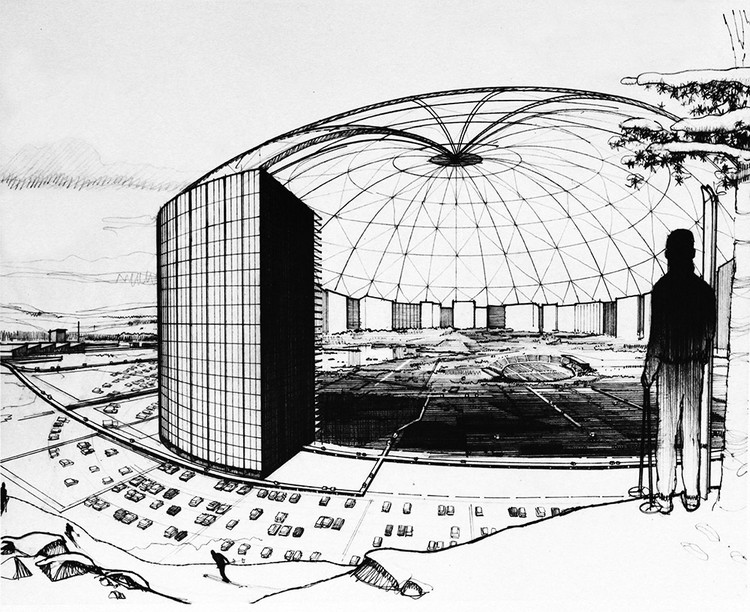 The Minneapolis Institute of Art (MIA) has selected David Chipperfield Architects to lead the design of a new masterplan for the museum that will “enhance the visitor experience and to expand the community’s access to the museum as a community resource.”

The planning process will aim to diagnose potential improvements and provide a conceptual solution for a long-term growth plan for the Museum. Several pressing needs have already been identified, including improved parking facilities, additional art storage and increased and improved public gathering spaces. The Museum also hopes to question the current visitor circulation, as well as consider upgrades to their restaurant and auditorium.

The Society of Architectural Historians is now accepting abstracts for its 71st Annual International Conference in Saint Paul, MN, April 18­–22. Please submit an abstract no later than 5:00 p.m. CDT on June 15, 2017, to one of the 45 thematic sessions, the Graduate Student Lightning Talks or the open sessions. The thematic sessions have been selected to cover topics across all time periods and architectural styles. SAH encourages submissions from architectural, landscape, and urban historians; museum curators; preservationists; independent scholars; architects; scholars in related fields; and members of SAH chapters and partner organizations.

A Catalog of Difference

Designer and artist Andrew Lucia generates a catalog of theoretical objects from the ambient light and curvature specific to their environments of origin. Through a series of novel visualizations, Lucia speculates on the role of ambient light as an underlying force and active agent in the figuration of these new hypothetical worlds and entities.

Architecture as Catalyst is an annual week-long event, bringing new ideas, conversations, and expertise to the school by inviting guests from around the world to run experimental workshops with graduate students and give public lectures on their work. Each year, the week before spring break, first and second year graduate architecture students engage with the guests and host faculty in intensive five-day workshops, each focused around a unique set of ideas and techniques.

A Belarus-based rendering studio, iddqd, have faithfully recreated Marcel Breuer's St. John's Abbey Church in a series of highly detailed images representing both the building's interior spaces and iconic external volume. The first in a long-term project called 'Unforgotten Heritage', this collection of drawings are complemented by a movie which shines a spotlight on a building which, according to the artists, "might otherwise be forgotten."

For most schools, receiving an M.Arch requires 2 to 3 years, and, according to NCARB, IDP towards licensure takes an average of slightly over 5 years, excluding the time to take the exams themselves.

The University of Minnesota School of Architecture is offering two degrees that will significantly reduce IDP requirements—pending approval by NCARB— and thus reduce the time it takes to attain one’s architecture license. Two M.S. programs, an M.S. in Architecture Research Practices and an M.S. in Architecture Metropolitan Design are designed as additional year-long degrees attained while students pursue their M.Arch’s. Even better, both are structured to not only help students attain up to 930 IDP hours toward completing the degree, but to defray tuition while doing it.

The Urban Land Institute (ULI) has selected the finalist teams in the eleventh annual ULI Gerald D. Hines Student Urban Design Competition. Graduate-level student teams representing Harvard University, Yale University, a joint team from Ball State University and Purdue University, as well as another join team from Kansas State University, the University of Missouri-Kansas City, and the University of Kansas are all advancing to the final round of competition, scheduled to take place in March and April. This year’s finalists were charged with proposing a long-term development plan for downtown Minneapolis that creates value for property owners, city residents, and the greater Twin Cities region.

Serving as the foremost resting place for Minnesota’s distinguished citizens, the Lakewood Garden Mausoleum, designed by HGA, is a treasured landmark and community asset in the city’s neighborhood. The video above captures its pastoral quality and embraces the landscape while offering a contemplative interior experience. It also highlights the design’s relationship between natural light and nature, which strengthens the connection between the spiritual and the earth-bound.

EE&K, a Perkins Eastman Company, and Knutson Construction were recently selected by Hennepin County for their design for ‘The Interchange’ in Downtown Minneapolis. The design-build contract for the $79.3 million transportation hub, which is expected to be completed by 2014, will connect transit with culture. Led by architect Peter Cavaluzzi FAIA, the multidisciplinary team envisions a state-of-the-art transit station with complementary mixed-used development and year-round activated public space. More images and architects’ description after the break.

This week our Architecture City Guide is headed to the city stars fall on. With a few notable exceptions, one can hardly be called a starchitect if s/he hasn’t designed something in Minneapolis. Since 2005 the starchitects that have fallen on this “City of Lakes” include Jean Nouvel, Herzog & de Mueron, César Pelli, Michael Graves, Steven Holl, and Frank Gehry. This is a surprising number for a city just north of 380,000 people. Few cities of this size could boast as much. What’s more our list of 12 is far from complete. There are many wonderful historic and contemporary buildings mixed in with the explosion of starchitecture. Please leave comments of buildings one should not miss when visiting Minneapolis.

The Bohemian Flats, located in an old residential area of Minneapolis, Minnesota has a long history of flooding. According to FEMA, the site has a 1% chance of flooding every year. To respond to this history and promote the longevity of the project, the entire structure rests on a PVC (vinyl) floatation system, allowing the building to move in sequence with the unpredictable nature of the site. The boat house also has the ability to move off site and become an extension elsewhere.

Full architect’s description and more images after the break.