Atlanta’s Mercedes Benz Stadium has released a new video showing the structure’s unique aperture-style retractable roof closing for the very first time. Designed by 360 Architecture (now a part of HOK), the eight ETFE-clad roof “petals” slide along tracks on the stadium roof to come together at a central point, much like how a camera operates. When fully operational, the roof will be able to open and close in less than eight minutes.

According to the Atlanta Journal Constitution, despite the mechanics being in place, the roof will remain in the closed position during the stadium’s debut for an exhibition game between the NFL’s Atlanta Falcons and Arizona Cardinals on August 26th, as the automation for the system has not yet been programmed.

First announced in early 2015, the 2-million-square-foot stadium is designed to host a wide range of events from the Super Bowl to concerts to the NCAA Final Four. The project is estimated to have cost approximately $1.5 billion.

Check out a construction timelapse and drone footage of the stadium, below: 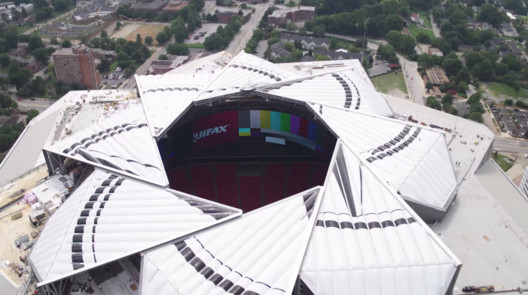