Save
From Prisons to Parks: How the US Can Capitalize On Its Declining Prison Populations
Share
Or
Copy

Prisons are often seen as problematic for their local communities. After centuries of correctional facilities discouraging economic growth and occupying valuable real estate as a necessary component of towns and cities, many of these institutions have been relocated away from city centers and their abandoned vestiges are left as unpleasant reminders of their former use. In fact, the majority of prisons built in the United States since 1980 have been placed in non-metropolitan areas and once served as a substantial economic development strategy in depressed rural communities. [1] However, a new pressure is about to emerge on the US prison systems: beginning in 2010, America's prison population declined for the first time in decades, suggesting that in the near future repurposing these structures will become a particularly relevant endeavor for both community development and economic sustainability. These abandoned shells offer architects valuable opportunities to reimagine programmatic functions and transform an otherwise problematic location into an integral neighborhood space.

Why repurpose prisons rather than starting fresh? The answer to this question lies in the inherent architectural features of the prison typology, namely the fact that these structures are built to last. People also often forget that prison buildings are not limited to low-rise secure housing units - in fact, prisons feature an array of spaces that have great potential for reuse including buildings for light industrial activity, training or office buildings, low-security housing, and large outdoor spaces. These elements offer a wide variety of real estate for new programmatic uses, and cities around the world have begun to discover their potential. What could the US learn from these examples, at home and overseas? 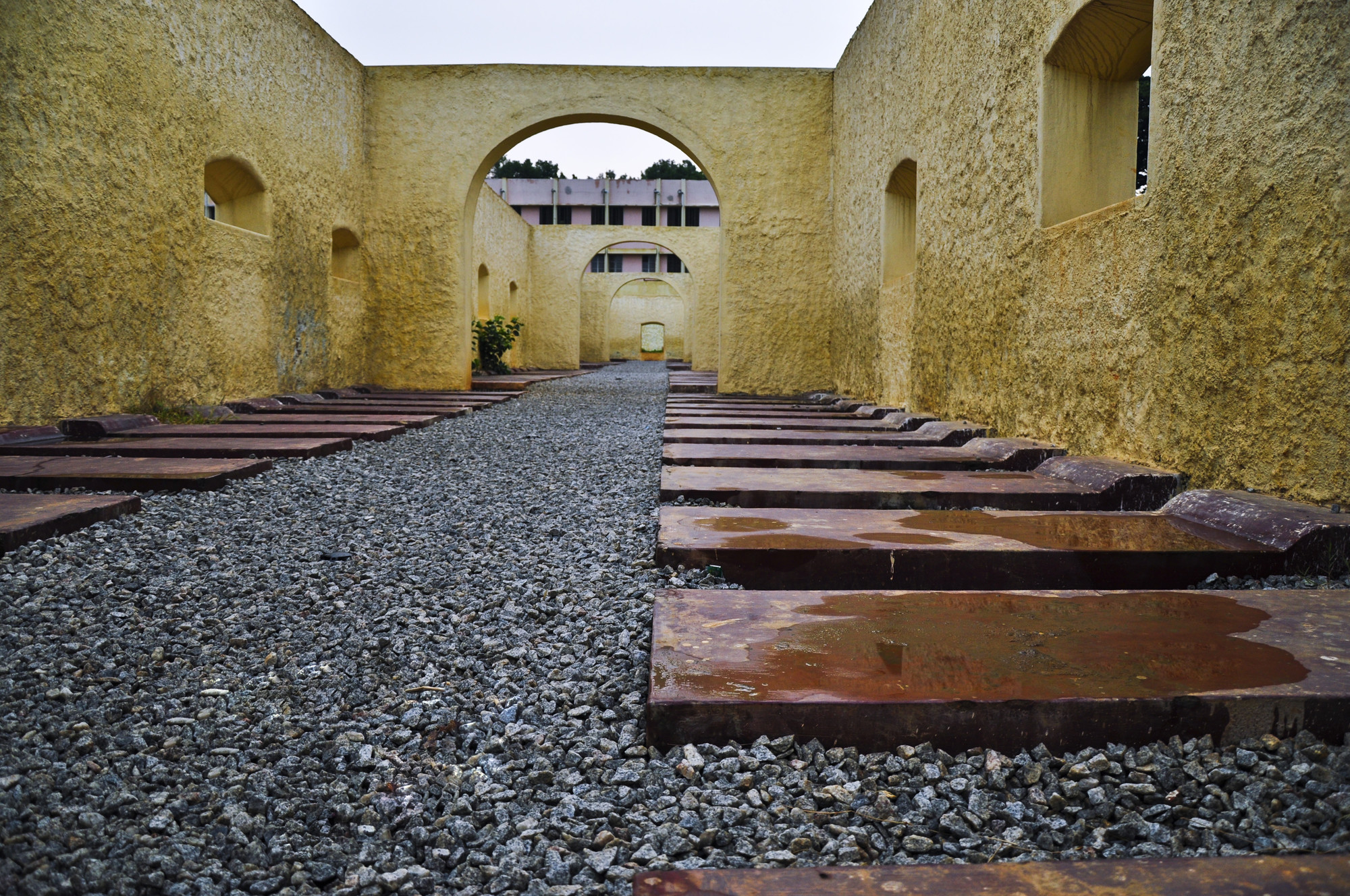 Originally a colonial prison made from bricks imported from England, the site was the location of many executions and a source of unrest in the local community. Today it has been converted to a leisure and arts center which aims, somewhat ironically, to represent freedom and revitalization for the surrounding area. The park features monthly musical acts and community celebrations, yet preserves the thick white walls surrounding the compound. Creatively repurposing the prison’s former programs, the old kitchen has become a food court, the records office is now a museum, and in a macabre yet clever adaptation, the location of the gallows is now the site of a stage for community performances. Some members of the community find solace here as a place to rest and work, with the old prison cells now serving as private study spaces. Under its new functions, Freedom Park represents a cultural adaptation of space and community development, rather than a particular architectural intervention. Here the community whole-heartedly embraced a transformative use for the original prison, creating a vibrant community space purely through minimal alterations and integrating relevant social functions. [2]

A similar example is the former Bangalore jail in India – also, it happens, now known as Freedom Park. The jail was built in 1867 and was closed for renovations after a new jail opened outside the city in 2000. It remained unoccupied from the turn of the millennium until 2008, when Bangalore-based architecture firm Mathew & Ghosh reimagined the jail as a park after a national competition run by the Bangalore city corporation. Their winning design retains many of the existing structures, repurposing them as heritage centers. Additions include landscaping a full ten acres of the park and adding a 150-seat amphitheater in addition to an auditorium. Here the architects were able to incorporate the central tower and the original entrance block as integral components of the new park. Grouped into six broad categories, the park includes programs such as museums and exhibitions, contemporary art spaces, retail, performance spaces, and water features. Recreational features include children’s play areas, running tracks, and several children’s museums. [3]

In contrast, abandoned prisons in already-well-appointed urban locations present an opportunity for their creative reuse as retail, residential and hospitality spaces. If the prison has historic architectural buildings or distinctive features, its revitalization has the potential to attract tourists and specialized programs.

Opened in 2008, London's Clink78 hostel occupies the site of the former Clerkenwell Magistrates’ Court, which operated for nearly 200 years but was closed in 2003. The hostel that now occupies the building capitalizes on the court’s long and varied history, preserving several of the original cells as guestrooms complete with barred doors, bunk beds, and a now-decorative steel toilet. Several of the building’s original courtrooms have been converted into wood-paneled common spaces, and the hostel represents a creative programmatic reuse of a building which makes no attempt to mask its unique history and former functions.

Another, more subtle example is Boston's Liberty Hotel. Completed in 1851 and officially closed in 1990, the former Suffolk County Jail is an architectural landmark and is thought to be one of the best examples of “Boston Granite Style” of the mid-19th century. Designed by architect Gridley James Fox Bryant in the form of a cross, the building’s form facilitated the separation of prisoners and its dramatic three-story arched windows allowed for more light than in any prison previously constructed. These unique architectural features made it easy to adapt the building as a grandiose space, and because it was situated in a bustling urban area, a hotel was an obvious programmatic choice. When it was reimagined as a luxury hotel beginning in 2001, the designers referred to Bryant’s original drawings, and its granite exteriors remain largely unchanged. The 90 foot tall central atrium was preserved and now serves as the core of the hotel, while jail cells with original wrought-iron windows are preserved in the hotel restaurant.

These two examples capitalize on the unique character of their historic roots, creating an architecture that is contemporary but inherently tied to its original functions. But even when prisons are instead located in rural areas, they tend to hold back economic development in their surrounding areas. Repurposing prisons can be an important opportunity to add services such as better schools, employment opportunities, and community spaces where these may otherwise be lacking. In Fairfax County, Virginia the former Lorton Prison is beginning its transformation to The Laurel Hill Adaptive Reuse Plan, a collection of residential, commercial, and retail purposes in an 80-acre mixed-use community.

After officially closing its gates in 2001, the new Laurel Hill development presents a unique opportunity for historic redevelopment, as the prison was one of the first of its kind in the United States to encourage expansive outdoor areas and vocational activities for prisoners. Fairfax County hopes to preserve much of Laurel Hill’s open green spaces, and because the property is on the National Register of Historic Places, many of the exteriors of structures will be kept in-tact. Some of the dormitory buildings which once housed up to 10,000 inmates will be converted into one and two-bedroom apartments, while building facades, guard towers and penitentiary walls will be preserved as they are. [4]

The development is a prime example of adaptive reuse which is encouraging an entirely new development built around the institution’s former campus. This particular example leaves the traces of the existing structures and their functions, transforming the location into not only a historic landmark, but an opportunity for sustained economic development.

As these five examples show, prison infrastructure can be quite valuable because it has the potential to support many other future uses. These examples show that adaptive reuse is a viable method to revitalize local communities struggling with now-unused spaces, and that architects can play a role in the sustainable transformation of these emerging architectural issues. In this way, architects and city planners have the opportunity to reduce negative and costly effects of the declining prison population on infrastructure by instead taking these as opportunities to innovate. Here architects can begin to take on a very different role from their traditional tasks in reshaping the urban environment form the ground up by engaging with existing elements of the urban fabric, examining local social and economic needs and responding to these complex factors appropriately.