Zaha Hadid was born in 1950 in Baghdad, Iraq at a time when the city was seen as progressive and cosmopolitan. Her father, too, possessed that spirit as a high-ranking Iraqi diplomat, serving as the Vice-President of the country's National Democratic Party and briefly as the Minister of Finance during Zaha's childhood. Her parents’ successes allowed the family to provide Zaha with a first-rate education and to travel throughout the world, a series of experiences that proved to have a profound impact on Hadid’s career interests. “When I was a child I traveled every summer with my parents, and my father made sure I went to every important building and museum in each city we visited. We’d go to new cities to learn about architecture,” she said. “I think that’s what inspired my love of buildings.”[1]

After obtaining an undergraduate degree in mathematics from the American University in Beirut, Hadid moved to London in 1972 to study at the Architectural Association School of Architecture. It was here that she designed “Malevich’s Tektonik,” a hotel design based off of the paintings of Russian Suprematist painter Kazimir Malevich, whose works strived to tap into an unseen fourth dimension of feeling through the juxtaposition of pure geometric forms. Her drawings of the project and subsequent paintings experimented with layering and fragmentation, attaching program and structure to the forms outlined by the Suprematist works.

Upon graduation in 1977, Hadid became a partner at OMA, the firm founded by her former professors, Rem Koolhaas and Elia Zenghelis. After working on several widely disseminated and sometimes controversial projects such as the unbuilt Dutch Parliament building in the Hague, Hadid left to form her own practice, Zaha Hadid Architects. She soon received recognition for multiple other projects ultimately left unconstructed, such as "The Peak" in 1982 and the Cardiff Bay Opera House in 1994. By 2001, she had completed just one built work, the Vitra Fire Station, in 1993. Her radical forms took on the visual appearance of defying gravity, leading many clients and contractors to believe they simply couldn’t be built. But following the completion of the Bergisel Ski Jump, in Innsbruck, Austria, and the Richard and Lois Rosenthal Center for Contemporary Art, in Cincinnati, Ohio, Hadid was awarded the Pritzker Prize, the first to be given to a woman. This was a turning point in her career, as the increased attention she received led to more clients, higher budgets, and more completed works.

Soon after this turning point, a stylistic change also occurred. Always one to challenge accepted notions of architecture, the larger project scopes and larger budgets gave Hadid further means to push the boundaries of structural possibility. In her design for the Phaeno Science Center in Wolfsburg, Germany, completed in 2005, the relational norms between horizontal and vertical planes were broken down, and entire surfaces were called upon to work as a unit to support the building. This kind of structure demanded composite mathematics previously too complex for engineering minds to solve at this scale. As a result, new software was designed along with the building, giving engineers lighting-fast answers to user input. This today is known as parametricism. As Alan Yentob explains in his documentary about Zaha Hadid for the BBC, “The Science Center in Volksberg marked a step change in her practice. It was a conceptual leap away from the jagged towards the elephantine, the snaking, the snail-like, made easier by what became known as parametricism.”[2]

Following this breakthrough, Hadid became one of the most prevalent and renowned architects of the 21st century. Projects have included the back-to-back Stirling Prize winners the MAXXI Museum in 2010 (perhaps the last example of Zaha’s earlier Suprematist style) and the Evelyn Grace Academy in 2011, as well as a bevy of critically-acclaimed projects, including: 2010's Guangzhou Opera House (a direct descendent of the Cardiff Bay design, according to The Guardian's Jonathan Glancey); 2011's London Aquatics Centre, and Glasgow's Riverside Museum, winner of the European Museum Academy Micheletti Award 2012; 2012's Galaxy Soho in Beijing; and the 2014 "Design of the Year" Heydar Aliyev Center.

But Hadid also remained a controversial figure, and these achievements did not come without some tension. ZHA’s designs for the National Stadium in Tokyo were scrapped over worries of ballooning costs. In 2014, the firm was repeatedly attacked in the media for the politics behind their designs, and Hadid was most notably criticized for a remark she made on the working conditions for construction workers in Qatar, culminating in Hadid filing a defamation lawsuit over the publication incorrect statements by the New York Review of Books.

Regardless of those criticisms, Zaha Hadid’s striking visual constructions and their influence on the world of architecture are undeniable, a fact that became all the more clear after the outpouring of grief at her untimely death, and the many tributes that followed from all areas of architectural discourse. Perhaps her design intentions can best be summed up in her question: “There are 360 degrees. Why stick to one?”

See all of Zaha Hadid's completed works on ArchDaily via the thumbnails below, and further coverage via the links below those:

Tributes Pour in With News of Zaha Hadid's Passing

Reflections on Zaha Hadid: A Compilation of Introductory Remarks

The Creative Process of Zaha Hadid, As Revealed Through Her Paintings

On a hillside outside of Moscow, amongst 65-foot-high pine and birch trees, sits the only private house to be designed and built by Zaha Hadid in her lifetime.

Video: Zaha Hadid Discusses the Influence of Kazimir Malevich on her Work 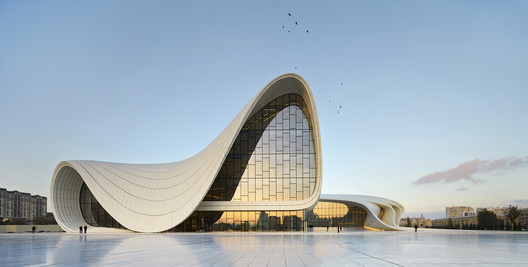