Save
The Miraculous Zaha Hadid: A Tribute by Patrik Schumacher
Share
Or
Copy

It was in 1988, at London’s Tate Gallery during the Deconstructivism conference held in anticipation of MoMA’s eponymous exhibition that I first encountered Zaha Hadid in person. She was lecturing among her six co-exhibitors: Peter Eisenman, Rem Koolhaas, Frank Gehry, Wolf Prix, Bernard Tschumi, and Daniel Libeskind. I had encountered her work a few years earlier as a young architecture student (at Stuttgart University) and was stunned and thrilled by the unprecedented degrees of compositional freedom, versatility and dynamism in her work. Up until then I had not been so sure if architecture was such a good career choice for me. I was rather underwhelmed and bored by architecture but, through my encounter with Zaha’s incredible work, architectural design unexpectedly transformed into an adventure. The bounds of architectural possibilities had shifted. Thirty years later, this sense of adventure continues. Zaha changed our field and changed everything for me.

At the 1988 conference I was also struck by Zaha’s genuine openness in comparison to the pretentious demeanor of the other (male!) protagonists. They were showing off, whereas she showed what she was trying to do. This was my impression, anyway. It was clear to me that these architects represented the most significant new tendency within architecture at the time, and Zaha seemed the most forceful and the most approachable of this group. She was also the youngest of them. At that time I was an exchange student studying in London and expected to return to Stuttgart that year to continue my studies. I changed my plans and joined Zaha’s studio instead. When I was hired we were only four or five people working in a single room: Studio 9 at No. 10 Bowling Green Lane, where she had set up her first proper office three years earlier.

She had hired some of her former students and the office would temporarily swell with additional ex-students who would come in to help us during competition deadlines. At that time our work was mostly competitions and exhibitions, although we also worked on the Berlin IBA project and two small Tokyo projects in a stop and go fashion.

Zaha delivered an unprecedented expansion of the discipline’s repertoire, offering new degrees of freedom to the designer. As her collaborators, we were quick to appropriate and run with the audacious moves she made newly available. Zaha was always giving us plenty of creative freedom. Design was a collective and an internally competitive creative search process in the studio. She was fierce in her demand for novel forms of beauty and brutal in her rejection of our attempts. She explored an uncharted universe of form via very abstract sketches that did not attempt to approach design solutions but only to discover new formal expressions or new spatial concepts. It was our task to ‘translate’ those abstract atmospheric and conceptual hints into more concrete design sketches. She was working with two-dimensional formal structures and we were working on three-dimensional compositions inspired by her formal explorations. The compositional moves we could employ in this attempt were based on her prior, repertoire-expanding breakthroughs, delivering new compositional freedom.

What we did not yet grasp at the time—and I doubt that Zaha herself or anybody else fully understood this then—was the performative empowerment that these new options and degrees of freedom delivered to us as problem solvers. Zaha had expanded architecture’s universe of possibilities, i.e. the designers’ search space in which they seek solutions, and in which unprecedented solutions might be found. From the perspective of an expanded solution space, the constraints of former restricted spaces look like arbitrary dogmas.

What were Zaha’s major expansionary moves? Of course there is the abandonment of the right angle in exchange for hundreds of new angles that could be utilized. However, this was a general (rather than her unique) feature of what was by that time christened “deconstructivism.” I would therefore rather prefer to focus on three wholly original and empowering ‘discoveries’ that Zaha gifted to our discipline. These moves seemed utterly surreal or absurd at first. I guess that’s why nobody else had ever hit upon them.

There is, first of all, the move of translating the dynamic curvelinearity of rapid calligraphic sketching literally into an architectural drawing that was then read as an intended geometry to be built, as opposed to treating the curvature of a rapid sketch as a rough accidental indication of an ideal geometric form, which was then meant to be rationalized into straight lines and arcs. Zaha’s lines display continuously changing curvature and thus offer more versatility. Further, as a function of the changing centrifugal force of the rapid acceleration and deceleration of the hand and pen, the curves and curvelinear compositions display dynamic trajectories that we can recognize as coherent and legible figures, each with its own poise, dynamism and degree of fluidity. A new language of architecture with much-increased versatility when it comes to problem-solving, and with a much richer, more expressive and more communicative repertoire of organization and articulation, was born. The surreal move was redeemed and instrumentalized by taking these sketched curves, hardlining them with the use of an expansive range of “French curves” or “ship curves,” and thus taking them seriously as the elements with which to solve the plan.

There was a second, equally surreal a move, with equally as surprising performative fertility. We built up pictorial spaces within which multiple perspective constructions were fused into a seamless dynamic texture. One way to understand these images is as attempts to emulate the experience of moving through an architectural composition, revealing a succession of different points of view. Another, more radical way of reading these canvasses is to abstract them from the implied views and to read the swarms of distorted forms as a peculiar architectural world in its own right, with its own characteristic forms, compositional laws and spatial effects. One of the striking features of these large canvasses is their strong sense of coherence – despite the richness and diversity of forms contained within them. There is never the order of monotonous repetition; the field continuously changes its grain of articulation. Gradient transitions mediate between large quiet areas and very dense and intense zones. Usually, these compositions are poly-central and multi-directional. All these features are the result of the use of multiple, interpenetrating perspective projections. Often the dynamic intensity of the overall field is increased by using curved (instead of straight) projection lines. The projective geometry allowed us to bring an arbitrarily large and diverse set of elements under its cohering law of diminution and distortion. The resultant graphic space very much anticipates the later—and still very much current—concepts of field and swarm. The effect ultimately achieved is very much like the effects currently pursued with curve-linear mesh-deformations and digitally simulated “gravitational fields” that grip, align, orient and thus cohere a set of elements or particles within the digital model. The third move was the introduction of gradients into the repertoire of architecture.

All three of these moves came together in the potent landscape analogy which Zaha had posited as a guiding inspiration. Instead of dissecting and ordering space by walls, the landscape analogy suggests a continuously flowing space where zones bleed into each other, where transitions are soft, where a smooth topographic ground relief, rather than hard edges, structures spatial relations.

It was through these unexpectedly and, indeed, miraculously productive and persuasive design moves and strategies that Zaha Hadid conquered and transformed her field, giving it a new magic. 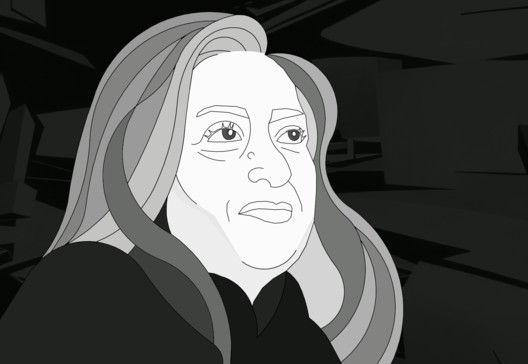