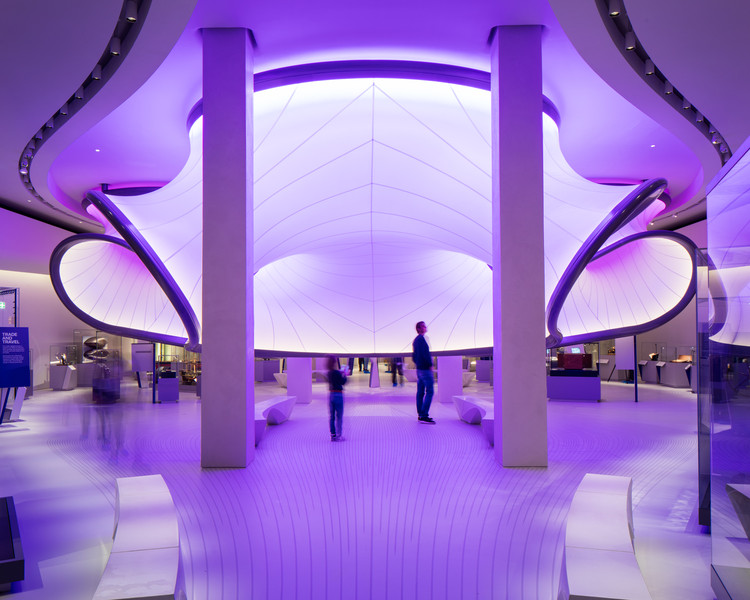 Text description provided by the architects. It is a wonderful coincidence that we started work designing the Science Museum’s Mathematics Gallery in the bicentennial year of the birth of Ada Lovelace, a pioneering woman in the history of computers and of ‘poetic science’. Her inspirational influence on our approach to the design of the project, from inception to completion, cannot be overstated. Just as her Notes unravelled the abstract world of the analytical engine and its logic to generations beyond, we hope the design of the Mathematics Gallery complements the curatorial ambitions to inspire and engage further generations with the instinctive and physical aspects of mathematics. Collections like those housed within the Science Museum in London are instrumental in allowing the human mind to explore the many dimensions of innovation. The new group of objects on display in the Gallery is meticulously curated to narrate seemingly everyday moments in innovation driven by mathematics.

Our design for the Gallery responds to the ambition of David Rooney and his team to present mathematics not as an academic concept, but as a practice that influences technology and enables the environment around us to be transformed. Mathematics and its tools have always played a central role in the evolution of the human understanding of nature and the constructed world:
for example, Sir Isaac Newton’s methods to derive the laws of gravitation, Henri Poincaré’s extension of the Cartesian geometries to the planetary system and Lord Kelvin’s use of the mathematical technique of curve-fitting to predict the tides.

Mathematics forms one of the cornerstones of the foundations of computing and of scientific methods of research within architectural practices. It has had a profound influence on architectural shapes and forms (known as morphology) and their origins, basing them on sound structural principles. The enhancement of the performative aspects of design with respect to the built environment, its manufacture and ultimately the comfortable navigation by people within these environments, forms an integral part of building on these foundations.

With historical training in geometric methods to understand morphology, architects are well positioned to contribute to this collaborative endeavour of delivering information-rich settings that support the complex needs of humans within the built environment. A large proportion of our own work emerges from our fascination with mathematical logic and geometry, with advances in design technology enabling us to rethink form and space. The fluid surfaces and structures of each project thus generated are defined by scientific innovations. Our design for the Mathematics Gallery realises such an effort.

The successful flight of the Handley Page aeroplane in the 1929 Guggenheim competition, with its short take-off and landing distances, represents a triumphal moment in the accessibility of aviation to ordinary men and women. The spatial organisation of the Gallery places a central emphasis on this important product of British aviation, and the transformational capacity of mathematics and science, by taking inspiration from one of the key moments in the flight of the plane and the concepts of aerodynamics embodied within.

While mathematical logic and geometry can provide an intuitive model to understand the natural world, computational tools allow us to examine scenarios that enable a nuanced understanding of the mechanisms of nature. Using the principles of a mathematical approach known as computational fluid dynamics which acts as an organisational guide, the layout of the Gallery allows for the virtual lines of airflow to be manifested physically. The positioning of the more than 100 historical objects, and the production of robust arch-like benches using robotic manufacture, all embody the mathematical spirit of the brief. The resulting spatial experience created by these components within the Winton Gallery enables visitors to see some of the many actual and perceivable ways in which mathematics touches our lives. 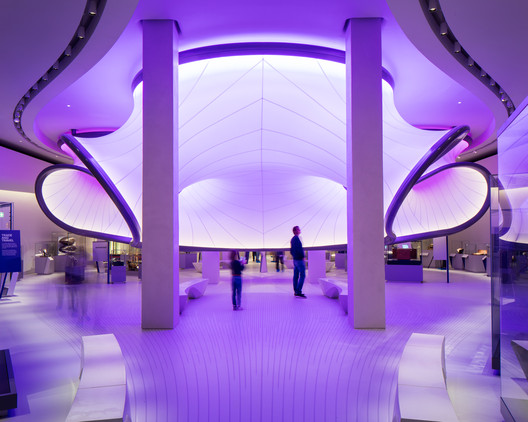