The motto of the Solar Decathlon Europe 21/22 was to convert and expand rather than to demolish and reconstruct. Recycling windows, using biodegradable materials for luminaires and connecting light with sensors represented just some innovative examples of the international university-level student competition in Wuppertal, Germany. For the first time, the competition presented an award for sustainable architectural lighting. This was a question of quality as much as quantity, and that applies equally to daylight and artificial light. 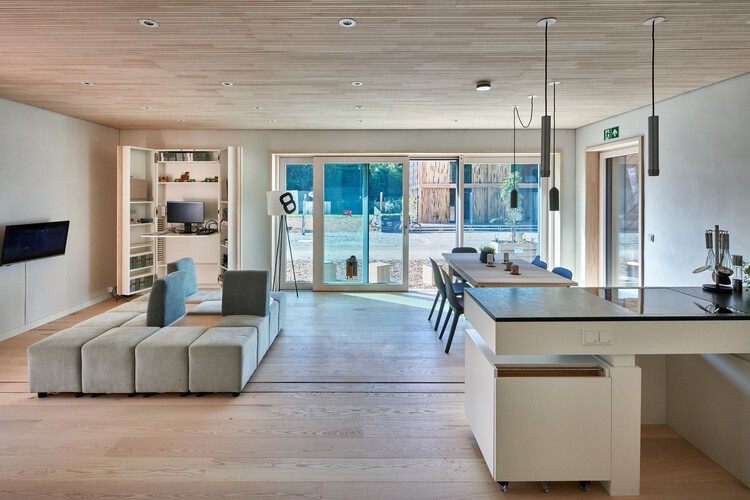 The United States Secretary of Energy Jennifer M. Granholm announced the winners of the 2021 U.S. Department of Energy (DOE) Solar Decathlon, a competition that challenges architecture and engineering college students from around the world to design and construct high-performance buildings powered by renewable energy. 72 competing teams hailed from 12 countries and designed energy-efficient residential and commercial spaces, nine of which were constructed and presented in the Solar Decathlon Virtual Village on the National Mall, a first of its kind, in Washington, D.C. 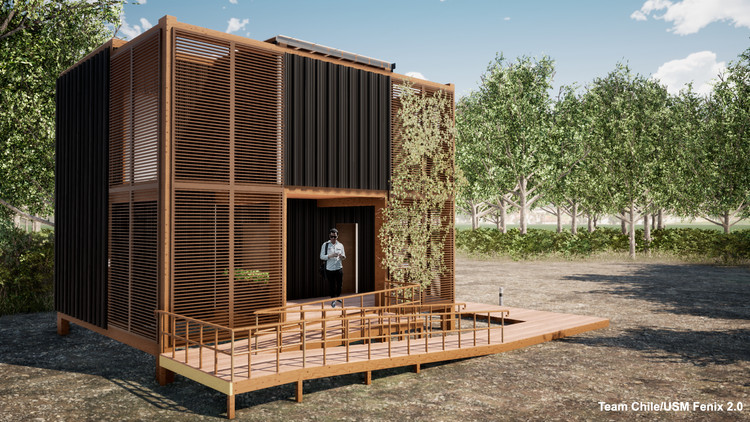 18 Teams from 11 countries go urban, poised to embark on the Solar Decathlon Europe 2021

The Energy Endeavour Foundation & the SDE21 Organisers in Wuppertal, Germany, are delighted to announce the competing Teams for the upcoming Solar Decathlon Europe (SDE) Competition, set for late summer 2021.

NJIT's Solar Decathlon Studio will be hosting a gallery exhibition showcasing drawings and 3D models of D.O.T.T.I.E. (Digitally Operated TecTonic Integrated Environment), a single-family, sustainable house that integrates the digital and the analog, local traditions and global considerations, and designers from the U.S. and China. The house, a modular structure that can be digitally fabricated, is inspired by Chinese vernacular architecture and will accommodate four generations. The design will be judged in July after the house is built in Dezhou, China.

From Dusk to New Dawn: How the Solar Decathlon Can Be Saved

With the close of the seventh Solar Decathlon competition last month in Irvine, California, we couldn't help but reflect on our own experience in the 2013 competition as leaders of Start.Home - Stanford University's first entry into the US Department of Energy (DOE)'s biennial net-zero energy home competition which ultimately placed fifth. With the advantage of two years of hindsight, we can now clearly see that our experience in the Decathlon has had incredible educational value to us, not only as students of architecture and engineering, but also as leaders and future professionals in interdisciplinary projects.

However, echoing recent sentiments on ArchDaily, we feel it is unclear whether the Solar Decathlon still has any of the other values it set out to have; namely to showcase cutting-edge renewable and sustainable technology in residential building design to industry and the public. In fact, as the competition looks ahead with uncertain governance and sponsorship, without some serious reexamination of its fundamental goals the Solar Decathlon may be facing its own setting sun. How did the Solar Decathlon reach its current state of irrelevance? More importantly, how should it innovate to see a new dawn in the coming years?

Is the Solar Decathlon Still Relevant?

Is the Solar Decathlon Still Relevant? The short answer is “yes,” but probably not for the reasons the United States Department of Energy intended.

The Solar Decathlon, currently underway at Orange County Great Park, in Irvine, California, “challenges collegiate teams to design, build, and operate solar-powered houses that are cost-effective, energy-efficient, and attractive.” The overall goal of the competition is to demonstrate the viability of solar power to the public, while also providing the participating students with hands-on design, engineering, and construction experience. When the first Solar Decathlon took place in 2002, the viability of solar power was anything but certain, and the venue on the National Mall in Washington DC gave credence to the pursuit of energy efficiency and renewable energy sources. 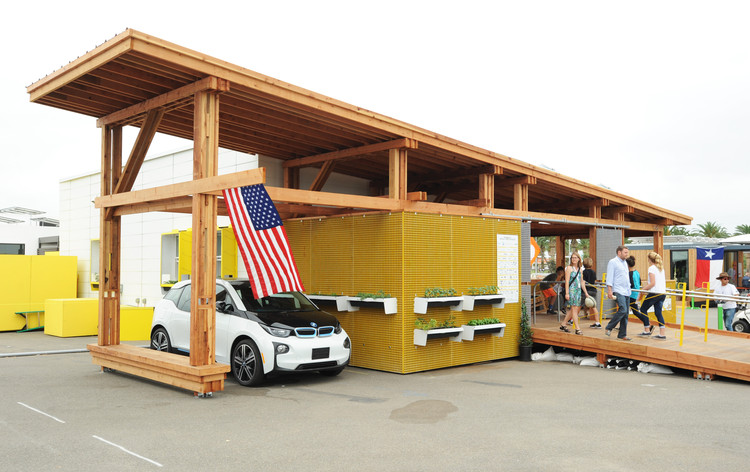 The Rhode Island School Of Design, Brown University and the University of Applied Sciences Erfurt, Germany collaborated on a passive "fabric" house for the 2014 Solar Decathlon Europe (which just wrapped up this month - see the winners here). In the following article, originally published on Metropolis Magazine, Martin Pedersen reviews the remarkable house.

This summer’s 2014 Solar Decathlon Europe is well underway in France, where a solar-powered village of twenty sustainable homes designed and built by college students from all over the country, has emerged on the grounds of the Palace of Versailles. Students from the Rhode Island School of Design (RISD), Brown University, and the University of Applied Sciences Erfurt, Germany, have teamed up for Techstyle Haus, an 800-square-foot house that’s not only a model of energy efficiency but an elegant piece of design as well.

The U.S. Department of Energy has selected 20 collegiate teams to participate in the 2015 Solar Decathlon at Irvine, California’s Orange County Great Park. The eight returning teams will compete against 12 new teams, with partners from four international schools, to build “solar-powered, highly energy-efficient houses that combine affordability, innovation, and design excellence” within the allotted two-year period. View the full list of competitors, after the break.

DALE, short for Dynamic Augmented Living Environment, is this year's U.S. Department of Energy Solar Decathlon entry for the SCI-Arc/Caltech team. Made of two movable, prefabricated modules that open to allow the outdoors in, DALE celebrates the active California lifestyle through its dynamic architecture.

DALE learns from two classic California precedents: the super-sized suburban tract home and the compact, sufficient bungalow; amending one and expanding on the other to become a new Southern California typology. At 600 square feet, it is a micro house with an unprecedented flexible interior that results in the program of a house three times the size.

Stanford University's Start.Home has won fifth place overall and tied for first place in affordability in the 2013 Solar Decathlon. Read the team’s description to learn more:

For the U.S. Department of Energy Solar Decathlon 2013, Stanford University designed the Start.Home to provide energy efficiency at the push of a button to a new generation of environmentally conscious occupants. With modular architecture and advanced controls to optimize each component, the house aims to spark a revolution by lowering the entry barrier for an ultra-efficient house and making sustainability trendy, social, and affordable.

Text description provided by the architects. This "L-shaped" energy smart house by the Stevens Institute of Technology (SIT), dubbed Ecohabit, won second place in the architecture category and fourth overall in this year's Solar Decathlon competition. The L-concept divides the house into two modules, "wet" and "dry". Read the team's description to learn why: 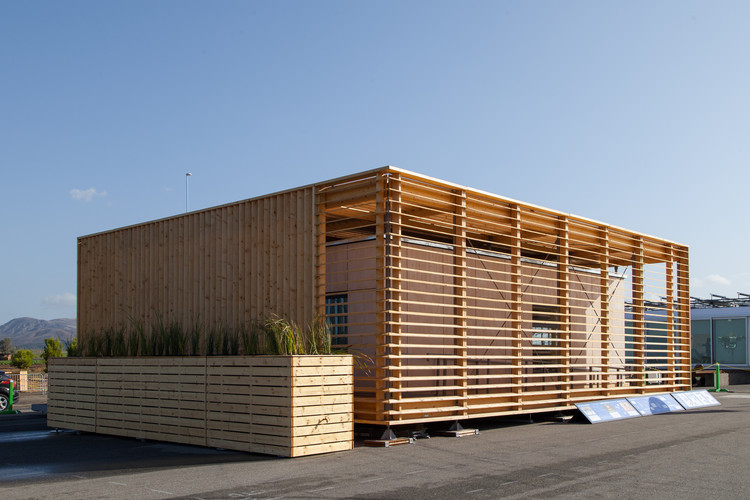 Text description provided by the architects. Placing second overall, just a few points behind the winning 2013 Solar Decathlon team, students from the University of Nevada Las Vegas (Team Las Vegas) have won the “Market Appeal” contest at the Department of Energy’s (DOE) sixth solar-home competition. Known as “DesertSol”, the project was lauded for its “livability, marketability and constructability” as well as its “appeal within the housing market of the target client chosen by team.” It is designed to be a self-reliant, energy-efficient second home for upper-middle income Americans who pursue active lifestyles in the sparsely populated Mojave Desert. Read on for the team’s project description.

A team of Austrian students from Vienna University of Technology (Team Austria) has won top honors for “designing, building, and operating the most cost-effective, energy-efficient and attractive solar-powered house” at the 2013 U.S. Department of Energy (DOE) Solar Decathlon. The net-positive home, known as “LISI – Living inspired by sustainable innovation,” prides itself for being a simple, smart house that is capable of adapting to a variety of lifestyles and climate zones.

Prior to being crowned as winner, LISI competed against eighteen other student-built, solar-powered homes over the course of ten days in Irvine, California. This was the first time an Austrian university has participated in the U.S. Solar Decathlon. Learn more about the winning design by reading the team’s project description after the break. 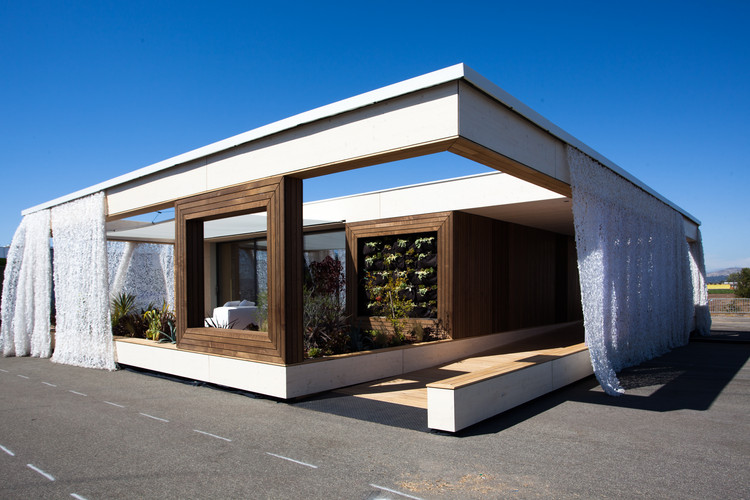 The Indicator: Why the Solar Decathlon Should Enter the Real World

I don’t mean to poo poo the US Department of Energy’s Solar Decathlon project, but the more I hear about it the more I wonder if this isn’t an indication of just how far behind the United States is in terms of energy policy and the design of smart environments. Are we really that far behind that we need a program like this to prove this stuff really works? Are people still disbelieving? Do they really need demonstration homes to show how photovoltaics produce electricity or how sustainable principles can be applied to architecture? I suppose it makes sense in a country that still obsesses about the Case Study Houses and has debates about climate change.

The purpose of the Solar Decathlon is primarily to educate the public on high-performance building practices. Since 2002 when the DOE held the first one, it’s been putting “green” building in front of people who otherwise would not get to experience it—or, in reality, a self-selecting population of people who are probably already into such things.

Looking for something to do this week? If you are in the greater Los Angeles area, come check out the U.S. Department of Energy’s (DOE) sixth Solar Decathlon at the Orange County Great Park in Irvine. Currently on view through October 13, this (free!) event showcases nineteen student-built, solar-powered homes that claim to be exemplars of sustainable housing. After being closely monitored by the DOE throughout the length of the competition, one team will be crowned as winner for successfully blending affordability, consumer appeal, and design excellence with optimal energy production and maximum efficiency.

Catch a glimpse of each project, ranked in order of the current standings, after the break.