Text description provided by the architects. Placing second overall, just a few points behind the winning 2013 Solar Decathlon team, students from the University of Nevada Las Vegas (Team Las Vegas) have won the “Market Appeal” contest at the Department of Energy’s (DOE) sixth solar-home competition. Known as “DesertSol”, the project was lauded for its “livability, marketability and constructability” as well as its “appeal within the housing market of the target client chosen by team.” It is designed to be a self-reliant, energy-efficient second home for upper-middle income Americans who pursue active lifestyles in the sparsely populated Mojave Desert. Read on for the team’s project description.

DesertSol takes advantage of the Mojave Desert’s renewable resources to produce a sustainable home that is self-reliant in the severe desert climate. Its unique name was derived directly from the team's goals for the project, which provides “solutions to sustainable desert living” by harnessing “solar energy as the home’s primary fuel source” and embodying the “soul” of the Mojave Desert.

The home is clad in pre-weathered materials that are capable of enduring the harsh desert environment. Structurally, non-traditional framing techniques are used to reduce the usage of certain materials and create a more efficient thermal envelope. In addition to this, a number of energy-saving features have been made to ensure the home will achieve LEED Platinum status. These features include:

In terms of proper water management, DesertSol collects rainwater and moisture and reuses it for evaporative cooling as well as irrigation for landscaping. The home also utilizes clean water and it's extremely useful thermal properties (water transfers heat approximately 20 times more efficiently than air!) in a unique way. Hydronic radiant floor heating system is among the most cost-effective and efficient type of heating systems available.

A host of new technologies are used to give DesertSol's residents an exciting amount of control over their environment. To complement efficient lighting, the home automation system can be used to dim, turn off, and turn on the lighting, even when the occupants are not home. The same level of control is had over the HVAC systems as well. By becoming more familiar with how energy in used, both in terms of real-time as well as historical usage, residents may even be encouraged to save energy. 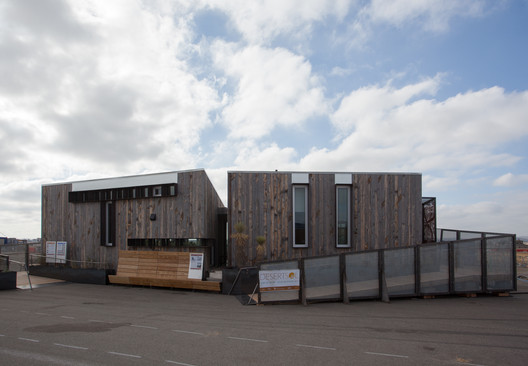