UrbanEden's expandable modular design begins with an ancient urban material, expertly modified to become eco-friendly: pre-cast geopolymer cement concrete. Aesthetically versatile with its many possible surfaces, but always appropriate to a city setting, the concrete provides an effective sound barrier to the noise of the city. In addition to this, by replacing Portland cement with the UNC Charlotte developed fly-ash mixture, the material results in a massive decrease in associated carbon emissions (theoretically up to a 90% reduction) while offering safe use of a waste product of coal production.

The home's southern facade is completely comprised of high-performance glass, which fills the home with natural light and connects the interior to a set of private outdoor terraces enclosed by a vertical garden that provides a peaceful habitat for flora and fauna, as well as herbs and vegetables for sustenance. The deck's commercial green wall system, known as “Wallgarden,” is an easy, do-it-yourself garden made up of individual removable planters that can be easily arranged in a number of configurations. Whether residents choose a full green wall or a small herb garden, all of which can be watered by an efficient, water-conserving drip irrigation system which is fed by the home’s rainwater collection system.

UrbanEden is powered by a 7.65kW array of photovoltaic panels on an adjustable track system over the roof of the house. The solar panels can be moved out over the deck to provide shading to both the exterior rooms and to the southern wall during the summer. The panels can be retracted in the winter to allow the sun to passively heat and light the home through the southern glass wall.

The performance of these panels are controlled UrbanEden’s interactive energy management system. This system measures and displays energy flows of the house, such as electricity consumption or the thermal energy located in the windows or walls, as well as the energy generated by the photovoltaic array. Occupants can monitor how their behavior impacts energy metrics and then may choose to moderate their energy use to improve the efficiency of the house. The system also communicates with the outside, measuring conditions such as temperature and humidity and advising occupants on how to best use the home's technologies to respond to the weather and increase energy efficiency. 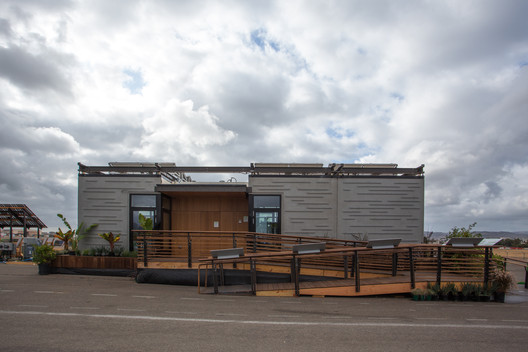