Save
From Dusk to New Dawn: How the Solar Decathlon Can Be Saved
Share
Or
Copy

With the close of the seventh Solar Decathlon competition last month in Irvine, California, we couldn't help but reflect on our own experience in the 2013 competition as leaders of Start.Home - Stanford University's first entry into the US Department of Energy (DOE)'s biennial net-zero energy home competition which ultimately placed fifth. With the advantage of two years of hindsight, we can now clearly see that our experience in the Decathlon has had incredible educational value to us, not only as students of architecture and engineering, but also as leaders and future professionals in interdisciplinary projects.

However, echoing recent sentiments on ArchDaily, we feel it is unclear whether the Solar Decathlon still has any of the other values it set out to have; namely to showcase cutting-edge renewable and sustainable technology in residential building design to industry and the public. In fact, as the competition looks ahead with uncertain governance and sponsorship, without some serious reexamination of its fundamental goals the Solar Decathlon may be facing its own setting sun. How did the Solar Decathlon reach its current state of irrelevance? More importantly, how should it innovate to see a new dawn in the coming years?

Make no mistake - in 2001, the Decathlon was innovative. It forced teams to confront industry and the popular bias that solar energy was unattractive and compromised quality of life. Back then, it was challenging enough for students to artfully place solar panels on a home such that they could collect enough energy to power the house. Yet as solar technology evolved, the competition did not; the constant rise in average team scores since 2001 shows that the competition became easier relative to the state of knowledge and technology. Since 2001, it has even become mainstream to power homes with the sun; for example, California has mandated that all new residential construction be zero net energy by 2020. The proliferation of large residential solar companies such as SolarCity have proven that the technology is economically viable at scale in the private sector. Is a competition focused on demonstrating solar power as “mainstream” even necessary when such policy and economic models exist?

To its credit, the Decathlon has evolved over the years; for example, new rules have placed less emphasis on solar production and more on energy efficiency. However, here too the Decathlon remains out of touch. While EnergyStar has continually improved appliance standards and made the Appliances Contest of the Decathlon (cooking, washing, drying) easier to achieve with fewer panels, no credit has been given to innovation in the Comfort Zone Contest. Here, innovation increasingly comes not from simple manipulation of thermodynamic laws, but from a deeper understanding of psychometrics. The Decathlon enforces strict temperature and humidity bands (71-76 degrees Fahrenheit and 30-70% Relative Humidity) to receive full points, but leading literature on comfort explains that air velocity, direct solar radiation, and other factors contribute equally if not more to perception of comfort, and leading projects such as the Rocky Mountain Institute’s new Colorado headquarters demonstrate that enormous energy savings can be achieved by adaptively heating and cooling only the zones around the users rather than the whole space. Yet if such solutions were proposed in the Decathlon, where sensors are fixed at random locations, the result would be catastrophic for the entrepreneurial team. Far from spurring innovation and disseminating leading thinking on comfort, the Decathlon’s draconian definition of comfort inhibits creativity.

Every architect and engineer knows that constraints are what make the best projects shine. Unfortunately, in competitions there is a fine line between constraints that inspire earnest creativity and constraints that inspire rule-beating behavior. For instance, to ensure energy balance in cloudy Washington DC, the team from Darmstadt in 2009 covered almost every exterior surface of their house with lower efficiency, shingle-like solar panels. While this rule-beating, million-dollar strategy was awarded first place in 2009, it was eliminated from possibility in 2011 with the introduction of the Affordability Contest. Likewise, because 2013 teams were still oversizing their solar systems and energy demands to take advantage of lighter penalties in the Affordability Contest, the 2015 Energy Balance Contest capped total energy consumption to 175 kilowatt hours (kWh). Due to the Decathlon’s points format, teams are less incentivized to optimize energy than to optimize the number points they can get away with. 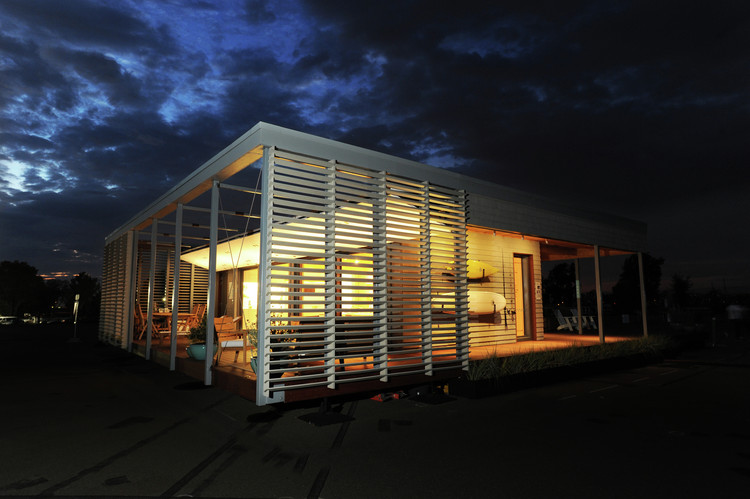 Entering the contest in 2013, our initial goal was to create the best home we could based on the best applications of prefabrication, comfort, automation, and life cycle assessment we’d learned about at Stanford. But since we were in it to win it, we pored over past competitions to find out which strategies worked in measured contests, what appealed to jury tastes in architecture and engineering, and where we had no choice but to bend to the rules. We ended up value-engineering seismic isolation out of our home, not because of its price point (which we could have absorbed as a 1st place winner in Affordability) but because it would have amounted to no more than a few extra points in the Engineering Contest, bringing a net-zero benefit in points overall. Despite our team’s best efforts to maintain our innovative vision, we found ourselves so often plasticizing our design language to conform to jury tastes, downgrading our engineering talent to match contest restrictions, and wasting our time and effort to collect points, that at the end of it all we wondered whether we had sacrificed the best home for a winning home.

However, in an ironic twist, it was the subjectively-judged Architecture Contest which punished us for our rule-beating behavior. Whereas the spread between first and last place in the 2011 Architecture Contest was 16 points, in 2013 it ended up being 38; the spread between first and tenth place in the 2013 Architecture Contest was 22 points greater than any of the other subjective juried contests (Market Appeal, Engineering, Communications, and Affordability) - almost equivalent to the spread between first and sixth place overall. Perhaps this is not surprising to students of architecture or ArchDaily readers, but the Architecture Jury, overpowering its peers and predecessors and praising the avant-garde, almost single-handedly decided the final rankings. In a juror's own words: “Concepts, like emphasizing the mechanical room, just didn’t move me. In my opinion, a mediocre concept, even if well executed, is still a wrong turn.” That same mediocre concept earned us the praise of Market Appeal, Engineering, and thousands of homeowners, and is what we're now working to adapt to provide basic services for low-income housing all around the world.It’s not that juried contests are fundamentally wrong, but given the gravity of points-based competition in the Decathlon, at least in the Architecture Contest, juries may be having the same effect we find in architecture schools around the world, leading teams to prioritize the provocative over the contemplative, the exclusive over the inclusive, the form over the function.

Even if the Decathlon continues to adapt its rules to empower innovation and creativity, its greatest problem is its focus on single-family homes. Back in 2002 the market for single family homes was on the rise, as seen in the figure above. Post-recession, not only has the American Dream of Anytown USA been challenged by innumerable cautionary tales, the growth of multi-family dwelling construction in high-density urban centers has also rebounded, leaving both the Dream and the Decathlon behind. This issue is also inextricably tied to a growing consensus about the impact of automobile culture and sprawl on sustainable urbanism. As much as we like to believe that transitioning to electric cars (which were added to the Decathlon this year as the “Commuting Contest”) will solve our transportation problem, it is really only a solution to reducing existing environmental impacts. Looking at the shiny electric cars parked up and down the Decathlon this year, it's easy to forget that the reason we need cars at all is to serve the housing typology behind them, which has been federally subsidized and marketed to the American public since the 1950s. Transportation is fundamentally a land-use problem, and until the Decathlon acknowledges this head-on, its promotion of electric vehicles will only delay public awareness of the systemic issue of urban mobility.

This brings us to our belief that, in order for the Decathlon to save itself, it must fundamentally change both its structure and its mission. NY City Tech and their DURA home - following the lead of 2012’s French winner CANOPEA and many projects from the 2014 Solar Decathlon Europe in Paris - showcased a design which was intended to be part of larger multi-family and high-density urbanism narratives. Why doesn’t the US Decathlon follow the European model and turn its 2017 round into an urban showcase, complete with student-driven solutions for sustainability and resiliency at the urban scale? Why not reward students for thinking “outside the box” of individual dwellings and illustrating larger ideas of walkability, transit, food, water, and energy in integrated systems?

This shouldn’t be a new concept for the DOE, given their work with the National Renewable Energy Laboratory (NREL) on programs like the Energy Systems Integration Facility (too bad NREL will no longer be operating the Decathlon for the DOE). This also shouldn't break the federal budget to pay for, since it opens up the possibility of engaging the Department of Transport, Department Of Agriculture, and countless other agencies (funding sources) in a breaking down of silos to tackle urban issues. Given that the Decathlon will not be returning to Orange County Great Park in Irvine, which was completely devoid of any urban or even suburban context, why not bring it straight to the heart of major urban centers like Los Angeles, San Francisco, or New York City and have municipalities bid for student innovation addressing real-world issues of housing, mobility, climate change, and socioeconomic inequity? Why not move the focus away from multinational corporate sponsors to local public, nonprofit, and community organizations? As such changes transform the Solar Decathlon into a much more relevant “Sustainability Decathlon,” perhaps this allows the DOE to send powerful messages to industry, academic, and the public: technique over technology, systems over silos, impact over profit.

We would like to think that the feedback process at the end of the 2013 Decathlon influenced the competition to make some changes for the better. It is now the responsibility of the 2015 teams, after a well-deserved sleep, to use this opportunity to make meaningful feedback to the DOE about the future of the competition; this might in fact be their most important responsibility. Only through concerted, constructive criticism can the competition evolve, which is necessary if it is to truly remain relevant. It has shown an ability to do so in the past, but always incrementally. To regain the position at the bleeding edge of the industry that it once held, it needs a greater leap out of its comfort zone - both figuratively and indeed literally - than ever before.

Derek Ouyang graduated with dual bachelor's degrees in architectural design and civil engineering (2013) and a master's in structural engineering (2015) from Stanford University. He is now working in the Bay Area as a lecturer in sustainable urban systems at Stanford and as founder of Cloud Arch Studio, which most recently participated in the SF Market Street Prototyping Festival.

Rob Best is a Ph.D. Candidate in Sustainable Design and Construction at Stanford University where his research focuses on optimization of urban planning and community-scale infrastructure. He received his M.S. in Sustainable Design and Construction from Stanford in 2013 and his B.S. in Engineering from Harvey Mudd College in 2010. He currently also volunteers as the Director of Projects and Education for Engineers for a Sustainable World.

Both were part of Stanford's 2013 Solar Decathlon team which designed Start.Home, coming in fifth place overall.