Brooklyn Bridge Park: What a Design by O'Neill McVoy + NVda Says About the State of Architecture 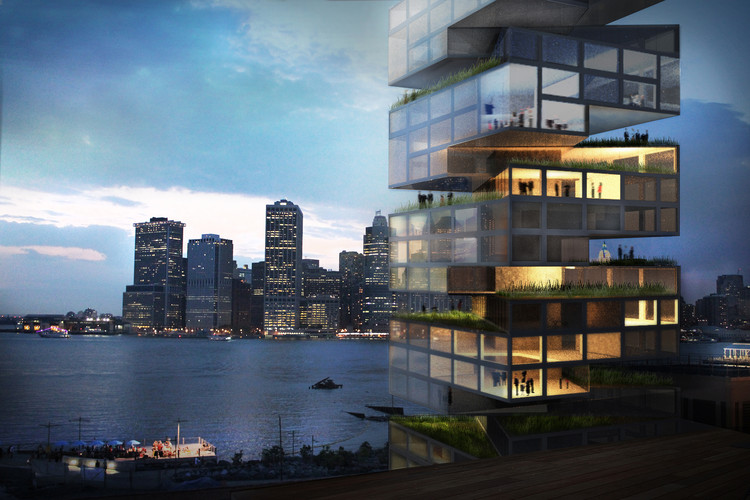 Details have been released on a new residential project designed by ODA Architecture at Brooklyn Bridge Park in New York. Occupying two waterfront sites in the Pier 6 uplands development area, the project will include two10,000-square-foot buildings focused on affordable housing, community development and preserving the surrounding parkland.

Following the news that Studio V Architecture has been commissioned to convert the 19th century Empire Stores, next to Brooklyn Bridge, into 380,000 square-feet of office, restaurant and commercial space, Bjarke Ingels Group (BIG) has unveiled designs for "a flowering meadow with seasonal grasses, a sprawling field and a triangular wooden viewing platform" close by.

After fifty years of neglect the Empire Stores, located next to the Brooklyn Bridge, are now the most coveted waterfront property in New York. Midtown Equity has partnered with Studio V Architecture to adaptively reuse the 19th-century coffee warehouse into 380,000 square-feet of office, restaurant and commercial space, highlighted by a Brooklyn-centric cultural museum. "After the Brooklyn Bridge," says Joe Cayre, Chairman of Midtown Equities, "the Civil War era Empire Stores are the most iconic structures on the Brooklyn waterfront. As a Brooklyn native who raised my family in the borough, it is an honor for my firm to be chosen for the redevelopment of the Empire Stores."

NYDaily News reports that the New York City Council has allocated $7 million to redevelop a 11,000 square foot swath of forgotten land into a beautiful, sandy beach beneath the Brooklyn Bridge. Originally conceived as part of New York’s “Blueway” plan, the waterfront project will grant access to terraced seating, wading pools and fishing areas, along with a kayak launch and concession stand via tree-lined walkways. See what else the “Blueway” entails, here on ArchDaily.

Since it’s opening on September 16th, the Jean Nouvel acrylic encasement and historic Jane’s Carousel has become a landmark in the heart of Brooklyn Bridge Park for New York families. The welcoming public pavilion offers spectacular views of the East River, the Manhattan and Brooklyn Bridges, and the Manhattan skyline.