Save
A Temple Renovation in Hungary and a Wine Center in China: 14 Unbuilt Cultural Projects Submitted to ArchDaily
Share
Or
Copy

The diversity of civic spaces in cities and rural areas have continuously showcased how strongly they explore human connections regardless of program, construction technique, scale, and geography. Ranging from educational facilities and museums, to art centers, libraries, religious halls, and memorials, these projects have enriched urban fabrics with cultural programs that have provided members of the community with places to learn, entertain, create, and unwind.

This week’s curated selection of Best Unbuilt Architecture highlights cultural projects submitted by the ArchDaily community from across the world. From a water management system that targets the natural crises in Egypt to a structurally intertwined memorial in the United States, this round up of unbuilt projects showcases how architects responded to the contextual and spatial needs of their projects through innovative and local solutions. The article also includes projects from Italy, China, Uruguay, Poland, Iran, Hungary, Russia, and the United Kingdom.

Read on to discover fourteen cultural projects, along with their descriptions from the architects.

In the Center of Margrit Island in Budapest, Hungary, old ruins of a Franciscan Monastery are located. The main visible parts of the Monastery are the walls of Szent Klara Church or Temple, so, the proposal was to renovate the site and show the church in its original outer form using contemporary materials with keeping the original walls visible to the visitors from the inside and the outside of the church.

BIBLIOLAB is a modern library project. The building is located on the 8th line of Vasilievsky Island in St. Petersburg. The goal of the project is to form a center of cultural attraction on the island. The building is an elongated cube with two facades curving inward. Combining the strict rhythm of the facade system with smooth slopes, it was possible to create a harmonious form that fits into the surrounding buildings. In "LAB" you can sit in a café, listen to a lecture or enjoy the view from the roof with a book in your hand.

So Close , So Far Cultural Center

This project is a collection for both cultural and service works. It can not be fully placed in the cultural category, but due to the situation, the best thing to do was to have a multi-purpose project. The location of this project is between two residential spaces and Laleh Park. It should be designed so as not to damage the park and at the same time provide good visibility and good spaces for relaxation.

As we all know nature is the most important source of inspiration for the new innovations, therefore it was the driving force in design. Targeting natural crises in Egypt such as water quantity and quality and desertification as well as energy resources and waste production. While exploring these natural crises it was fit to look for their solutions in nature's ecosystems and organisms, thus generating a new optimized systems for regional and architectural problems.

In search for what is a natively ‘British Mosque’, our proposal aims to strip away the typology’s middle-eastern influenced design and ornamentation, and harkens back to the spatial and formal simplicity of the earliest mosques, where a series of modest spaces were wrapped around a central courtyard. With the city of Preston as our palette, our proposal envisions a contemporary neutral design, inclusive to a diverse Muslim population with various cultural backgrounds.

Form 4 Architecture’s Intertwined Entities is a columbarium (public memorial space for funerary urns) that will occupy the grounds of the Episcopal Church of St John the Baptist in the Pacific coast town of Aptos, California. Designed as a choreographed sequence of open-air stone pavilions, it reads like a meeting of intertwining outdoor rooms. Its weight and sense of permanence will provide a contrast with the lightness and everchanging seasonality of the surrounding drought-tolerant landscape, also designed by Form4 Architecture.

The Ecological Center is to fulfill two functions: ongoing supervision over the storage and management of waste and educational awareness. The design of the social and office building involves the construction of a one-storey building with an unusual plan, with a green roof adapted to pedestrian traffic, which blends in with the surroundings. The form of the object was inspired by the adjacent hill, which is a reclaimed area of recycled rubbish.

The building is contemplated to have a 500-seat indoor concert hall, a 600-seat outdoor amphitheater, an art exhibit space, community meeting rooms and classrooms for both music and art. The genesis of the Concert Hall design is influenced by historical, cultural, environmental and vernacular concepts. Salish and Suquamish Tribal art were significant inspiration for the fluid and organic shape of the building. Crescents, trigons, ovals and other shapes that have been used in wood carving and stylized Salish art are embodied within the architecture of the building.

The project was designed with the elements and qualities of the architecture of ancient villages of China in mind. It is formed in a rectangular site in order to respond to the requested guidelines in the program. The plan is divided into four sections, as they separate, a space is formed in the middle which is designed to create a connecting space, and activate public activities. In order to improve the landscape quality we have placed a river in middle. The river is situated beside the commercial spaces and shops. These spaces are designed to be reminiscent of traditional Chinese markets as well as the floating villages and cities.

Due to the sudden COVID-19, there is no physical contact with each other due to the library's one-way traffic or open planning, but it should be understood as an open media through soul contact. This concept was developed to attract the curiosity of visitors as a metaphor for the young prince and oreum who were transformed from the uphill path of Korea.

The new civic hall of Terzo di Aquileia configures a renewed piece of the city open to citizens, a meeting place and a point of reference for the entire territory. The memory of the place persists over time and in its original location; the new urban square welcomes invites to the new building. The design of the external walls of the new building, made of exposed concrete, become the revival of an identity language that is easily recognizable by the community, mindful of the history of the place.

The Campus of the National Center for Physics and Mathematics

The key values of the project were efficiency, innovation and sustainability. A concentrated and efficient campus structure, based on a chain of interconnected common areas and green courtyards with different levels of privacy, creates a comfortable human-scale environment. This structure allows to significantly reduce the cost of laying roads and communications and optimize pedestrian flows. Everything here is within a walking distance. The transport with an emphasis on cycling both inside the campus and with neighboring settlements.

The project aims to act on an existing space: the arcaded cloister. Today it has become a multi-purpose space in which various activities are carried out; but under strong spatial, acoustic and thermal restrictions. It is the only exterior space of the building, where the axial axis ends and a strong link with the park is established. 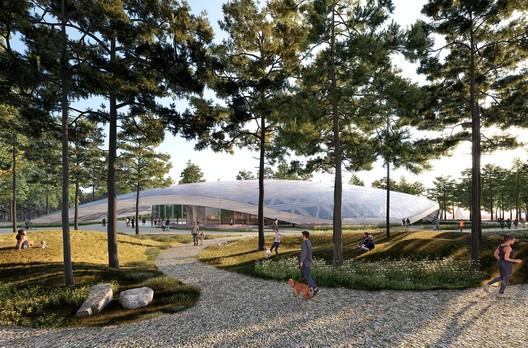