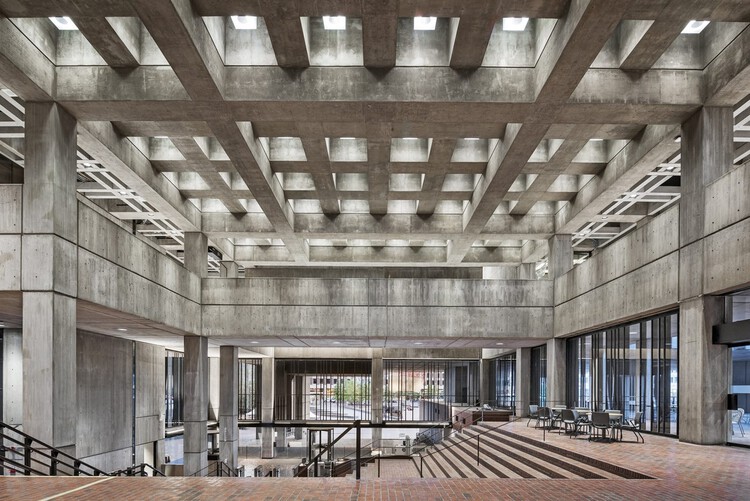 As the construction process can amount to half of a building's lifetime carbon emissions, the adaptive reuse and retrofit of existing buildings are critical strategies in reducing embodied carbon. Not only are resources conserved by recycling spaces, but the lifespan of structures whose fabrication generated large quantities of carbon dioxide is extended. The latter is especially important in the case of Brutalist architecture and its carbon-intensive concrete structures. Frequently disregarded and vulnerable to demolition, the concrete buildings of the last half of the 20th century can become fertile ground for experimentation in reuse, prompted by contemporary environmental imperatives.

Material Passports: How Embedded Data Can Rethink Architecture and Design

While the adaptive reuse of industrial sites has become widely popular, appealing to creative industries and cultural institutions, not the same can be said for Brutalist architecture. There is ambivalence over how to treat this building stock, and an illustrative example is the demolition of Robin Hood Gardens, just as Park Hill Estate was refurbished. Earlier this year, the Paul Rudolph-designed Burroughs Wellcome building in North Carolina was demolished, despite attempts to preserve the Brutalist landmark. At the time, the Paul Rudolph Heritage Foundation outlined the failure to consider the environmental impact of demolition over adaptive reuse.

The rehabilitation or the adaptive reuse of brutalist buildings are not devoid of challenges. In many cases, building codes, policies and financial frameworks discourage retrofit projects, making demolition the more common option. Moreover, the process of adaptive reuse is often more costly and labour intensive than building anew, as it requires investigations into the building's condition and selective demolition. The situation of listed Brutalist buildings is even more complicated, often caught in the middle of conflicting energy codes and conservation imperatives. The preservation community is divided when it comes to the types of acceptable interventions, inadvertently limiting the possibilities for contemporary use.

Indicative of the technical challenges of the reuse of modernist buildings is the refurbishment of Balfron Tower by Studio Egret West. The project is an example of an extensive renovation increasing the building's life cycle and creating significant whole-life carbon savings while keeping the original aesthetics. The 1960's Brutalist building underwent a thorough thermal upgrade and was brought in line with current fire regulations. With cold bridging as one of the significant shortcomings of postwar concrete buildings, slabs and walls were clad on the inside to prevent condensation but preserve the facade of the listed building. The refurbishment scheme kept much of the original design, updating interior layouts, changing the windows, and reinterpreting some architectural details.

In some instances, the adaptive reuse of post-war heritage also requires a reconciliation of the public opinion with either the aesthetics or the ideology that shaped the buildings. Some practices like Architecture Initiative see retrofit and reuse as the default design strategy not only to reduce embodied energy costs and save resources but to preserve the architectural identity of the urban fabric. The firm has transformed the brutalist Northampton's Royal Mail sorting centre into an educational facility. The derelict building's massive scale made it too expensive to demolish, leaving adaptive reuse the only viable option. The project was transformed into a school with additional community facilities, which regenerated the entire area.

REX founder Joshua Prince-Ramus commented on adaptive reuse back in 2017 saying that it "is going to slowly become the world of architecture in our lifetime and certainly in the next generation's. We simply have to see adaptive reuse as 'Capital-A' architecture." The adaptive reuse of Five Manhattan West involved redesigning its facade, which simultaneously improved the energy performance of the building and created a more appealing and contemporary architectural image.

Not only can Brutalist buildings be given a new use, but they can be retrofitted to operate with green energy. Marcel Breuer's Pirelli Tire Building in New Haven, built in 1969, is currently being transformed into a net-zero energy hotel by Becker + Becker Associates. The structure housed offices, as well as a research and development facility, and after it was vacated in 1999, it entered a state of decline. The concrete landmark will contain 165 rooms and will operate with energy produced on-site.

Considering the current environmental crisis, recycling existing buildings is imperative to reduce energy consumption and resources. However, the practice holds value not only from a sustainability point of view but also for social and urban fabric cohesion. Moreover, there is an appealing design challenge in conquering the shortcomings of the original design and extending the life of existing buildings. 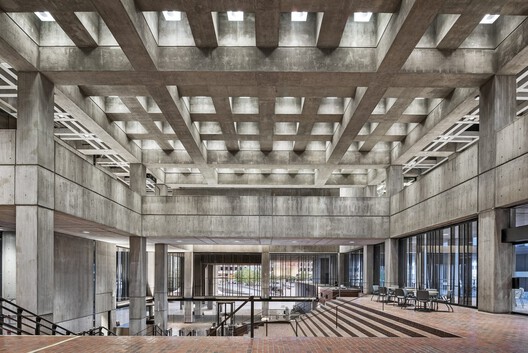