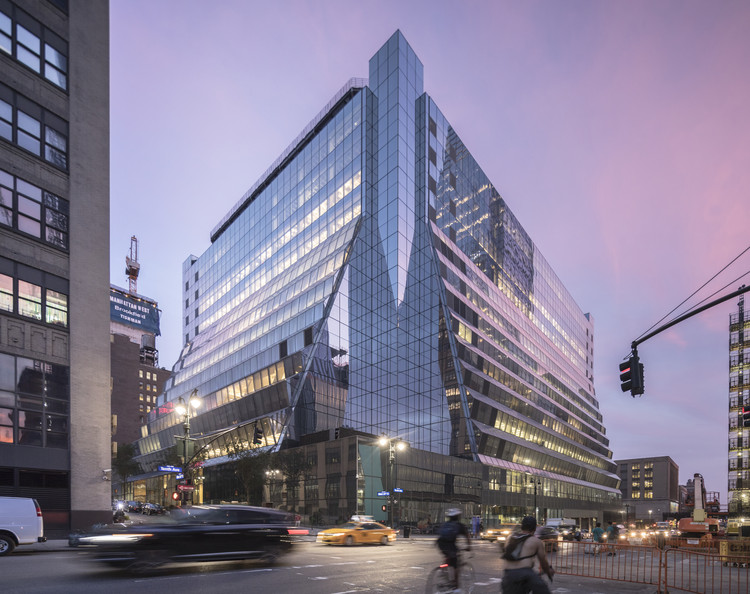 During the 1980s, the building’s hard beauty was neutered when its external structural elements were painted beige and its ll-in wall panels clad in brown- colored metal siding. Over the years since, 450W33rd has become a bizarre artifact marooned in the no-man’s land of West Chelsea, disparagingly nicknamed “the elephant’s foot” or “The Tyrell Building” after the headquarters in the dystopian lm Blade Runner. With Brook eld O ce Properties’ development of Manhattan West (500,000 m2 / 5,380,000 sf) immediately to its east, and The Related Companies’ development of Hudson Yards (1,180,000 m2 / 12,700,000 sf) immediately to its west, 450W33rd has suddenly taken on serious import within Manhattan’s evolution.

The building’s massive floor plates (ranging from 8,000 m2 to 11,500 m2 / 86,000 sf to124,000 sf) and unusually high ceilings (typically 5 m / 16.5 ft) provide a huge amount of uniquely dimensioned, free plan ‘support space’ for Manhattan West’s and Hudson Yards’ significant injection of traditional Class A offices.To advantageously reposition the building within this new context, its exterior required both an aesthetic facelift and an improvement to its energy performance. In addition, the building’s lobby, elevator cores, and building services needed to be significantly upgraded to meet the demands of its new breed of tenants.

In considering how simultaneously improving its aesthetics and performance—its geometry posed two fundamental design challenges. First, its shape was, bluntly, unflattering. Second, the majority of its perimeter walls were sloped at an angle of 20 degrees, a pivotal burden in the building’s reconceptualization. 450W33rd was erected under the 1968 Building Code of the City of New York. Replacing the façades in 2014 required meeting all building code amendments up to July 1, 2008, including the 2 m / 6.7 ft minimum height for accessible paths of travel (avoiding head strike conditions) necessitated at the building’s perimeter. This would thereby render a significant portion of the building un-leasable! Such a solution was thereby financially untenable.

The obvious response to overcome this code burden would be to create a ziggurat—or step-shaped façade— whereby each floor’s windows become vertical and all leasable area is maintained. However, this approach would create an unacceptable snow, ice, and guano hazard.

A suitable variation of this approach is to pleat the façade above head strike: views to the exterior are unimpeded, leasable area is maintained, and all hazards are avoided.  Further, this pleated geometry improves both energy performance and visual comfort as compared to that of a planar façade applied to the same underlying sloped building geometry. The over-slung panes of glass are partially opacified, reducing direct solar gain from high angle sun. The under-slung panes in turn receive much lower solar heat gain, since they present an oblique angle to the sun and are ‘self-shaded’ from the over-slung panes. Cooling loads and glare are reduced with the decrease in direct sun.

While the pleating of the façade results in an increase of overall glass surface, the insulation value of the new glazing assembly is significantly higher than that of the original glass, resulting in no net loss of insulation value or energy performance. Meanwhile, the increased area of glazing allows for deeper penetration of daylight into the interior.  To create an exciting geometry that harmonizes the pleated window areas with the vertical regions at the building’s top, the severity of the pleats gradually reduce the higher they go.

To minimize the façade’s cost, the under- slung panes of the pleated façade never exceed 15 degrees from vertical, which allows the system to utilize a monolithic IGU solution, as opposed to the safety laminated glazing required for skylights (de ned as glazing angled 15 degrees or more from vertical).

The resulting shape is one that suggests either a shimmering cascade... or a beckoning lighthouse Fresnel lens that reflects the sky. From the user’s experience, the Fresnel geometry allows for remarkable transparency that opens up the massive floor plates, renders the building highly transparent from street level, and breaks down its overall mass.

The façade’s unique geometry demands a strategic design for the window washing system. The employed solution features a conventional track, torpedo, and gondola system adapted to move freely over the undulating curves of the façade, to transition easily from vertical to pleated façade, and to glide across stack joint conditions without jamming or inflicting damage. The mullions—designed to incorporate the curved track of the window washing system as a separate extrusion—maintain allowances for thermal expansion and fabrication/installation tolerances commonly associated with unitized curtain walls.

The system was verified and perfected through full-scale testing of the track, torpedo, and gondola. To integrate the repositioned building into the larger plans of Manhattan West and the final sections of the much-heralded High Line, a two-story arcade breezeway is excavated into the southern side of the building.

Coincident with the height of both the High Line and Manhattan West’s central plaza to accommodate potential future links, the breezeway is connected back to grade at the building’s southwestern corner to allow pedestrians to bypass the inactive sidewalk from 10th Avenue to Penn Station.

To complement the creme color tones of travertine walls and neutral grey terrazzo oor, the benches are comprised of CNC-formed black walnut.

Conceived as a venue for the display of Arts Brook eld’s collection, the lobby provides space for contemplative experiences including customized benches. 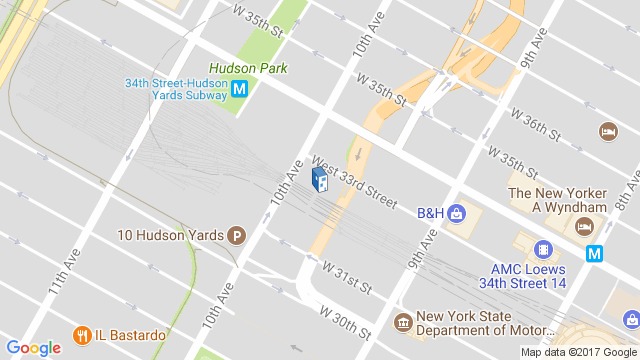 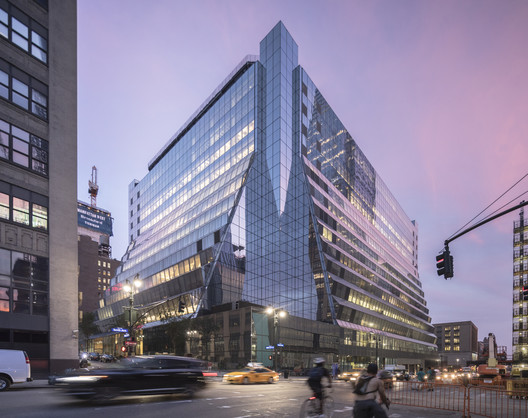