Last year’s granting of the Mies van der Rohe Award to a social housing refurbishment project brought into the spotlight a topic of interest for many European cities: the moral and physical rehabilitation of post-war housing blocks.

The EU Mies Award 2019 was assigned to the restoration of three social housing blocks in Bordeaux, by Lacaton & Vassal Architectes, Frédéric Druot, and Christophe Hutin Architecture. It is worth mentioning that this was the second time in a row when the award went to a collective housing renovation project. In 2017, the prize was awarded to NL Architects, and XVW Architectuur for their Kleiburg revamp scheme. This goes to show an increasing interest in rehabilitating the post-war housing stock, but a consensus on the topic among professionals and decision-makers hasn’t been reached yet.

In the 60s and 70s, numerous large scale collective housing estates were built throughout European cities, to rapidly solve the stringent need for housing after the war. These housing developments proved to have different flaws and have amassed significant criticism in recent years, being threatened with demolition all across Europe (see ArchDaily’s coverage of the demise of Robin Hood Gardens).

There is something appealing about rising to the challenge of building upon the architectural concepts and thoughts of the past. The rehabilitation of these estates means more than giving facades a new fresh look, as it involves renewing typologies, improving living conditions and the urban environment. In the light of architecture's recent and promising shift towards re-use, it is worth examining different aspects of refurbishing existing housing blocks, improving the user's experience, conquering the shortcomings of the original design and extending the life of these buildings.

One recurrent aspect of this type of intervention is the extension of the living area, most often in the form of outdoor private space. It provides for the opportunity to engage in new, different activities, much like the ones an individual house might enable.

(Bordeaux, France) The transformation of Cité du Grand Parc focused on creating a semi-outdoor space for every apartment by adding 3.8 meter-deep prefabricated modules to the façade. For one, the structure increases the living space, and by being intentionally left un-programmed by the architects, it allows for a multitude of activities defined by the tenants. Secondly, as one deficiency of these estates is the precarious insulation, the entire device adjacent to the façade becomes the spatial equivalent of the usual thermal insulation layer. The prefabrication kept costs low, and the tenants were able to continue inhabiting their apartments during the construction work.

(Paris, France) The same team of architects previously experimented with this refurbishment method at Tour Bois-le-Prêtre. By adding balconies, winter gardens and extending living space at the tower’s extremities, the surface area is increased significantly, satisfying new rental needs. As Anne Lacaton stated, the aim was transforming the building into a tower composed of urban villas.

The opportunity to intervene on the apartments’ layouts is quite rare, as it requires a significant effort in relocating dwellers. Nonetheless, when this is possible, a vast range of opportunities emerges.

(Rimavka Sobota, Slovakia) This project is an example of such a holistic intervention on prefab housing. It might not be a large housing estate, but it serves the purpose of this article to take a closer look at the design strategies employed here. Not only was the façade remodelled, but the interior layout was changed, creating a greater variety of housing options. In addition, the ground level was redesigned to contain communal spaces and public amenities.

(Norfolk, Great Britain) The refurbishment of the 1960s slab blocks comprising of 320 properties involved demolishing the elevated walkways, internal re-planning to allow for front doors at street level as well as better bathroom and kitchen layouts. The facades were upgraded, and improvements were made within the public domain of the estate.

One of the biggest failures of these estates is their mono-functional nature, leaving no room for any community life to flourish. The refurbishments of large housing estates are only sustainable if the developments are infused with new life and diverse activities, encouraging social interactions.

(Amsterdam, Netherlands) The refurbishment of one of Netherlands’ largest apartment buildings focuses on renovating the main structure and common areas, leaving the apartments to be finished by the users. The shell could be bought for a very low price, and an adjacent apartment could be added to create a new dwelling typology. The ground level, initially dedicated to storage spaces, is repurposed, opening it up to more interactive functions, such as workspaces and daycare facilities, what the architects call “a social base embedded in the park”.

(Lormont, France) In order to foster community building, thus nurturing a sense of care for the estate among residents, the architects of the Lormont rehabilitation project concentrate their efforts into redesigning the space within this city block, creating a better equipped communal space in the form of an urban park.

(Sheffield, Great Britain) The brutalist icon of Sheffield was saved from demolition through an extensive refurbishment project that involved creating a functional mix of housing, offices and small businesses. One of the shortcomings of the estate being its impermeability and lack of public spaces that would generate activities, the intervention replaces ground level apartments with local shops, bars and restaurants, creating an urban atmosphere. The Sheffield project was shortlisted for the 2013 Stirling Prize. 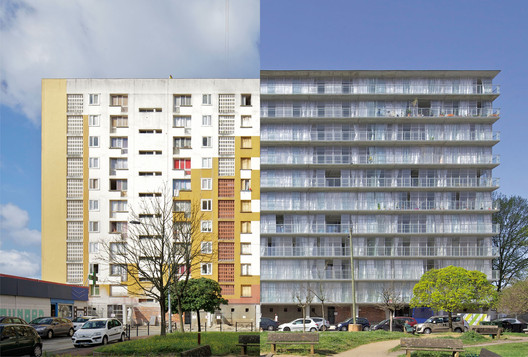