Save
The Spatial Stories of Ousmane Sembène
Share
Or
Copy 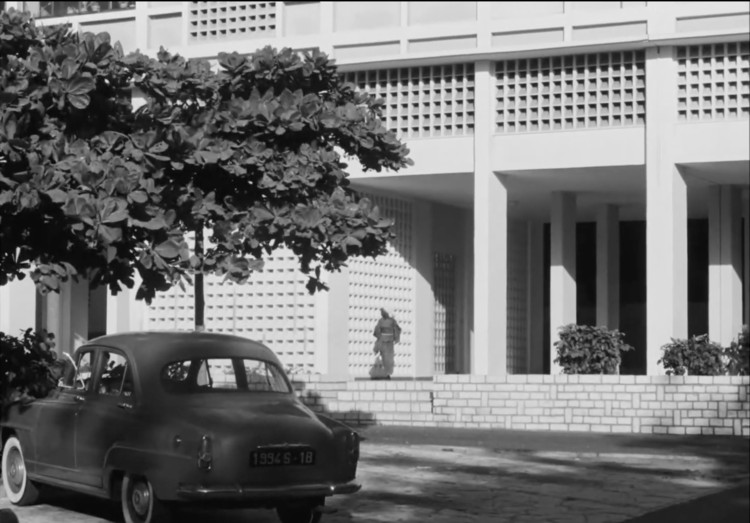 ‘La Noire De…’ is a poignant, touching film that centres its gaze on a Senegalese woman, a nursery maid who works for her white employers in France. She previously used to work for them in Senegal – primarily as a carer for the children, but she finds herself working as a housemaid in France, cooking, cleaning, and treated with general contempt by her employer. She is alienated, living a lonely life in France confined to a high-rise apartment.

The film displays in stark clarity the urban quality of a post-colonial African city. The area in which the titular character Diouana – played by Mbissine Thérèse Diop – lives, is Medina, a “native quarter” established in a decree by French colonialists in 1914 as a “Cordon Sanitaire.” This decree legalised the relocation of Dakar’s native residents to the peripheries of the city. This area is shown in Sembène’s film as an informal collection of housing made up of wood and corrugated-iron roofs, the dusty roads a marker to the viewer that this is, at the very least, a segment of the city deliberately left forgotten by the colonial government.

When Diouana leaves Medina to look for work in Dakar’s city centre – the segregated nature of the city is laid bare. Diouana in almost symbolic fashion must climb a footbridge in order to access the city centre, closed off implicitly from the ‘native centre’ by conveniently placed railway tracks. The views that we get of the city centre are of impressive high-rise apartments with breeze blocks and brise-soleil, representative of the tropical modernist style so common in Africa in the 1950s and 60s. Whilst structures like this are mostly heralded as an admirable symbol of an independent Senegal, we see through Diouana’s eyes how these infrastructural elements exist in the context of an unequal society – the quiet, wide-laned streets of the city centre a world away when compared to the Medina district.

When Diouana moves to France at the behest of her employer, we are again privy to another type of spatial experience, that of the exploited migrant. Diouana is confined to her apartment, which means she cannot enjoy the beauty of the French Rivera where the apartment is located. She is, instead, limited to “the kitchen, the bathroom, the bedroom, and the lounge.” A prisoner, in effect, unable to enjoy the urban character of Marseille. It is a disturbing scenario that is still reflected in today’s society, with many migrant domestic workers today forced to make do with constrictive, suffocating spaces.

Mandabi, on the other hand, is a film more light-hearted in tone, but equally as scathing in its critique of colonialism. It follows the futile attempts of a man called Ibrahim, the protagonist, as he struggles to cash a money order he received from his relative in France. He is an unemployed husband of two wives and lives in what looks like the poorest district in Dakar. Ibrahim’s living situation is displayed as far from ideal, but the viewer is also left to admire the intricate, communal nature of this Senegalese district.

Neighbours frequently spill over into each other’s compounds, and there is a certain informality, with frequent chance meetings between characters of the film as they leave their homes. It is a far cry from the neighbourhood where Diouana finds work in ‘La Noire De…’ Although that neighbourhood is better planned and less chaotic, it also seems more lonely, a sort of gated community that is the antithesis of what Sembène views as a traditional, community-focused way of Senegalese living.

Not limiting its focus to Ibrahim’s neighbourhood, Mandabi also offers a dizzying, confusing view of the modernity of Dakar. High-rise buildings and neatly paved streets set the scene for Ibrahim’s search to obtain an identity card, and later a birth certificate in order to process the money order. This bureaucratic charade takes place within a French-inspired administrative system, existing inside the grand city hall and bank, and a Modernist Post Office. Outside these buildings and in the city centre, however, there is still an informality present. A small photographic studio, for example, draws a large influx of people, an interesting case that mirrors how the post-colonial cities around the world are made up of various layers, often existing with a direct source of tension between the ‘traditional’ and the ‘modern.’

La Noire De… and Mandabi might be only two films amongst Sembène’s body of work, but they are two films that tell a lot of the complexities of ‘modernisation’ after colonialism. The films are also a reminder that our spatial environment – which exists as a backdrop in our everyday lives, is a lot more at the forefront than we might think.

All images are screenshots from the movies La Noire De… and Mandabi, courtesy of Janus Films.