Save
An Underground House in Ukraine and an Extension for the Glasgow School of Art: 12 Unbuilt Projects Submitted by our Readers
Share
Or
Copy

Going out twice per month, our curated selection of Best Unbuilt Architecture submitted by our readers highlights inventive conceptual approaches and designs. Showcasing projects from all over the world, this article puts together several programs, from houses to master plans. Moreover, it presents winning proposals from international competitions, buildings in progress, and creative concepts.

In the housing category, the roundup features an underground bunker-like house plan in Ukraine, a suspended glass structure cabin in Portugal, a complex of residential units in France, and a site-less, style-inclusive reinterpretation of the vertical housing block. In addition, a playful commercial building in Iran, a WWI memorial in Serbia, and an extension for the Glasgow School of Art join the selection, with their imaginative architecture and out of the box ideas.

Read on to discover 12 selected projects submitted and their descriptions from the architects.

From the outside, Plan B resembles the entrance to a museum of modern art, or even to a military base. We tried to create a simple and concise form, which in all its perspective would speak of reliability, but also be aesthetically attractive, it would not intimidate and lets you in from both the ground and from the air. The massive concrete structure is equipped with three entrances and a helipad on the roof. It occupies only 172 square meters and can be placed either near the main house or, in our case, somewhere in the woods.

Current HOME is a site-less, style-inclusive vertical housing block, where domestic living straddles apartment-style living and the detached single-family home associated with iconic American dwelling. Current HOME reinterprets traditional components of a single-family detached home and applies them on the scale of the multi-family apartment building.

The Puff-Fuse Project is TAO Office's proposal for a design competition for the Helal Iranian Company's commercial building facade design, in this project we decided to distance ourselves from the stereotypes in contemporary Iranian architecture that sees a building as only a facade, and it means that our project was not judged, so we did not participate in the competition, but we published it to clarify our criticism of the idea.

This project for the Glasgow School of Art proposes the creation of new educational studios, public spaces and gardens, forming a block-wide strategy in response to the series of fires that have destroyed Mackintosh’s national icon. The design is inspired by the megalithic architecture of the city, historical Scottish castles and makes further references to the original building.

With innovation as a central design ethos, the Arup design references the local cultural icon of lotus and the stepped rice terraces, enabling this new Hoa Lac National Innovation Centre (NIC) to become a first-of-its-kind landmark in Vietnam. Arup has been engaged by the Ministry of Planning and Investment (MPI) to provide the architectural consultancy and concept design, structural engineering, urban design, etc. services for the NIC, to create a world-class technology startup ecosystem in Vietnam and contribute to the implementation of the national strategy on Industry 4.0.

The project develops around a central opening that creates a private courtyard with full southern exposure. On either side of it, cascading terraces create a landscape of suspended gardens that echo the plateau in the background. A subtle dialogue between massive stone and wood framework is implemented through traditional processes, updated through recent advances in wood construction. Thus, this new project will boast key-values such as energy responsibility and the search for more pertinent building systems, to offer inhabitants an enhanced architectural quality.

The Porter Square Station project reimagines one of Boston’s transit stations by inserting a bold red structure that connects 3 levels of transportation. At street level, the design acts as a sculptural billboard and provides tiered seating creating a place for people to congregate and hold public events. The red structure can be seen from a distance down the major avenues radiating from the site and sets up the station as a major focal point in the square.

LuzAzul composes of spaces that aim to stimulate the senses of its residents. These spaces are the companions of the everyday life of its user, configured by the architecture and tectonics that are woven and integrated into the project - a complex of 19 luxury residences in Tulum’s jungle. The project expresses as a brutalist monolithic volume that works as a frontier. It also functions as a veiled entrance to the residential compound, through which the user crosses into a pathway of light, shadows, and scales alongside concrete volumes that offer shelter from the sun.

Serbian heroes in the First World War deserve an authentic memorial complex through the evocative scenography of the spatial cultural symbol of victory. Therefore, at that moment of reconsideration, above the crowns of Cer and Grab forest rests a monument to the Victory of Serbia in the First World War, as a picture frozen in time between then, now and forever.

Focused on advancing technology for the human good, Virginia Tech’s Innovation Campus will help transform the Washington D.C. metro area into a tech talent hub. The design of the first academic building on campus highlights the University’s commitment to sustainability and resilience. Computational design techniques generated models that flexed the building shell, exploring different configurations of faceting to optimize photovoltaics. The resulting design is sculpted to capture the sun’s light and energy, welcome the local community, and attract future students.

Editor's Note: This article was originally published on July 15, 2020. 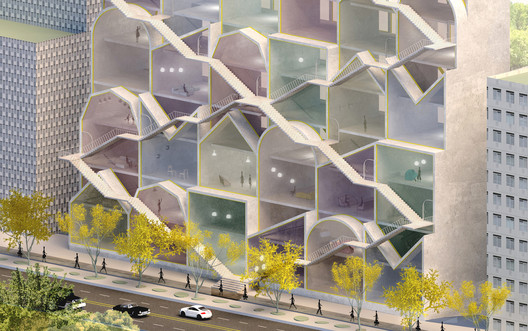