Incredibly prolific and influential among his contemporaries, Arata Isozaki became the eighth Japanese architect to receive the Pritzker Prize, the most important award in the field of architecture.

Building of the Year 2019: Richness of Firms, Regions, and Materials

Every year, ArchDaily offers our readers the chance to choose the best architecture from all around the world. In this edition, Pritzker Prize-winner Paulo Mendes da Rocha shares the recognition with global firms such as MVRDV and emerging offices from India and Vietnam.

Our readers also chose the best architecture 'in Spanish', highlighting three projects from Peru, Chile, and Ecuador —a balance between the richness of South American architecture and the potential of our discipline to have a massive, public impact for the most.

ArchDaily Brazil's ODA 2019: A Public Building, A Museum, and A House

For its part, ArchDaily Brazil readers decided to recognize a house designed for a young couple who dreamed of being close to nature; a reconverted warehouse in Recife, and the most anticipated public project in Sao Paulo downtown.

ArchDaily China's Building of the Year

This year ArchDaily China readers selected projects in Changsha, Hangzhou and Qingdao, designed by WCY Regional Studio, LYCS Architecture and DC Alliance + Snøhetta, as the best projects of the year in China.

ArchDaily's 2019 Refurbishment in Architecture Awards: Voices from the States, Italy and China

In its second edition, our readers selected buildings that —due to their beauty, intelligence, creativity, or service to the community— represent the best in refurbishment architecture of this year.

A new user-fueled award emerged this year as the result of the combined interest of ArchDaily, Strelka Institute, and Strelka KB to celebrate emerging architects and new ideas that transform the contemporary city.

Chicago Architecture Biennial 2019 "...and other such stories"

Led by Artistic Director Yesomi Umolu and co-curators Sepake Angiama and Paulo Tavares, the third edition of the Chicago Architecture Biennial l showcases the work of over 80 contributors, proposing an investigation of the built environment, not just of its form, but also of the conditions that shape it.

Led by Carlo Ratti, Meng Jianmin and Fabio Cavallucci, the eighth edition of the most interesting architecture Biennial in Asia explored the main issues behind the digital revolution in urbanism and the potential impact of new technologies such as machine learning, artificial intelligence, and automation.

Led by Éric Lapierre, the fifth edition of one of the most relevant lusophonic events around the world defined “The Poetics of Reason” —the theme for the 5th edition of the Lisbon Architecture Triennale— stating that "architecture does rest on reason, and its aim is to shed light onto the specificity of this reason."

Titled Todo Dia (Everyday), the Brazilian Biennial curators drew a hypothetical scenario where a powerlessness discipline might be supplanted by new technologies of automation, and explored how the most trivial level of reality "can contribute to the manufacture of architecture and urbanism".

The Chilean Biennial focused on the "common, ordinary, and collective" architecture produced in the country, beyond the worldwide-awarded contemporary architecture. Despite its abrupt ending, because of the social crisis faced by Chile, the theme of the Biennial is more relevant than ever.

XI BIAU: The Most Relevant Architecture Across Ibero-America

Curated by Arturo Franco and Ana Román, the Iberoamerican Biennial of Architecture and Urbanism was held for the very first time in Asuncion, Paraguay, awarding veterans of the field and emerging architects across the region. In an unprecedented strategy, the organization designed and built 13 public interventions —alongside local and guest architects— in La Chacarita, one of the oldest and poorest neighborhoods of Asuncion.

Warming up the path to the next edition, curator Hashim Sarkis introduced the theme of the Venice Biennale 2020: How will we live together? “We need a new spatial contract. In the context of widening political divides and growing economic inequalities, we call on architects to imagine spaces in which we can generously live together," asserts Sarkis. 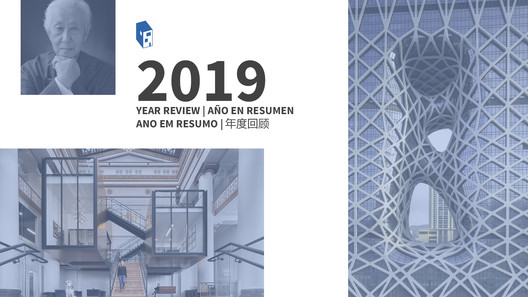