Save
What Can Design do in Chile's Social Crisis? Nothing.
Share
Or
Copy

This article was originally published in ArchDaily en Español last October 30, twelve days after the social crisis in Chile escalated. Some ideas of the analysis may feel outdated since some structural reforms were recently announced, but the author decided to keep the original spirit of the piece.

A 4 cent fair increase for the Metro in Santiago sparked mass fare-dodging protests in Chile starting on October 6. Alongside spontaneous street demonstrations, the protests spilled into widespread violence across Santiago during the following days until October 18. That day, the Metro network collapsed, the riots multiplied across the city, and looting and fires were out of control. That night, President Sebastian Piñera declared a state of emergency. 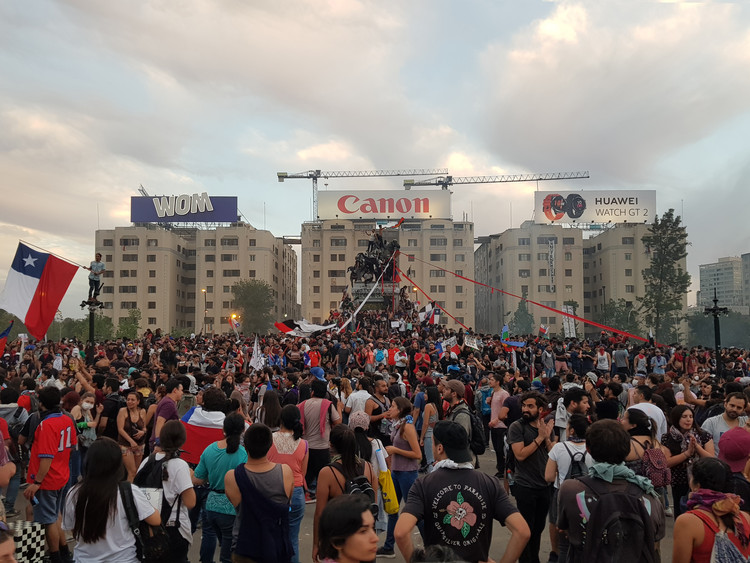 This social discontent took the streets of Santiago by surprise, but it was quickly realized that the fair increase was simply the last straw that broke the camel's back. The unrest finds itself in a society that has been holding back anger, felt rampant injustice, and suffered shocking inequity, with a growing economy whose wealth is nonetheless extremely poorly distributed. Last October 25, 1.2 million people gathered around Plaza Italia square, Santiago's symbolic center, to demonstrate the strength of the subversive social movement.

Unlike the 2006 and 2011 student protests, the current demands point to structural changes in the Chilean economic and social system. As expected, due either to genuine intrigue or simple archicentrism, we, the architects, wonder what the contribution of design could be during a social outbreak.

Let me explain myself: we have seen spatial, ephemeral interventions that responded more to a legitimate need to document and denounce (such as #PorUnHabitarDigno) than provided actions that offered answers to social demands. Now is not a suitable moment to discuss which typologies or architectural projects can settle a social outbreak because the potential solutions go hand in hand with the citizenship, the streets, the politics, the government, and the market.

In that sense, architectural design does not contribute at all in this precise moment, but we have some good news: we, architects are, first at all, citizens. We can denounce, demonstrate, demand, discuss, promote, and vote. Our value as people remains there.

Has architectural design contributed to economic inequity? Urban segregation has been actively documented and warned against by architects, urban planners, and geographers. Not only have public institutions such as IEUT (Universidad Católica), el CIT (Universidad Adolfo Ibáñez), Fundación Vivienda, and INVI (Universidad de Chile) adopted this project, but also Big Data-focused research articles such those of Dannemann, Sotomayor-Gómez, and Samaniego, as well as clear warnings like the ones stated by Chilean sociologist Maria Emilia Tijoux on ArchDaily en Español. It is worth noting that a socioeconomic spatial mapping of Santiago, developed by Fundacion Vivienda, served as a protest sign in the historical 1.2-million-person protest on October 25.

Land prices have been reproducing existing economic inequity in Santiago, and the current distribution of public and private equipment and services has been further enlarging it. These issues can be attributed to public policy strategies, tools, instruments, and, consequently, market behavior, but the architectural design of a built project is not relevant in this equation. Let me put it this way: if every architect decided to reject any design commissions, would segregation, or at least, market demand, disappear? The dreamer idea of a monolithic, unified, and aligned labor union that systematically rejects inequity-fueled commissions is wishful thinking. It is a point of view totally disconnected from what really happens in neoliberal societies — especially in a profession as precarious as architecture.

The answer is certainly not there.

Last September, a real state development announcing 18-square-meter apartments (194 ft2) in Santiago — well known as nanodepartamentos (nano apartments)— aggravated the boredom of the middle class, while the Chilean Construction Chamber (CChC, for its initials in Spanish) stated in a recent relase that "to buy a house in Chile is 'severely unreachable'". A few months earlier, the same organization warned that the housing crisis could become a social crisis. However, the problem with nanodepartamentos is bigger than a design matter: opting for a housing mortgage for those 18 square meters requires at least a monthly income of $1,150. According to NGO Fundacion Sol, only 11,9% of workers in Chile could afford these prices. Could anyone still believe that architecture could revert this scenario exclusively through "better designing"?

The structural reforms that Chile need right now are not directly linked to architectural design, but to new and better urban planning and governance strategies. These structural reforms will reverberate in the way Chile will continue to be designed, built, and awarded over the next few decades, but our foundational skills earned in undergraduate programs are not enough to intervene during the first weeks of the social crisis - in the trenches.

We should understand that design itself — the process of designing and building a project — is not enough to settle a social crisis. It oversells what architecture can achieve by designing objects. It perpetuates the unrealistic idea of a discipline that can solve all the problems our society carries. Being an architect implies methodological thinking and the ownership of a unique set of skills - skills that we are wasting because we still believe that designing and building is our only possible answer.

Let this social crisis make us more conscious of this.