The second round of voting has decided three winners of the ArchDaily & Strelka Award. The grand prize winner will be announced on September 10.

The joint award is organized by ​ArchDaily, Strelka KB, and Strelka Institute for Media, Architecture and Design to celebrate emerging architects and new ideas that transform the contemporary city.

The winners have been selected by readers of ArchDaily and Strelka Mag from a shortlist of 15 architectural projects which were decided in the first round of voting.

The grand prize winner will be announced by ArchDaily Editor-in-Chief David Basulto at the Future Architect conference at Strelka Institute on September 10.

The winning projects are:

The Creative Industries Center is located in the historical part of Chisinau in the courtyard of the Art Academy (AMTAP). The newly-built center is set to become a major hub for creative industries in Moldova. The project paid special attention to the preservation of its historical context and has transformed the academy’s courtyard into an accessible and vibrant public space.

Overseeing fields and pine trees on the outskirts of Tbilisi, the project houses a coffee production plant, its offices, a coffee tasting space, and small coffee exhibits. With a monolithic concrete facade facing the highway, most of the light enters the building through green atriums and ceiling windows. The plant features a green roof that allows the structure to blend in with the surrounding landscape.

Located opposite the Garage Museum of Contemporary Art, which was designed by Rem Koolhaas, Garage Screen summer cinema offers a new way of experiencing cinema. 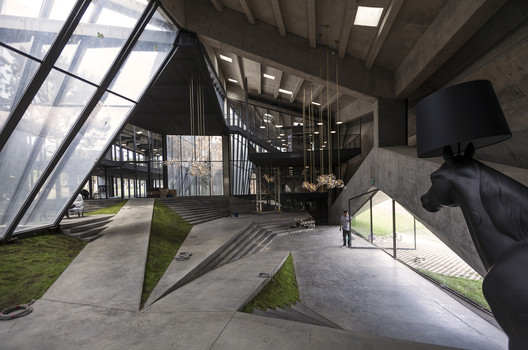