OMA, led by the firm’s partner Jason Long, has designed two towers at Greenpoint Landing in Brooklyn, New York. The towers, in conjunction with a lower seven-story building, will offer 745 housing units (30% of which are affordable) and over an acre of new public space for the neighborhood. As OMA New York’s first ground-up building in Brooklyn, the scheme will serve as “a catalyst in the transformation of the waterfront from a post-industrial edge to an accessible and dynamic part of the neighborhood.

The two towers, extending Eagle Street and Dupont Street, expand the existing waterfront esplanade, incorporating 2.5 acres of public open space along the shoreline, and 8,600 square feet of ground-floor retail. Manifesting as two dancers, the towers simultaneously lean into and away from each other. While the taller tower widens towards the east as it rises, its partner steps back from the waterfront to create a series of large terraces. 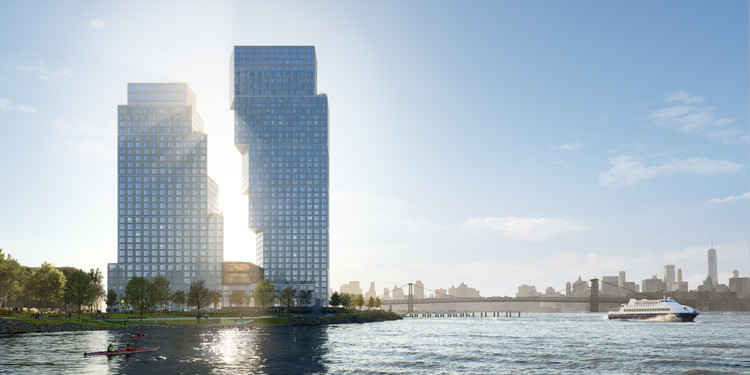 The towers are framed by two lower volumes on opposite corners of the site, creating a continuous built edge around the block. Along the edge, subtle folds and shifts define entries and reflect the often-varying street edge conditions in the surrounding area. The towers’ facades feature precast concrete panels surrounding large windows, with the precast panels carved be a series of angled planes. Orientated differently for each block (vertical, horizontal, or diagonal), the carved faces are sculpted to react dynamically to the movement of the sun throughout the day.

Brookfield and Park Tower Group have been working together to connect Greenpoint with its waterfront, and we are thrilled to be collaborating with them on our first project in Brooklyn. We have designed two towers—a ziggurat and its inverse—carefully calibrated to one another. Defined by the space between them, they frame a new view of Greenpoint and new vista from the neighborhood to Manhattan.
-Jason Long, Partner, OMA

News of the scheme comes days after OMA collaborated with Inside Outside in the design of a field of engraved columns in Dubai. Recently, the firm released a construction update for their performing arts center in Taipei, and celebrated the topping out of its stacked RAI Nhow Hotel in Amsterdam. The firm's founder Rem Koolhaas was also recently featured on the album for electronica band Tempers. 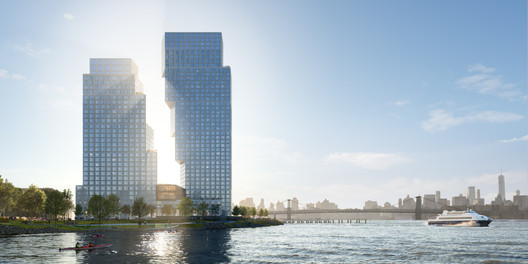