OMA and Inside Outside have collaborated on the design of a vast monument in Dubai, titled “Ethar – Honoring Generosity.” The installation consists of a field of 1,680 triangular-shaped recycled aluminum columns arrayed like a magnetic field, engraved with stories from Arabic scholars, scientists, and thinkers.

The installation was designed to celebrate the “unique culture of charitable giving in the United Arab Emirates with a physical installation that is part of the urban landscape of Dubai.” Designed for a site on Jumeirah Beach, the monument’s character can also be adapted for various contexts, whether dispersed throughout the city or appearing in key urban locations as a symbol of Emirati culture. 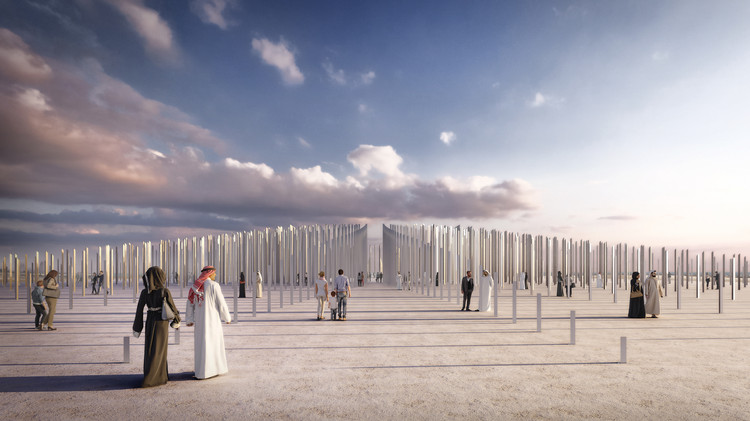 The 1,680 columns are arrayed like a magnetic field, pointing towards a rectangular plaza at the heart of the installation. As visitors explore the scheme, they first encounter a field of small pillars at the site’s boundary, transforming into a street as the columns grow taller, before ultimately opening up in the public square in the center. A pleasant micro-climate is created by the density of the columns, further enhanced by shading devices that transform the monument into a playful social space.

At night, an illuminated spectacle sees lights gradually shifting from wide to sharp, and cold to warm, while rows of stainless steel lighting fixtures define the plaza, and enhance the gesture of movement in the design.

The project is financed through funds raised by the sponsoring of individual columns and will be used to support charities with a focus on education in the UAE. The scheme was initiated by the YBK Group, Mr. Yasser Bin Khediya, and will be carried out by the Dubai based Ethar Foundation.

News of the scheme comes shortly after OMA released a construction update for their performing arts center in Taipei. The firm also recently celebrated the topping out of its stacked RAI Nhow Hotel in Amsterdam. The firm's founder Rem Koolhaas was also recently featured on the album for electronica band Tempers. 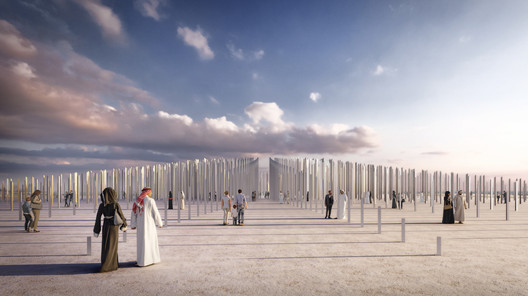