New photographs have been released of OMA’s Taipei Performing Arts Center (TPAC), as construction continues in Taiwan. Consisting of three theaters, each functioning autonomously of each other, the OMA scheme seeks to depart from the traditional consensus of performing arts centers as simply containing a large auditorium, medium-sized theater, and small-size black box.

OMA sees “no excuse for contemporary stagnation,” using the TPAC as an opportunity to experiment with the inner workings of theaters, leading to a dynamic external presence. Hence, the TPAC’s three theaters plug into a central cube combining stages, backstages, and support spaces into a single, efficient entity, allowing stages to be modified or merged for unforeseen scenarios. 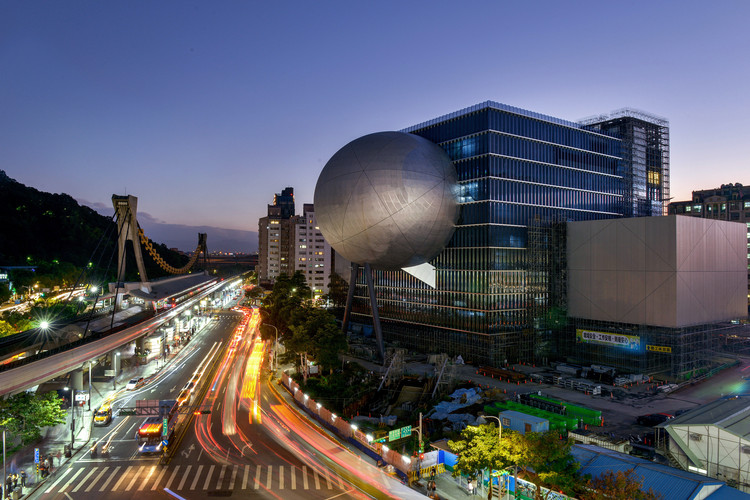 The TPAC also departs from the conventional “front of house/back of house” program of theaters and performing arts centers. The compact form allows for several “faces” defined by the individual theater protruding from the central cube. The auditoria are imagined as “mysterious, dark elements against the illuminated, animated cube” of corrugated glass.

The TPAC’s boldest feature, the “Proscenium Playhouse,” evokes the image of a suspended planet docking with the cube. Internally, the audience circulates between two shell layers to access the auditorium, while the intersection of the inner shell and the central cube forms a unique proscenium (the part of the stage in front of the curtain).

The Grand Theater is a “contemporary evolution of the large theater spaces of the 20th century,” accentuated by a slightly asymmetrical form, and a stage, parterre, and balcony all unified into a folded plane. Opposite the Grand Theater, a Multiform Theater offers flexible space for experimental performances.

The TPAC has been designed to encourage interaction with the public, even those without a ticket, with a “Public Loop” through the theater infrastructure and production spaces. As well as enabling the audience to experience the workings of the arts more fully, it encourages the theater to open up to the wider public. 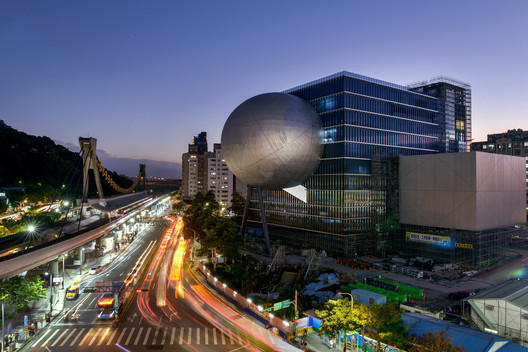