OMA's Taipei Performing Arts Center (TPAC) has topped out in a ceremony including Taipei’s mayor Hau Lung-pin, and OMA's Partners in charge of the project, Rem Koolhaas and David Gianotten. Even in its current skeletal state, the rigidly geometric form is clearly expressed with it's central cube supporting three protruding auditoriums, two cubic and one spherical. The design of the TPAC is in many ways experimental, incorporating a looped public path which shows off the building's backstage areas, and flexible auditoriums which can even be combined, offering extraordinary stage spaces that allow performances which would be impossible in any other theater.

Ahead of the topping out ceremony we spoke to partner in charge David Gianotten, who explained the building's design concepts and the challenges (or rather, surprising lack of challenges) in the construction, and told us "you will only understand it when you have seen it. It's super exciting, we encourage everybody that loves architecture to come and see it because it's spectacular."

Read on after the break for the full interview 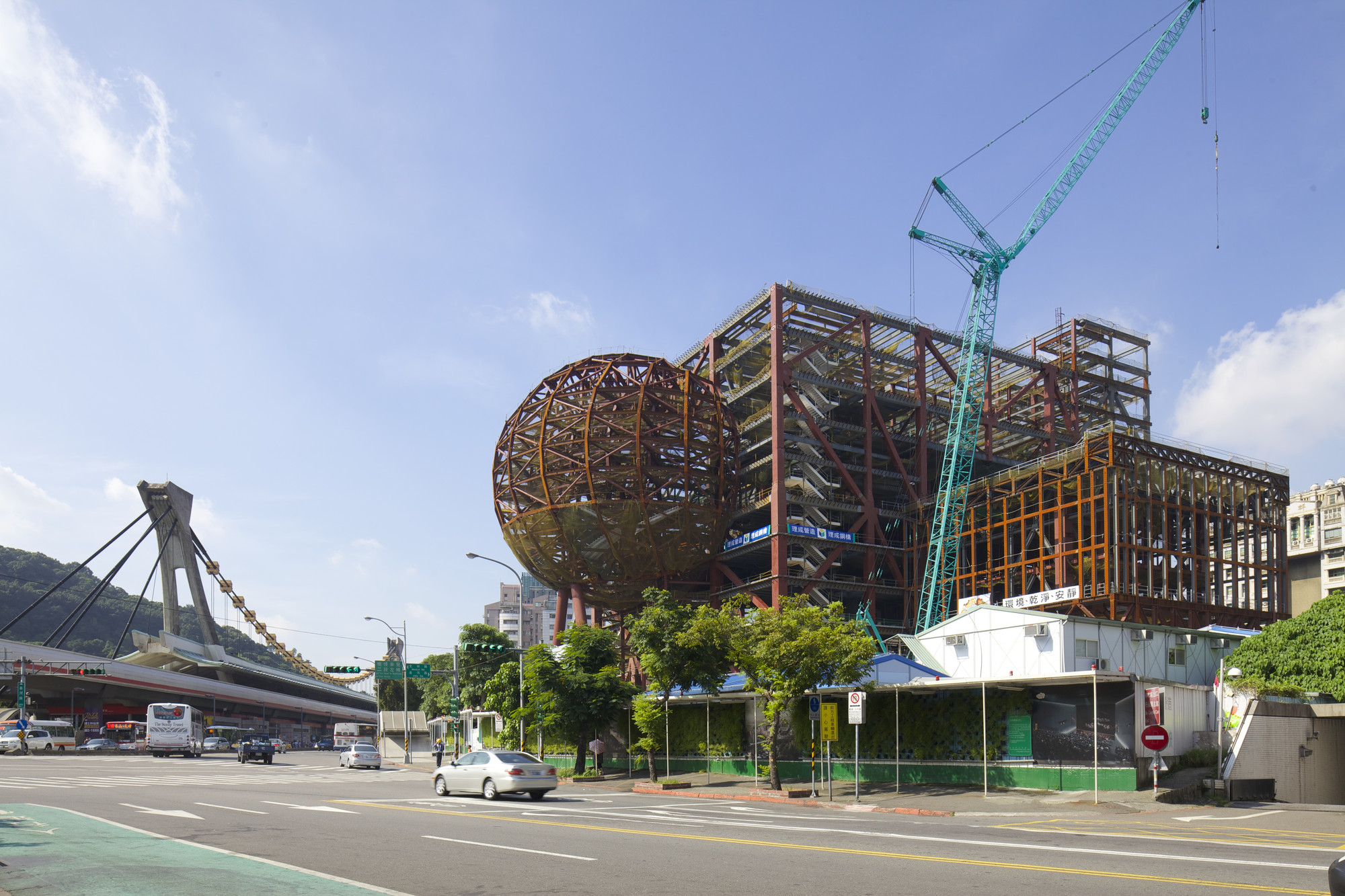 ArchDaily: The project, based in basic geometric volumes that are now very clear at the topping out, came around the time of OMA's Prada Transformer (a twist of pure geometric volumes). We're interested to find out how & why OMA is pursuing complexity and flexibility within the constraints of rigidly geometric forms.

David Gianotten: I think what we tried to achieve is to create a diagram for theater-making that would act as a machine for the people to work with. If you look at the building today, you constantly are reminded of the bigger picture of the building: of the cube with the hanging volumes, and the volumes that can be combined to form one bigger element. So the building is very readable as a pure geometrical diagram. At the same time, when you look at what we did to reinforce the diagram, it becomes a very layered building: a very public part with a very private part, too. And we try to blur it. So the clarity is intentional. It's a cube with three volumes. And at the same time, this gives us so much opportunity to play with where the public goes, to blur the boundaries and that was the real result of the competition--which we obviously didn't know if we were going to win because it was an open competition with so many participants.

When we were able to be finalists and, in the end, win, we kept that purity. If you're looking at the site today, it's so readable and it's so understandable. We don't need to explain the building, everyone understands it, when they are in it or as they approach it. And at the same time, it's such a strange appearance in the city. It's very geometric, but at the same time it's very uncommon. It's quite large when compared to what is around it. It's a very interesting, basic shape that you read as a diagram that sometimes becomes the building, and suddenly becomes the diagram again.

AD: How important is the public loop - and the unplanned 'theater' it provides for free to the public - in attracting attention to the theater and in ensuring the success of both the building and theater productions on the whole? This project introduces a public loop (as in the CCTV), and it exposes to the visitors how the theater and its backstage works. Why do you incorporate a feature like this and what do you hope that it accomplishes?

DG: We try always to blur the line between private and what is public, just to get people familiarized with the program. In this area there is a night market and we expanded on that plane of the square in front of the building, underneath the volumes and up into the lobby, creating a space of a very familiar type of culture within the city. Most of the people normally don't go to the theater or to the opera, but simply because the building is so close to the night market, we wanted to pull these people through and not only show them what is actually inside, but also show the theater-making process. So that's why we pull them through all of the backstage spaces, and also pull them through the green rooms and the cafes and the public viewing decks… Blurring that boundary is very important for people to transition to actually use the space and experience the space. And that's why we do it -- to make something more accessible.

AD: With a project like this, I can imagine that there are many challenges. Can you speak about some of the unexpected challenges? The project is able to put together three types of stages, by sharing one central backstage core, the main cube. Which where the structural challenges to achieve this configuration?

DG: Because the diagram of the project is so unbelievably clear, actually the structure of the building, once we solved how we could build the cube to sustain the cantilevers, it was actually remarkably easy to build it. Not that it wasn't a challenging structure, but everyone was aligned in how we should do it. We also found a contractor that really understood the essence of the building and they just executed it.

To be very honest, compared to many of our buildings in the Asia region, this has been a smooth process because all of the parties -- government, architects, engineers, contractors, the neighbors, the night market people -- they were all aligned quite early in the project, and everybody knew what role to play. And now we have the skeleton of the building, and the building will be finished in one in a half years from now. It has been very smooth compared to many projects.

Of course there have been many unexpected things to resolve, but in general, it's still in essence the same thing that we designed in the competition, and it's clear that it will remain so.

AD: Finally, performing arts are important in Taiwanese culture. Which were the main inputs from theater/performance consultants to make sure this particular configuration will work properly for its intended use?

DG: It's designed as a machine for everything to take place -- traditional theater, opera, dance -- everything can happen there in the different configurations of the building. And because everyone saw that opportunity, they aligned themselves with the goals to create because they were already thinking about the shows that could be performed in there that you cannot perform in any other theater in Asia, and maybe around the world. It was immediately understood that this was not designed to be a building for architects, it was designed as a tool to work with. And because they understood that, very early on in the process there was a lot of cooperation in accommodating the diagram.

It's very rare that clients and the architect and engineering team are all going for the same thing, and that's why it went so unbelievably fast to go from a competition design to a skeleton of a building, in such a prominent place in the city that everyone knows and everyone goes to when they go out. A very interesting momentum was created. We still sometimes say, "is this real?" because it went in such harmony and at such a speed that happened to our own surprise.