The OMA / Reinier de Graaf-designed Nhow Amsterdam RAI Hotel has topped out at its 91-meter height. The main hotel for the RAI Amsterdam convention and exhibition center, the scheme will offer 650 hotel rooms across 25 floors. Formed of three shifting triangular volumes, the scheme draws from a triangular advertising column on the Europaplein that once stood prominently on the site.

OMA was chosen ahead of eleven practices to design the project, which will operate as a hub for business travelers, tourists, and Amsterdam locals. The project has been 15-years in the making, as a larger 800-room proposal was once rejected by the city a few years back. 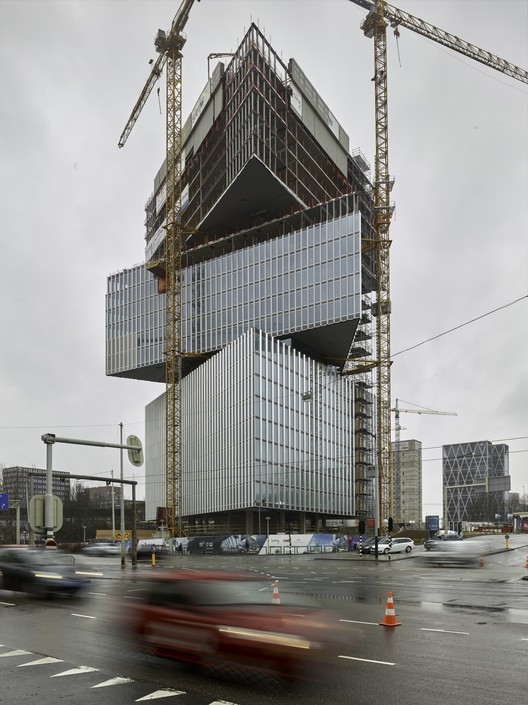 Clad in aluminum and a filling of glass panels, the scheme’s 19 hotel floors will be complemented by a double-height hotel lobby, separate rentable retail space on the ground floor, and a hotel lounge and bar on the first floor. As the scheme rises, the orientation of the stacked volumes allows the floor plan to rotate 60 degrees with each ascending volume.

At the eastern side of the building, the scheme contains space for loading and unloading goods, taxi stands, a drop-off for bus passengers, and access to a two-story 200 space parking basement. The scheme will also offer an underground concourse connecting the building to the adjacent convention center.

The top floor offers a series of public and semi-public facilities, providing a panoramic view of Amsterdam. The area, named “On Air” includes meeting and conference rooms, lounges, and a television broadcasting studio.

Amsterdam taxi drivers are the kind of people who tell you their honest opinion. Whenever we pass the RAI Nhow Hotel, their unsolicited comments are positive without exception. As the architect, I take this as a big compliment.
-Reinier de Graaf

The scheme has been in developed in collaboration with COD and Being Development, and is expected to be open to the public in early 2020.

News of the scheme comes shortly after OMA released a construction update for their performing arts center in Taipei. The firm's founder Rem Koolhaas was also recently featured on the album for electronica band Tempers.