OMA has released images and plans for the new Feyenoord Stadium at the Maas. Feyenoord will set up a new multi sports club for the residents of Rotterdam Zuid, as OMA designed the masterplan after reaching initial city approval in 2016. The 63,000 stadium will rise along the river as the largest football stadium in the Netherlands. The stadium features a perfect bowl shape formed by continuous curved tiers in close proximity to the pitch, and will feature a main concourse with views into the stadium across the Rotterdam skyline. 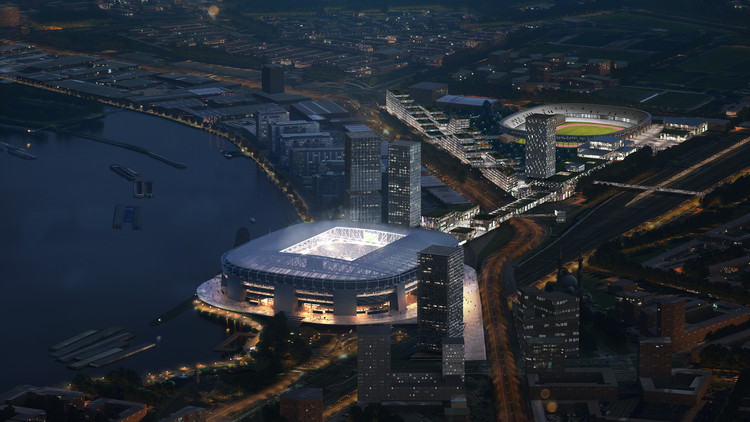 Led by OMA Managing Partner David Gianotten, the Feyenoord Stadium was designed with Kees van Casteren and Shinji Takagi. The new Feyenoord stadium is part of a larger urban masterplan for Rotterdam South – Feyenoord City – that has been developed by OMA in collaboration with Football Club Feyenoord, Stadium Feijenoord, the Feyenoord City project team, and the municipality of Rotterdam over approximately the past 2.5 years.

Gianotten said that: “The new Feyenoord Stadium will be as iconic and intense for the supporters and players of Feyenoord, and for the Dutch national team, as the historic Stadium de Kuip has been – but now fulfilling all top level UEFA regulations, and setting a new benchmark in contemporary stadium design. We look forward to finalizing the design and seeing the completed stadium in our hometown of Rotterdam.”

OMA's masterplan for Feyenoord City consists of five main elements: a new and larger stadium for Feyenoord, renovation of De Kuip, and development of the Urban Bridge, the Strip and the Kuip Park. The current stadium De Kuip is to be renovated and redeveloped into apartments, commercial space, an athletics sports center and a public square. The area surrounding the stadium, de Kuip Park, will offer green space for sport and leisure activities as well as residential units. De Strip, a three-dimensional pedestrian walkway, will connect the old stadium with the new stadium and include new public and commercial space as well as parking facilities.

Following the official approval of the schematic design by Feyenoord, OMA will proceed with the detailed design of the stadium. The new stadium is planned to open in 2023. 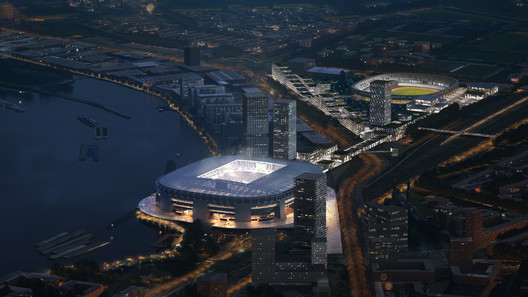