Results have been announced for the 5th Global LafargeHolcim Awards for Sustainable Construction, with three women-led teams awarded the gold, silver, and bronze positions. The design competition asked participants to speculate on future methods of balancing environmental performance, social responsibility and economic growth, “exemplifying architectural excellence and a high degree of transferability.”

The competition attracted over 5,000 submissions from 131 countries. Having been regionally assessed by juries in Europe, North America, Latin America, the Middle East/Africa and Asia Pacific, 55 successful proposals were entered for the global awards, where six winning schemes were selected.

Commenting on the winners, Jury head Alejandro Aravena praised the "masterful pieces that demonstrate what sustainable design and construction can achieve…although not something considered during the evaluation process, the jury was delighted by the strong representation and success of women in the LafargeHolcim Awards.”

The Gold, Silver, Bronze awards and three acknowledgment schemes are set out below.

The Gold Award was won by "Hydropuncture," a publically accessible water retention and treatment complex in Mexico. The scheme is situated in an underprivileged area of Mexico City, merging flood basins and public amenities in spaces informed by the logic of flowing water. The jury was impressed by the scheme’s “sophisticated address of an urgent issue at a scale with real impact.”

The Silver Award was claimed by "Legacy Restored," a religious and secular complex in Niger, reinterpreting vernacular construction for a mosque and community center. The scheme creates civic space to support the education of women, and champions local artisanship with traditional building techniques and materials produced in the immediate surroundings. The jury was impressed by the scheme’s use of architecture “to give dignity to fragile rural communities losing population to urban migration.”

The Bronze Award was won by "Grassroots Microgrid," a community-driven neighborhood planning scheme which re-purposes derelict land in Detroit, USA as spaces for collective infrastructure, including food, energy, and civic engagement. The scheme enables neighborhoods to push towards energy autonomy through micro-infrastructure at a local level, with the jury commending the scheme’s “community-driven initiative.”

Based in Karaga District, Ghana, "Refrigerating Jar" manifests as a series of towers for butter storage, designed for passive cooling in a traditional architectural language. By storing and processing nuts, the scheme enables the local community to sell shea butter as a skin moisturizer at a time of maximum financial return.

Based in Punta Loyola, Argentina, “Territorial Figure” is an infrastructural landscape project for the production of electricity based on tidal flow in the Río Gallegos estuary. The scheme aims to address the potential ramifications of human-induced climate change on the natural environment.

The 6th competition will be open for entries in mid-2019.

As we face a global climate crisis that must be addressed, sustainability has quickly become one of the most crucial aspects to consider in contemporary architecture. Designs that go beyond current standards, showcasing sustainable responses to technological, environmental, socioeconomic and cultural issues have arisen in recent years, garnering much-deserved praise for the innovative and environmentally-friendly solutions they propose. 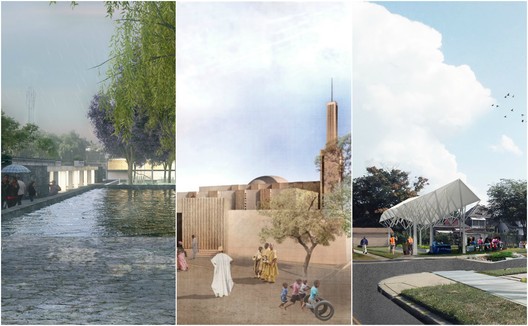