As in previous years, the winners showcase a wide spectrum of different types of building, giving an insight into how diverse the profession has become in recent decades. High-profile practices take their place as ever, with winners such as Foster + Partners’ Apple Store in Chicago and OMA’s office building in the Hague showing that establishment firms are still able to make their mark, as in more traditional award systems. Alongside these are previously unsung heroes, such as Emergency Architecture & Human Rights with their series of classrooms for the children of the Za’atari refugee camp in Jordan—designers who have demonstrated their ability to make real, positive change where it is needed most. Finally, there are projects such as the Santa Fe de Bogotá Foundation by El Equipo de Mazzanti or Heatherwick Studio’s Zeitz Museum of Contemporary Art Africa, which challenge the still-common belief that world-class examples of virtuoso architecture are concentrated only in historically privileged parts of the globe such as the US, Europe, and Japan.

The winning buildings represent the values of our mission, bringing inspiration, knowledge, and tools to architects around the world. Neither ArchDaily nor the Building of the Year Awards would be possible without the continued generosity of the firms that choose to publish their projects with ArchDaily every year, or without the engaged readers who take part in the voting process. Congratulations to all the winners!

This year ArchDaily partnered again with Saint Gobain to present the Building of the Year Awards. 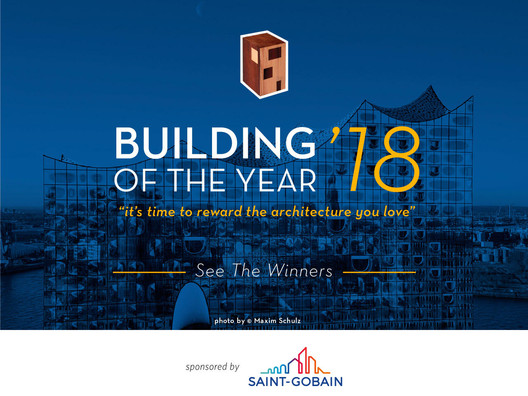