In their video series for the November 2017 World Architecture Festival, PLANE—SITE delves into contemporary concert hall design. The five films highlight major themes in today’s musical architecture through an interactive, multimedia panel. Using Harpa Concert Hall in Reykjavik, Wroclaw’s National Forum of Music, and the Philharmonie de Paris as examples, the videos show how contemporary concert halls are more technological and multi-functional than ever before, demonstrating how architecture redefines the modern-day musical performance experience.

The series acted as a starting point for a conversation between the WAF audience and panelists, moderated by PLANE—SITE’s Andres Ramirez. Panelists included Michel Cova of dUCKS scéno, Tateo Nakajima of Arup, and Jacob Kurek of Henning Larsen.

The Expression Of Sound

Typically, we see a venue’s facade more than the stage inside. Concert halls can be a city’s mascot but they need to invite the public in too. The building facilitates both the separation and bringing together of artists and audience. Additionally, the threshold experience is integral to the multifunctionality of a venue. How do cultural spaces, such as concert halls, stay “alive” when there isn’t a performance going on inside?

Performance In The City

Concert halls have the power to be a catalyst for urban change. At this scale, architecture can add to a city’s identity, weave together the urban fabric, and even instill social transformation. Wroclaw’s National Forum of Music is an excellent example of this. This PLANE-SITE film looks at how the concert hall and city work together.

Scenography of Space: More Than Music 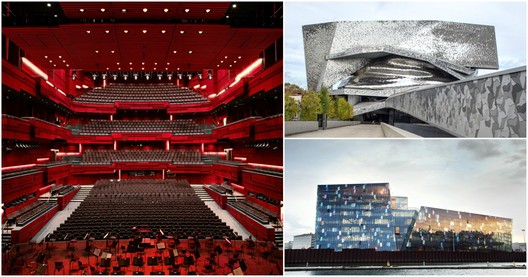