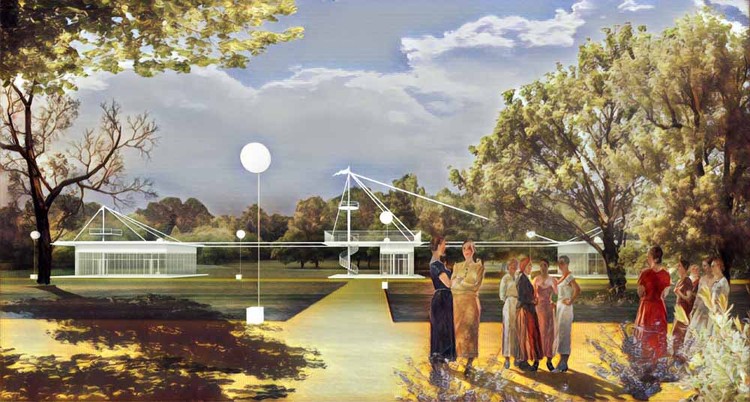 The two primary project goals are the restoration of the existing terminal building and pathways, as well as an architectural intervention, creating a new park experience. In order to connect the city to the river, and create new life within the park, the designers overlaid the existing orthogonal grid with the geographical form of Russia’s river system. The design maintains the original, simple park structure and main axis, which connects the city to the river, while adding a new thematic route.

The result is a series of alternative, organic routes that fall between existing trees and represent a calm, leisurely sea voyage. The designers wanted to achieve, “the mood of the Khrushchev Thaw,” the time period when repression and censorship were on the decline in the Soviet Union, and art was on the rise. The park is to be, “the utopian dream of a happy Soviet childhood which initially existed when the park was laid out,” according to Sergey Pereslegin, partner of Kleinewelt Architekten bureau.

Each of the architectural elements are named after a city and placed along the new pathway system according to their individual city’s location on Russia’s river system. For example, the main Terminal building is Moscow, the large belvedere is Saint Petersburg, and other cities are represented as well, including: Kazan, Samara, Volgograd, and Kargopol. Even the exhibition pavilion and sports complex symbolize the Vychegda and Onega Rivers respectively.

The architectural elements are nostalgic pieces that act as reminders of Soviet past. Because the existing park was constructed in both the 1930s and 1960s, Citizenstudio focused on the northern park objects and designed them in the 1930s style, while Kleinewelt Architekten designed the southern park objects in a primarily 1960s style. North park includes the exhibition hall and ice hockey rink, while the south park houses the restaurant and children’s playground. The new restaurant, Volga, will be constructed primarily of glass to give visitors unparalleled views of the river.

Small, light-weight, wooden gazebos are located throughout the park. The gazebo designs are derived from the River Terminal’s architecture which includes arched windows and openings.

Learn more about the park, here. 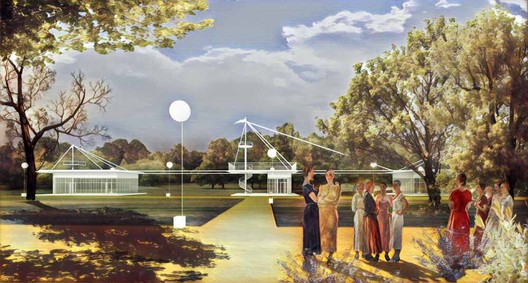 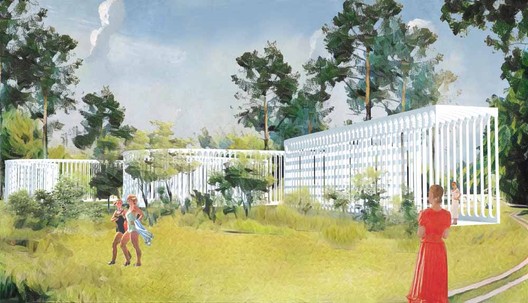