Eleven of the United States’ most prestigious architects have been selected by developers Hoffman-Madison Waterfront (HMW), to commence Phase 2 of The Wharf, a $2 billion neighborhood situated on the southwest waterfront of Washington D.C. The development is adjacent to the National Mall, spanning 24 acres of land and 50 acres of water.

“We have selected a diverse group of locally, nationally, and internationally renowned designers, knowing they will bring their talent and expertise to The Wharf, building a waterfront neighborhood that is an integral part of the city,” said Shawn Seaman, principal and Senior VP of Development at PN Hoffman.

In addition to Phase 1, which is set to open later this year in October, Phase 2 comprises of 1.2 million square feet of mixed-use development that includes parks and green space, along with commercial, residential, marina and retail space, expected to be complete in 2021.

The selected firms and their associated roles are:

Headed by Stanton Eckstut, Perkins Eastman will be responsible for further progress on The Wharf's original master plan, as conceived by Eckstut, who will continue to guide the neighborhood's look and feel as master planner. The firm began work on the project in 2008 and is also responsible for all of Phase 2’s infrastructure and underground parking. Notable projects include New York’s Battery Park City and Huishan North Bund in Shanghai.

Given their wealth of experience in waterfront projects, including the Pier 15 East River Waterfront, SHoP will be designing two office towers and their corresponding retail space. The practice is renowned for its advanced office design, and is currently designed the 43,000 square foot Uber Headquarters in San Francisco, as well as the 1,000,000 square foot Midtown Centre in Washington. The firm has received Smithsonian/Cooper Hewitt’s “National Design Award for Architecture”.

Based in DC, WDG will work in collaboration with SHoP as Architects of Record in the design of Parcel 6 & 7 towers. Since 1938, the practice has designed over 500 buildings across a variety of typologies, including commercial office, multifamily residential, hospitality, higher education and mixed-use. Currently, WDG is also involved in the design of the Midtown Centre, and in Phase 1 was responsible for the VIO and Incanto residences, to be completed this year.

ODA will design mixed-income apartments and additional retail spaces planned for Parcel 8. The young practice was founded in 2007, and has since rapidly developed a reputation for its innovative designs, focusing on social responsibility the modem urban setting. Notable projects include the National Library of Israel, the adaptive reuse of 15 Union Square West and the award-winning Hunters Point South, which was New York’s largest affordable housing project in forty years.

With a variety of buildings across six continents, Rafael Viñoly Architects is a highly acclaimed global firm, whose work includes museums, academic institutions and performing art venues. Having previously completed numerous luxury residential projects such as 432 Park Avenue and One River Point, the practice will be responsible for the design of luxury condominiums in Phase 2.

New York based Morris Adjmi Architects will design the Parcel 10 commercial office, having previously completed related projects for Samsung and Theory. With its modern use of materials and industrial forms, the practice has become iconic in New York over the last 20 years and continues to develop on a national scale. The District has also recognized the architects for their work with the Atlantic Plumbing housing development.

Specializing in civic, mixed-use and workplace design, STUDIOS is set to complete a multi-purpose marina services building for The Wharf. Since its inception in 1985, the firm has become increasingly well known for the melding of core building with interior spaces in order to redefine building usage, and has as a result won numerous awards.

Selected to develop the marina, Hollwich Kushner is a prominent practice out of Lower Manhattan, and are winners of the acclaimed MoMa/PS1 Young Architects Program with their design of Wendy. The practice’s former clients make a diverse group, including Vornado, WeWork, Uniqlo, and the University of Pennsylvania.

S9 Architecture views each project within its overarching urban surroundings, combining this contextual approach with modernity to create ideal spatial experiences for users. The firm has completed mixed-use, cultural, residential, commercial, and adaptive reuse projects, and is currently working on Dock 72 and Empire Stores in Brooklyn, the New York Wheel on Staten Island, and 606 Broadway in Manhattan. Other completed projects include Ottawa’s Lansdowne Park and the Industry City Master Plan for Brooklyn.

MMVA will be responsible for M Street Landing, an outdoor public space connecting the waterfront to Arena Stage. Having experience with the designs of Hudson Park and Boulevard, as well as the popular Brooklyn Bridge Waterfront Park, the firm derives inspiration from rational and poetic elements of landscape to connect with and design for their users.

Wolf | Josey Landscape Architects were central to Phase 1 of The Wharf, leading the planting and detailing of the promenade, and both ground-level and rooftop public spaces. The firm has worked on various DC-based landscape projects and notable designs include the National Zoo’s Asia Trail, and Waterfront Park.

More information about The Wharf can be found here. 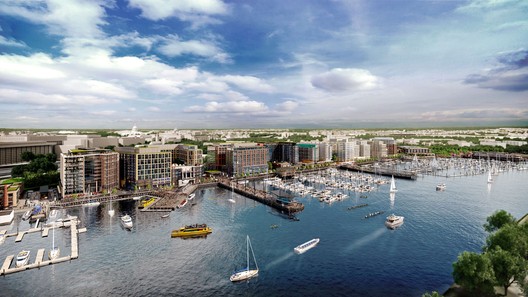