Jyväskylä, a city whose status as the center of Finnish culture and academia during the nineteenth century earned it the nickname “the Athens of Finland,” awarded Alvar Aalto the contract to design a university campus worthy of the city’s cultural heritage in 1951. Built around the pre-existing facilities of Finland’s Athenaeum, the new university would be designed with great care to respect both its natural and institutional surroundings.

The city of Jyväskylä was by no means unfamiliar to Aalto; he had moved there as a young boy with his family in 1903 and returned to form his practice in the city after qualifying as an architect in Helsinki in 1923. He was well acquainted with Jyväskylä’s Teacher Seminary, which had been a bastion of the study of the Finnish language since 1863. Such an institution was eminently important in a country that had spent most of its history as part of either Sweden or Russia. As such, the teaching of Finnish was considered an integral part of the awakening of the fledgling country’s national identity.[1] 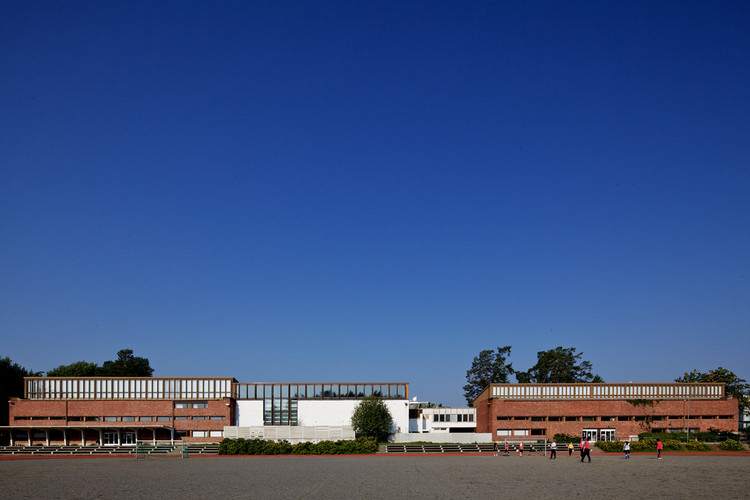 Announced in December of 1950, the design competition for the university called for an entire campus plan that would outline uses for the existing buildings and introduce a new heating plant, refectory and dormitory building, main building, teacher training facility, housing for university staff, saunas, as well as a sports field and playground. All entries were delivered in May of 1951 and, by June 6th, the jury had unanimously selected Aalto’s horseshoe-shaped proposal.[2]

Aalto’s entry, entitled ‘URBS,’ laid out the campus buildings in a large U-shape, the center of which contains the sports field and a number of tree-lined circulation paths. This inner sanctum of the university was closed off to vehicular  traffic, reserving the space for pedestrians. Each new building was equipped with two entrances, serving as conduits from the city to the more discreet court.[3]

Although Aalto chose to shelter the inner campus, he took care to ensure that the university would still interact with Jyväskylä in a meaningful way. The university is accessed via a diagonal road that leads to the city’s primary commercial thoroughfare, linking directly to the school’s main entryway.[4] The inclusion of a meeting and concert hall also allowed for the provision of public utility beyond education, integrating the university into the urban fabric not only as an academic facility, but as a public and intellectual center.[5]

This public gathering space, known as the ‘festival hall,’ forms one of three distinct sections of the main building, which Aalto considered to be the most important design task of the entire project. Along with the festival hall, the building also contained an administrative wing and a central thoroughfare that links each section and provides access from the entrance square to the court of the inner campus.

The entrance to the Festival Hall sits at the center of the building, its fanned floor plan echoing the shape of the lecture halls into which it leads. The front end of the room is almost entirely glazed with floor-to-ceiling windows, looking out onto the forest surrounding the foyer. The light that streams in through these windows is reflected and diffused by the gleaming marble floor and white wooden slats of the ceiling, creating a light and airy atmosphere throughout the space.

Three staircases lead up from the foyer to the lecture halls. A rhythmic series of vertical mahogany bars line the sides of each stairway, echoing the trees visible just outside the entrance hall’s vast windows. The main stairwell, opposite the front doors, leads directly to the center of the Festival Hall[6]; the others, flanking either side of the foyer at the same oblique angles as the walls themselves, arrive at the halls after a series of three mezzanine landings. This stair configuration reflects the interest Aalto had in mimicking aspects of Mediterranean hill towns at the time; the lecture hall stairwells allude to the stairs between the walls of surrounding buildings in such towns. He used a similar treatment in the ceremonial main stairwell of his Säynätsalo Town Hall, which was nearing completion while Aalto was designing the University.[7]

From the beginning, Aalto wanted to create the Festival Hall out of a combination of multiple lecture halls – an approach not shared by any of his rivals during the competition. It was a poetic gesture to use spaces that were, according to his project proposal, the “focus of everyday academic work” to create something less mundane when the time arose. The hall is lit by clerestory windows at its rear end and the light diffuses along the white clamshell ceiling, which is composed of bent plywood panels and linear concrete beams. The walls, meanwhile, are built of Aalto’s trademark red brick, providing a visual contrast to the lighter touch above.[8]

The Festival Hall ‘portion’ of the main building, with its series of fan shapes, stands in direct contrast to the administrative wing of the building, which takes a rectilinear form. Visual emphasis is therefore placed largely on the festival hall; with its more imaginative layout and roof line, it takes definite visual precedence over the comparatively banal administrative wing.[9] This method of defining a specific portion of the building through non-rectangular form is not an uncommon in Aalto’s work, who would use the same system for his House of Culture in Helsinki four years later.

The campus as a whole is seemingly created to give the impression of a community built incrementally over time. The same interest in Italian hill towns that informed the festival hall staircases influenced the overall aesthetic of the university’s new buildings: shed roofs and brick walls rose across the entire campus, with each one recessing to form partially open courtyards. Aalto was not only influenced by Italian towns, but by Ancient Greece, as well. The ideal Greek city was to embody several fine harmonies: mind and body, knowledge and athleticism, logic and nature, amongst others. Placing a sporting venue at the center of the instruction spaces implied a balance between the two, echoing traditional urban Greek ideals.[10]

The University of Jyväskylä continues to be a prominent academic institution in Finland. With over 15,000 students from almost 100 countries enrolled, Aalto’s campus is home to a large and cosmopolitan audience to this day.[11] Like the city from which its nickname is derived, the “Athens of Finland” would seem to have achieved its goal of constructing an academy worthy of its illustrious academic history.