Save
LOBBY #2: Projecting Forward, Looking Back
Share
Or
Copy

From Vitruvius to Le Corbusier, words and writing have always played an essential role in architectural discourse. One could argue that crafting words is akin to orchestrating space: indeed, history’s most notable architects and designers are often remembered for their written philosophies as much as they are for their built works.

With the exception of a few of architecture’s biggest names, the majority of practicing architects no longer exploit the inherent value writing offers as a means for spatial and theoretical communication. This trend is exacerbated by the fact that many architectural schools place little emphasis on the once-primary subjects of history and literature, resulting in a generation of architects who struggle to articulate their ideas in words, resulting in an ever-growing proliferation of ill-defined “archispeak.”

LOBBY is an attempt from students of London’s Bartlett School of Architecture to reclaim the potency of the written word, presenting in their second issue an ambitious array of in-house research and external contributions. The theme is Clairvoyance, and the journal seeks to investigate the ways in which architects are forced to constantly grapple with the possibilities and uncertainties of designing spaces that exist in the intangible realm of the world-to-be. 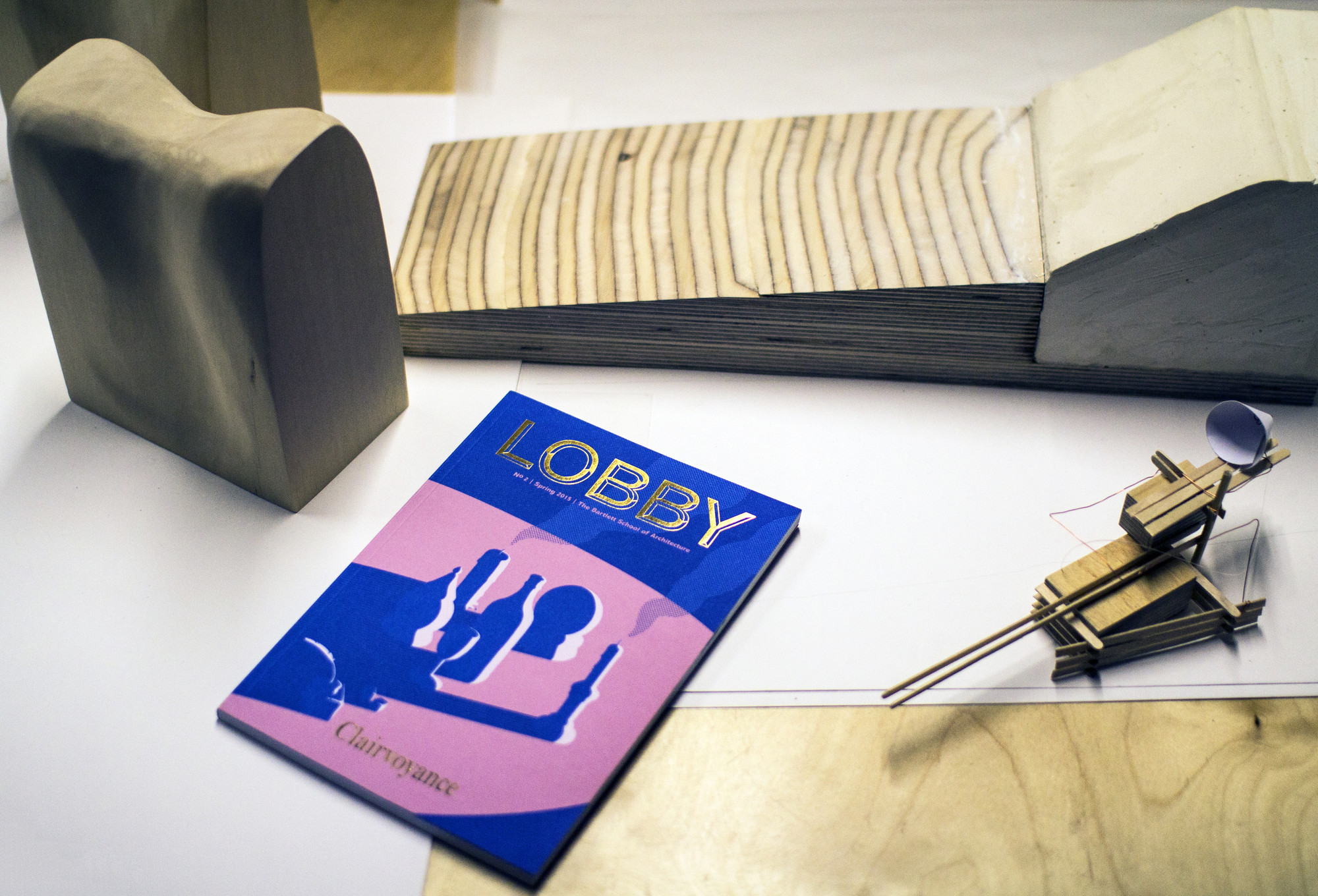 Consistent with its name, and the structure of the first issue, LOBBY is a theoretical platform for discussion which is organized in sections named for the physical spaces of the studio building including Reception, The Exhibition Space, The Seminar Room, The Lift, The Crit Room, The Staircase, The Library, and The Toilets.

According to Editor-in-Chief Regner Ramos, the journal is an effort to combat the school’s tendency towards academic introversion, enhancing connections across UCL departments, other institutions, and professionals in the field. The second issue features an impressive array of architects, theorists and writers, encompassing student work to exclusive interviews with Francine Houben of Mecanoo and Daniel Libeskind.

As a whole, the volume presents the reader with an incredible variety of topics, always touching upon the recurring themes of cities and urbanism, past narratives, and visions for the future. There are two articles in particular which engage our common attitude towards the future. One, a piece by undergraduate UCL student Patch Dobson-Pérez, compares Walt Disney’s playful science-fiction visions of tomorrow to NASA’s relentless innovative pursuits, urging for a mediation between the two. Presented early in the volume, within the Exhibition Space, lies an entertaining interview with Daniel Libeskind in which his typically idiosyncratic responses to questions on life, work, and ideas related to architectural clairvoyance are a joy to read. Here we are afforded a glimpse into Libeskind’s early career, his professional struggles, and his personal story of the design of Berlin's Jewish Museum.

LOBBY is particularly unique because it connects rigorous research, contemporary architectural issues, and student work in a way that is neither intimidatingly academic, nor condescendingly superficial. In fact, many of the essays could be published as individual works. The reading experience of the journal is refreshing not only because it engages the architectural discourse at large, but also tackles a wide variety of related topics surrounding history, urbanism, and contemporary professional practice. Highlights in relation to this include an introduction to the “prepping movement” of New York City, a critical evaluation of the significance of architectural competitions in envisioning the future, and a look at the influence of the male ego in architecture.

The journal has found a balance in curating student works that go far beyond their graphic appeal. As a result, the journal successfully avoids the trap of self-adulation - something which many university journals lapse into. Additionally, the student work succeeds in furthering the central theme of Clairvoyance and is always born out of a broader, rigorously developed theoretical context. Images used are consistently informative, also avoiding the common trap of 'glitzy' architectural representation devoid of unique content.

The Seminar Room, guest edited by ArchDaily Editor James Taylor-Foster, translates the idea of the academic architectural discourse and re-presents it in print. It introduces excerpts from Elias Canetti’s Masse und Macht (Crowds and Power), and Peter Carl’s Civic Depth. Following these readings are a series of short essays on the subject of urbanism and crowds. For me, the most compelling content of the section can be found in a printed discussion between Patrick Lynch, Giovanni Bellotti, Shumi Bose, and James Taylor-Foster which was held at the Bartlett in January of this year. Verbal conversations tend to distill complex ideas to their most comprehensible elements, while simultaneously bringing out related themes and observations. Their discussion encompasses a staggering range of historical references, forcing the reader to critically compare the spatial ideas behind sites as old as Castel Sant’Angelo in Rome, to contemporary works such as Frank Gehry’s Fondation Louis Vuitton in Paris.

In The Lift we are taken on a journey through cities around the world, seeing glimpses of projects that deal with technology and machinery. Following this section we are given the unique opportunity to view four student projects alongside the criticisms of Jorge X Méndez-Cáceres and Seda Zirek, while simultaneously reflecting on the nature architectural education. The Staircase, The Library, and The Toilet conclude our literary experience by elaborating on the various architectural concepts previously presented in ways that cleverly go beyond what we are traditionally faced with in discourses such as these. Highlights of these sections include a look at the ways greenery is used for security and surveillance, an essay on Vitruvius and the role of the architect’s voice, and an exploration of mobile phones in analyzing urban crime patterns.

Crammed with insightful content, this second issue of LOBBY presents the most pressing issues facing architecture today from new angles and perspectives in a thoroughly enjoyable narrative experience. Though only in its second issue, the journal will surely become a favorite among many. We're left in baited breath for the next issue to come!

LOBBY will launch today, Friday 27th of March – find out more about their launch event here. Follow them on Twitter to keep up with future issues.