To paraphrase an old adage, "behind every great building is a great architect." According to Swiss-based Kosmos Architects, a less familiar version of this might say "beside every great building is a perfectly mixed cocktail." The firm has revealed a scientifically (un)proven link between alcohol and architecture: ramps, for instance, are often built at an inclination of five to seven degrees, a statistic that correlates to the alcoholic percentage of an average beer. Furthermore, a steep forty-degree roof incline designed to throw off snowfall matches the forty percent alcohol content of vodka used in Arctic climates to keep out the winter chill.

Kosmos Architects has published a series of twelve illustrated postcards, linking iconic buildings with their appropriate drink. A Manhattan for Mies, a Blue Blazer for Zumthor, and a Smoky Martini for Herzog & de Meuron all belong to the series 'Good Drinks & Good Buildings,' a booze-soaked comparison of architecture and alcohol, just in time to ring in 2015.

What's inside SOM's martini? Find out after the break 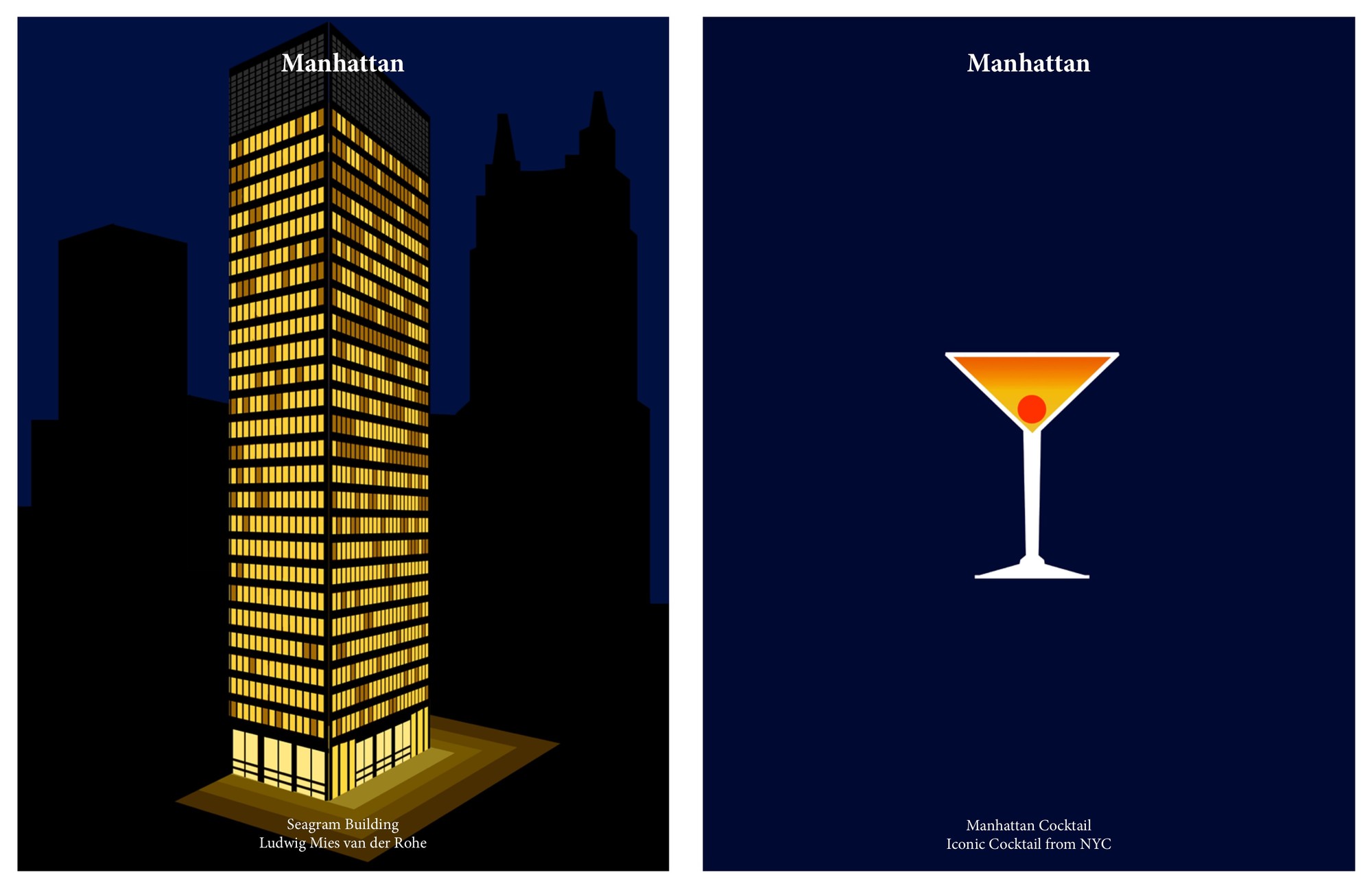 Inspired by the unorthodox fire-based construction of Peter Zumthor's Bruder Klaus Chapel, the Blue Blazer Cocktail must be set aflame before drinking from a silver plated vessel.

Mixed with Laphroaig whiskey and gin from the peat covered Scottish highlands, the Smoky Martini pays homage to a building made of locally sourced rammed earth.

The melancholic architecture of Böhm's brutalist masterpiece is the perfect partner for the ginger beer, dark rum, and lime juice of Dark and Stormy, served in an aged glass over ice.

Portugal's modern concrete pyramids recall ancient times and rudimentary techniques, a natural pairing for a biting cocktail with whiskey, brandy, vermouth, and a hint of orange.

Leutschenbach School by Christian Kerez / B52

An elaborate layered cocktail of coffee liqueur, Irish cream, and grand marnier, the B52 mirrors the stacked design of the school through a clever combination of varying densities and shades of alcohol.

It was only fitting to pair New York City's infamous cocktail with van der Rohe's iconic Seagram Building, featuring a dash of modernism, some sweet vermouth, whiskey, bitters, and a cherry with a twist of orange zest.

Enter the world of the industrial revolution under the plate glass and cast iron roofs of Paxton's sprawling Crystal Palace, and sip on an Old Fashioned featuring a cube of sugar, bitters, and whiskey, mixed over ice in an appropriately old glass garnished with a lemon peel.

Picture yourself on the island of Capri on Italy's southern coast sipping on a Negroni, one of the nation's famous aperitifs. The two are both pink, Italian, and on the rocks, but only one features a delectable combination of gin, campari, and vermouth with club soda.

Immerse yourself in the glamour of Cannes with a Bellini on the Mediterranean, featuring a bit of bubbly mixed perfectly with peach puree, served in a champagne flute. An ideal location to relax, the orange bubbly architecture of Palais Bulles perfectly mimics the Bellini.

Kosmos Architects is a Swiss-based firm with offices in New York and Moscow. Read more about their previous work featured on ArchDaily, here.