Last week, the 2014 Serpentine Pavilion opened in London's Hyde Park. The Serpentine Pavilion program invites architects who are yet to work in the UK to create a temporary installation at the gallery's grounds for one summer, and this year it was the turn of Chilean architect Smiljan Radic, who rarely builds outside his native country and is arguably the least well-known architect in the Pavilion's 14 year history.

Always a highlight in London's architectural calender, critics almost line up to write their reviews. This year, they are almost entirely unanimous: Radic's pavilion is, unquestionably, weird. But they're also unanimous on another judgement: it may be one of the best Serpentine Pavilions yet. 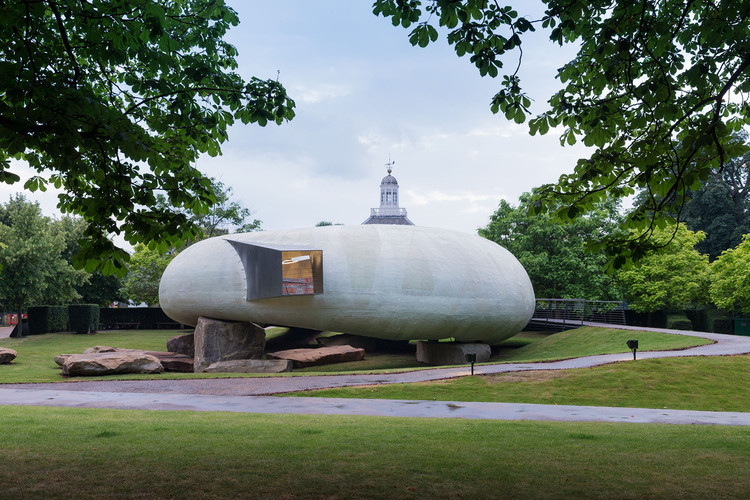 Writing for The Telegraph, Ellis Woodman recounts how, along with the last year's pavilion by Sou Fujimoto, the Serpentine Pavilion programme has had something of a renaissance in recent years, after struggling with international stars who were perhaps too busy to give the pavilion their full attention.

He is full of praise for Radic's bizarre building, saying that it "strenuously resists description in conventionally architectural terms," concluding:

Seeming to belong at once to a world of science fiction and to a primordial past, the pavilion could well serve as the film-set for a post-apocalyptic drama. And yet seen in the bucolic setting of Kensington Gardens, it also invites association with the use of ruins and grottoes in the eighteenth century English landscape garden. If none of those readings is ever allowed to dominate, that is much to the design’s benefit. What is most captivating about Radic's heroically peculiar pavilion is the way that it seems to stand out of time

"It really is very odd"

Edwin Heathcote, writing for the Financial Times, almost seems demonstrate Woodman's point that the structure defies description, with a review full of caveats and logical twists:

The interior is curious. Something between a yurt, a Portaloo, a marquee and a paper lantern, it is a very odd hybrid with a rather calming effect. The hole in the centre becomes a solid core so that it is like being inside a large translucent tyre, which, it turns out, is actually a good thing.

When it comes to discussing Radic's concept behind the pavilion, which included inspiration from Oscar Wilde's short story The Selfish Giant, Heathcote says: "Frankly, I don’t really see it. But that’s OK."

"The weirdest structure yet"

Oliver Wainwright of The Guardian continues the weirdness appreciation parade, focusing on how the pavilion (and Radic's architecture in general) "revels in material juxtapositions, contrasting geological power with the delicacy of things that feel woven or grown":

It is jagged and smeary, a texture offset by fine steel wires that hang a zigzagging lighting rail through the space, and an angular window, sharply sliced out to capture views of the lake beyond. It is a careful assembly of things that are both ragged and refined, contrasting roughly hewn with smoothly polished.

His pavilion is charged with all manner of similarly playful tensions. Opacity vs transparency, solid vs light, strong vs fragile and inside vs outside are just some of preoccupations addressed in this year’s commission... the most intriguing of these clashes is centred on a far more traditional architectural idea, the folly.

Referring to the fibreglass shell, which was designed to replicate the appearence of papier mâché, he comments that the pavilion is "every inch an architectural model writ large," concluding that the structure is "one of the most esoteric examples yet of a coveted architectural programme."

"An idea that looks forward as well as back"

In the London Evening Standard, Robert Bevan admires the pavilion's marriage of a "neolithic monument" with "something vaguely alien and futuristic," commenting that Radic's architecture is "a more playful, childlike approach to building than most architects will allow themselves."

Offering one solitary, minor  criticism - or rather, more of a suggestion - he says:

Radic’s pavilion would work a touch better if nature were allowed to take its course and the grass around the pavilion allowed to lengthen and grow meadow-wild as it does in other areas of the park, instead of being mown.

But ultimately he sees the pavilion as a success, praising the choice made by Serpentine curators Julia Peyton-Jones and Hans Ulrich Obrist:

It tends to be the more abstract pavilions that work best, those that are a tailored response to place and the natural setting rather than miniature versions of an architect’s usual style. This makes the cerebral Radic an excellent choice.