Save
Sam Jacob & Wouter Vanstiphout on Curating "A Clockwork Jerusalem"
Presented by:

AD: What is this exhibition all about and what is the meaning of the title, ‘A Clockwork Jerusalem’?

WV: ‘Clockwork’ derives from A Clockwork Orange, a famous dystopian film by Stanley Kubrick that used the [then] brand new Thamesmead development in London as a backdrop. ‘Jerusalem’ - a new Jerusalem as featured in the poem by William Blake, introduces the source code of modernity in England due to the moral outrage with the industrial city, out of which came the plea and ambition to build a ‘new Jerusalem’ on “England’s green and pleasant land.”

AD: The exhibition is an interesting collaboration between a Dutch historian and a British architect. How has this influenced the curation of the show?

SJ: We thought it was simply a really important thing to do. The concept of a national pavilion is a strange idea in the first place; in the 21st century world the idea of the ‘state’ is a confusing thing anyway so, to work with Wouter and Crimson was a way of evading a certain kind of parochialism that often invades a national pavilion. It also draws on a long history that we have - we worked together ten or so years ago when Crimson were essentially our clients in a satellite town of Rotterdam for a park and cultural centre.

AD: For a British person the exhibition it can seem very familiar and for a foreigner looking around it uncovers a kind of hidden history. Would you agree with that?

WV: As a foreigner and someone who’s been involved in making this exhibition I think that the British sometimes tend to underestimate the global impact of their own cultural references. For example, we showed around Aurélie Filippetti, the French Minister of Culture, who saw Joy Division in Hulme and said how much of a fan she was of them! Sam guided the curator of the Korean Pavilion around and he mentioned how much of a fan his mother was of Cliff Richard. Also in the painting tradition, the landscape tradition and, indeed, the planning tradition. In Holland - a country hugely associated with planning and modern architecture - we have always seen Britain as the land of where planning originates. Britain should not think of itself as so parochial because it isn’t. A lot of the references in the exhibition are extremely British but they have a mass audience out there.

AD: As you walk in you see an enormous mound of earth with a pink staircase leading up to it. Could you explain this installation?

SJ: Over the course of the research that we undertook it became apparent that the strange, perhaps unique feature of British architecture, is the mound. The mound that we’ve constructed here is a mound which is every mound: the mound of neolithic Britain, the giant earthworks of Silbury Hill, part of the landscape of Stonehenge and Avebury and so on, but it’s also the mound of Arnold Circus in the Boundary Estate (London) - one of the world’s first social housing projects where the ruins of one of the most notorious slums were piled up to create the park. This was the centre for a new idea for how you might be able to house people in London, which is also linked to the famous mound at the centre of Robin Hood Gardens, the project by Alison and Peter Smithson, which is scheduled for demolition sometime in the very near future. In fact, some of the earth in the mound we’ve constructed here, comes from Robin Hood Gardens.

The mound is representative of a certain kind of feature but it’s also a provocation; it’s also something which represents a burial mound (a kind of end) but, at the same time, the construction site - the place where things can begin. We feel that it’s an incredible symbolic gesture to place this huge mound of earth in the centre of the British Pavilion. It’s also perhaps ‘unarchitecture’: a state either before or after architecture. It has a kind of destabilising quality.

AD: You could say that Britain is heading towards a planning crisis. How do you think the research that you’ve undertaken to curate this pavilion might inform or influence this?

WV: We think it might inform it in two ways. Firstly, there seems to be a consensus that Britain is not a country of planners, nor modern architecture, nor social housing. These are apparently all foreign concepts that Britain has rejected and that they don’t really need; “Britain is a country of rugged individualists!” What we’re trying to do here is to not just say “that’s not true because here are some British plans”, but to show how the planning itself is so deeply and broadly embedded in the entire fabric of British culture. Not just in the state institutions, not just in the architectural offices, not just in the architecture magazines or the schools, but also in strange anarchic Christian communities, in Rastafarian reggae bands’ album covers, in stenographer’s and failed farmers like Ebenezer Howard (who comes up with most radical planning concept of the whole twentieth century). It goes much deeper - it’s actually part of the collective spirit of Britain to plan (meaning the collective ambition to change the world into a better place).

Secondly, we hope it will fire up that imagination again and to broaden the scope of planners and architects. Not play to the people who want to restore public housing or brutalist architecture but to say that we should fire up that broad collective imagination and open up people’s eyes and the profession much more in order to gather all that energy and creativity and reformulate ideas for what England could become.

AD: This is FAT’s last project. Is this show in a way a culmination of FAT’s approach to architecture?

SJ: It’s a fantastic way to end. It’s a beautiful place to do it at the Venice Biennale and it’s an incredibly public way to end rather than dying in a toilet in Pennsylvania Station or being led away by the bailiffs! We’re retelling a story of British modernism which is, in some senses, a justification for everything we’ve done. It explains not only why we did the things we did but also why we were right and why everyone else was wrong; why what we did was absolutely inevitable as the product of an entire culture. It’s a provocation to everyone else by saying that British architectural culture, which has had to work quite hard to restore people’s faith, has reduced itself to simply a professional act of good detailing. We’ve always felt that that’s absolutely wrong and has always caused a problem.

We were causing a fuss about things that other people might prefer to be left to sweat under the carpet. What we’ve tried to do is lift up the carpet and get all of the dust out because we think that that dirt is exactly the stuff that makes architecture important, interesting and relevant. For us to be able to write history as the final project seems entirely appropriate. If there is any legacy that FAT will leave, this exhibition is a great way to justify that legacy.

Watch our interview with Sam Jacob from the 2012 Venice Biennale here. 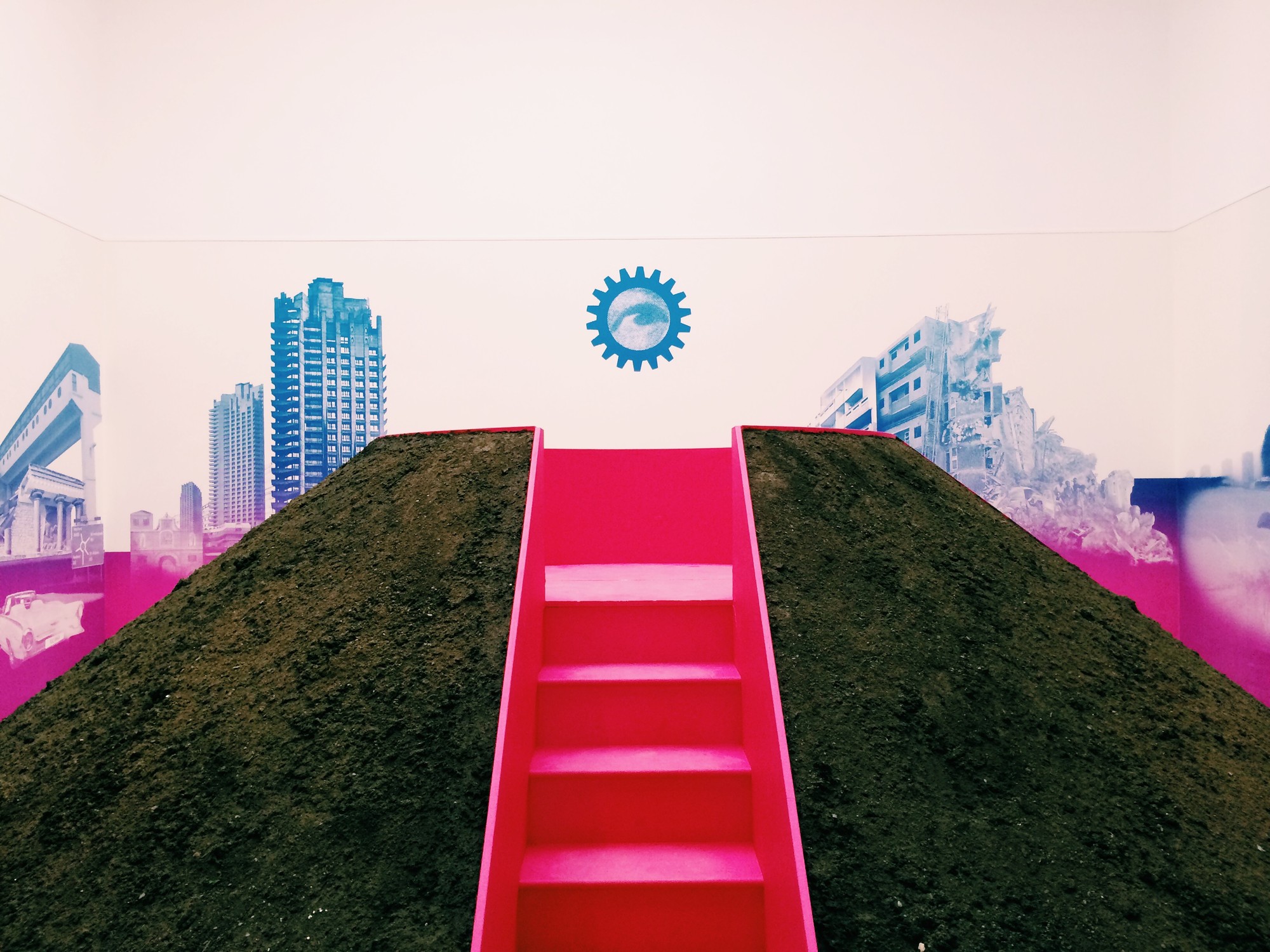 A Clockwork Jerusalem will be available to visit as part of the 2014 Venice Biennale alongside the other national pavilions between the 7th June and the 23rd November 2014. Check out ArchDaily's comprehensive coverage of the Biennale here.

This interview took place in collaboration with Mies. TV. Follow their alternative coverage of the 2014 Venice Biennale here.