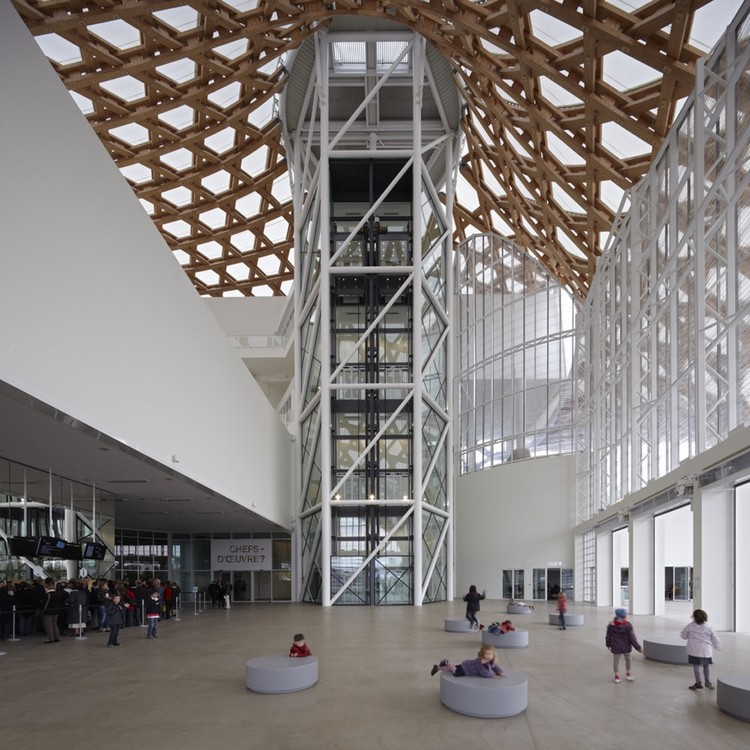 Only a month after the city of Metz in the northeast of France was chosen for the new Pompidou Center an architectural competition was launched. Of the 157 responses to the public notice, six teams were chosen to develop projects. The brief firmly nudged the competitors toward an iconic project with the hope of attracting visitors. The request was for a tall building since the elevated train tracks to the north and east block views to the site which is already in a somewhat low spot.

Comparisons between the buildings in Metz and Paris are inevitable. During program development the client identified qualities of Piano and Roger’s building that should be integrated at Metz, and flexibility of the spaces and views out, even from the galleries, were at the top of the list.

Even if the rotated gallery tubes at Metz mask the likeness, the basic organizational diagram of the two projects is surprisingly similar. In both designs a large sloped public space, a piazza, with public parking underneath, is located to the west. This exterior space flows into an interior Forum that leads to vertical circulation. Vertical circulation is used as a strong architectural gesture and connects identical, stacked, flexible, column-free exhibition spaces. Finally, exterior mechanical spaces with exposed ducts are located along the east façade of both projects. Unlike the Pompidou – Paris, Metz has a veritable back side to the east that butts against the train tracks. This side is less tidy than the other sides.

The Metz building negotiates between being tall without becoming a “high rise” in regard to code and being iconic without becoming exactly monumental. At Metz the roof structure is difficult to classify and seems to march to a different drummer. It also seems somewhat anachronistic – more in tune with the spirit of the 1970’s than that of the beginning of the 21st century. The lively forms are not of a type that willfully seeks to disturb, yet the resolution of the gallery tubes and the tent does not make immediate visual sense. The project seems to be based on very personal preoccupations. The story is often told of the woven Chinese hat that Ban found in a Paris boutique that became the inspiration for the form and more importantly, for the structure of the Metz roof. This tale has become a legendary origin for the project and the hat itself is exhibited in the building.

The continuously curved roof required the most study and development to make it feasible both structurally and economically. Shigeru Ban had worked with the German engineer Frei Otto on his paper tube Japanese Pavilion for expo 2000 in Hanover. Otto is present in the Metz project in spirit. Ban and de Gastines developed the competition project with the engineer Cecil Balmond of Ove Arup, London. After winning the competition, work continued with another team of structural engineers from Ove Arup, but design of the wood structure was finalized with the Swiss engineer Hermann Blumer.

The roof is made of double, glue-laminated wood beams that are laid horizontally and connected to form a sort of Vierendeel truss. These double beams are also double curved and run in three directions forming the hexagonal lattice. In total there are six layers of wood beams woven together, with four layers – two double beams – intersecting at any single connection point. Connections are made with pre-stressed threaded bars and disk springs.

The wood structure spans from a steel ring at the top of the hexagonal central tower to woven columns below that have been described as “tulips” or “mushrooms.” Maximum spans are approximately 40 meters (131 feet). As built, there are four tulip columns. Two columns planned for the east side of the building were eliminated for budget reasons and replaced by a steel bean running the entire length of the east facade that receives the wood structure and transfers the loads into the concrete structure below. The solution is somewhat a bricolage but understandable in order to respect a relatively tight budget.

The wood is predominately spruce and larch from Austria and Switzerland. Wood species were used in relation to their density and the particular loads the beams would be taking in specific structural pieces. The entire realization was highly dependent on computer modeling and CNC fabrication. The membrane was installed just behind the wood structure to limit the time the wood would be exposed to weather. Since the wood is covered it is expected to maintain its yellowish color rather than turning gray.

The building is covered by 8000 square meters of PTFE-coated (Poly-Tetra-Fluoro-Ethylene) fiberglass membrane that was manufactured by the Japanese firm Taiyo and installed by their German affiliate in Munich. The membrane is ½ millimeter thick. Its light transmission is 15 percent and gives a very nice light quality in the spaces below.

The result of the roof is striking but does not particularly give the impression of lightness. The space below is vast, but the use of wood humanizes it and avoids monumentality. During the day the membrane appears opaque but changes with the light and time of day. In full sun it is very luminous and can be almost blinding. In other lights it changes to silver-gray or blue and can almost fade into the sky. At night when the roof is lit from below, the membrane becomes translucent and allows the wood structure to become visible. The night view better corresponds to the architects’ vision of the project.

The Forum, the main entry space, provides access to ticket sales, the museum store, an education space, and the café at ground level and a restaurant one level above that has its own elevator.

The 1,200 square meter (12,917 square foot) Grande Nef is also located on the ground floor. Its triangular shape and varied heights are the result of its position under the splayed gallery tubes above. It is a sort of residual space and its ceiling height goes from 6 to 13 to 21 meters (20 to 42.5 to 69 feet).

The three rectangular gallery tubes are rotated by 45 degrees around a point that has no recognizable significance in the building’s planning. Gallery 1 is basically oriented east/west, and Gallery 3 is oriented north/south. Orientation is also to capture views of local monuments through the 14 by 5 meter (46 by 16 feet) windows at the ends of the tubes. Gallery 3 is privileged and has a surprising view focused on the Gothic cathedral in the city center. If the exterior of the building was meant to be spectacular, the galleries are extremely straightforward spaces that resemble extruded cargo containers. They were designed to be flexible and not rival the art, but they rely heavily on temporary exhibition partitions. They are daring in their simplicity, uniformity and singular approach.

The gallery tubes have raised floors with a 25 centimeter (9.75 inch) plenum below. Air conditioning supply is through the plenum and return is through grills in the walls between the two dropped ceilings. Electrical cables also run within the plenum lending more flexibility to the space. The 60 centimeter (23.5 inch) square floor panels are uniformly perforated with small round holes to allow an even flow of air through the floor. The holes are small enough that they are not perceived within the very large space and no additional pattern has been created by linear or circular grills such as in the Brandhorst Museum or the Kunsthaus Graz respectively. This clever technical solution that allows walls to go anywhere should not be minimized in relation to the success and flexibility of the spaces where exhibition designs have already included diagonal or skewed partitions that sit comfortably on the micro-pattern of the perforated floor.

The large wood lattice and membrane roof certainly took a bite out of the Metz building budget, and it remains surprising how experientially detached the roof is from the exhibition spaces. Within the galleries visitors are hardly aware of the roof. Spreading the budget thin, however, has resulted in a building that appears more frugal and casual even if it required very advanced building techniques to realize it. The building is an event in the city – and beyond. It is big, a little rough, a little pudgy, but not ostentatious. Like its sister institution in Paris, it gives the impression that it is accessible to all.