Save
Rijksmuseum Revisited: The Dutch National Museum One Year On
Share
Or
Copy 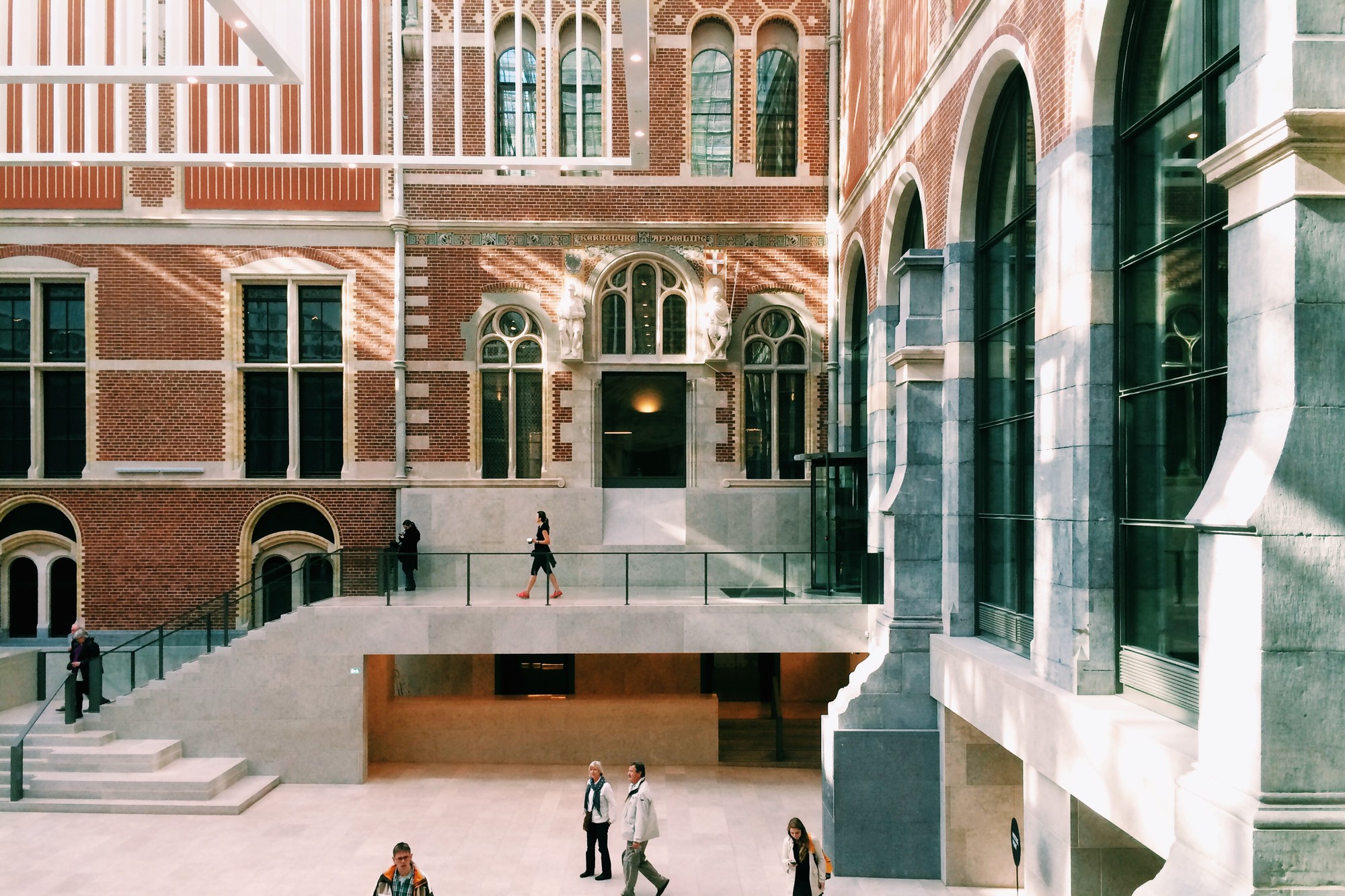 Cruz y Ortiz began by comparing this “Nordic temple” to a Venetian palazzo. On one side of the site sits the water, the Singelgrachtkering canal, and on the other, the street. The pair’s first move was to reinstate the location of Cuyper’s original, but unrealised, entrances back into the heart of the building. This restored the building's centre of gravity by opening up a new axis of symmetry.

The fragmentation of the building which occurred in the 1950s and 60s meant that orientation, circulation and visual coherence had been all but lost. Cruz y Ortiz steered a ‘less is more' approach: by stripping, cleaning and consolidating the labyrinthine spaces that had been collaged together during the 20th century, the building's original, cathedral-like volumes, reemerged.

Dibbits remembers how Cruz y Ortiz “won the competition because they were the ones who were able to look at the building completely afresh and make radical decisions.” By opening up the courtyards, for example, they delivered two new large vessels of public space in the very core of the building. Dibbits continues: “In bringing a new kind of transparency to the building, in letting the building breath again, in letting light in once more - it's worked fantastically well.”

Moreover, by opening up these large spaces and centralising the entrance they immediately reinstated a new sense of place. Dibbits notes how “the courtyard works because it’s a bustling place. You don’t need a ticket to enter - it’s a public square inside the museum.” In a similar vein, the bicycle path that cuts through the centre of the building, which garnered much controversy during design and construction in the early 2000s, not only reconnects the Rijks with the locals’ daily bicycle commute but also symbolises the deep rooted sense of movement Cruz y Ortiz have instilled back into the building.

However, the Rijksmuseum stands confidently on the international stage because of the unique, constrained dialogue between the artwork and the architecture that it fosters. Cruz y Ortiz took the design decision to reinstate a selection of the building’s original decorations - most prominently in the Great Hall and Cuyper’s library - treating them as objects in the Rijks’ collection. Moreover, the other three key teams involved in the redesign - interior architects Wilmotte & Associés, restoration architects Van Hoogevest, and the curatorial team of the Rijksmuseum, adopted a similar design approach so that the objects, like the building that they are housed in, are displayed in a simple, visually restrained way. Jean-Michel Wilmotte, known for his interior work to the Louvre in Paris, employed a palette of tonal greys throughout the galleries to anchor the artefacts and artwork to the walls whilst providing a clean, neutral background upon which to enjoy them.

From the outset, the curatorial team decided not to expand the exhibition space, in spite of the fact that the collection was continuing to grow. As Dibbits puts it: “We thought that a concise museum serves the public much more than a museum that just keeps on growing where you get a sort of Stendhal Syndrome.” Thus, the Gallery of Honour, filled with famed masterpieces such as Vermeer’s Milk Maid, was remodelled to allow people short on time to visit the museum, see a selection of the the best of the collection, and leave again without being forced around the entire museum. As with most large galleries, the Rijksmuseum is known for housing one particular artwork: Rembrandt’s de Nachtwacht, or Night Watch - recently described by Barack Obama as “the best backdrop you can have” for a press conference. The enormous picture depicting Dutch militia men sits proudly at the end of the Gallery of Honour, the “high alter” of this cathedral of art. The museum was originally built to transform the relatively unknown masterpiece into a Dutch icon; the crowds which surround it today are testament to the building’s success.

The two new built additions, including the Asian Pavilion, which sits as an objet trouvé in the Rijksmuseum’s gardens, have a very minimalist formal language that clearly contrasts but does not compete with Cuyper’s original gesamtkunstwerk. In Cruz y Ortiz’s Amsterdam office, directly opposite the Rijksmuseum’s Philips Wing (which is set to reopen later this year), Muriel Huisman, project architect for the renovation, described how they “were not deliberately looking for contrast, though the shape does evidently do so. The pavilion was located on a square site so we deliberately used angles to define it as independent from its surroundings.” They were, however, seeking the same kind of monumentality apparent both in Cuyper’s original design and in the work they were doing within the main building. “We detailed it in such a way that the stone façade appears continuous and wraps around the entire pavilion” - a signature of Cruz y Ortiz’s work.

Huisman also drew my attention to how similar their original competition sketch was to what has been realised: “Cruz y Ortiz always like to look for a synergy between old and new, and we try not to explain things with our architecture.” With the Rijks, “there’s no cut between old and new; we’ve tried to merge it. We did this by looking for materials that were true to the original building, resulting in a kind of silent architecture.”

A ten year project, however, is no mean feat. According to Huisman, collaboration became harder as the project went on because there was no continuous client. “Over the ten year period managers came and went, and each new one came in to improve upon the previous one”, which eventually meant that the architects found it difficult to speak directly to the ultimate users of the building: the Rijksmuseum themselves.

Despite the minor difficulties during its construction, however, the Rijksmuseum appears to be firmly on an upwards trajectory. Dibbits notes how, one year on, “the public appreciates the very clear, radical choices that have been made in a world where you find, especially with architecture and museum displays, compromise upon compromise.” Engaging a Spanish practice and French designer was very much criticised in the beginning, but “Dutch art is not Dutch heritage, it’s a heritage that belongs to all of us.”

Dibbits recalls how they had a lot of discussion back in 2003 about the relevance of museums in the 21st century: “Because the world is changing and because everything is digital, people want anchors - places that are authentic and about the physical object. When they are at the Rijksmuseum they don’t want to be distracted by the wider changes around them and the non-physicality of the modern world.”

I would argue that Cruz y Ortiz have set a new precedent for museum design. As a practice they respect history, but are directed towards tomorrow. The Rijksmuseum, which was considered so ‘un-Dutch’ when first unveiled has, ironically, become part of the Dutch vernacular as much as the canal houses of Amsterdam or the work of the Netherlands’ latest generation of architects and designers, from OMA to MVRDV. It is a museum of painting, applied arts and national history - a combination of exhibitions which no other national museum can yet compete with. The visitor is not confronted by, in the words of Jaap Huisman, “story lines that tumble over each other too expressively.” A trip to the new Rijksmuseum is one of humane proportions where the treasures of Dutch history are laid out with clarity. A trip to the Rijksmuseum is even better one year on.

Thanks to Muriel Huisman, project architect for Cruz y Ortiz' remodelling of the Rijksmuseum, and Taco Dibbits, Director of Collections, for taking the time to offer their opinions on the Rijksmuseum one year on.

Find out more about the Rijksmuseum on ArchDaily and see more of Cruz y Ortiz' work here. The Rijksmuseum is set to host the 2014 Pritzker Prize ceremony on June 13th.