ArchDaily recently spoke to Ben van Berkel, co-founder and principal architect at UNStudio, an international network of specialists in architecture, urban development and infrastructure based in the Netherlands. The office, which was founded in 1988, has completed projects around the world ranging from Rotterdam’s Erasmus Bridge to the Mercedes-Benz Museum in Stuttgart. With over 81 built projects, and 54 currently in progress (including Raffles City in Hangzhou and Scotts Tower in Singapore), London’s Canaletto Tower (which is due to be completed in 2015) marks the practice’s first major project in the UK.

Alongside leading UNStudio’s architectural projects, van Berkel is also Kenzo Tange Design Critic in Architecture at Harvard Graduate School of Design and Professor of Conceptual Design at the Staedelschule in Frankfurt am Main. “I love to teach and get a lot out of it. When you’re so absorbed in practice it’s so important to teach others who have a similar or better talent than you. I believe in the latest architectural strategies and the latest new ideas regarding how we understand new models of working with knowledge, and I learn these mostly from my students!” 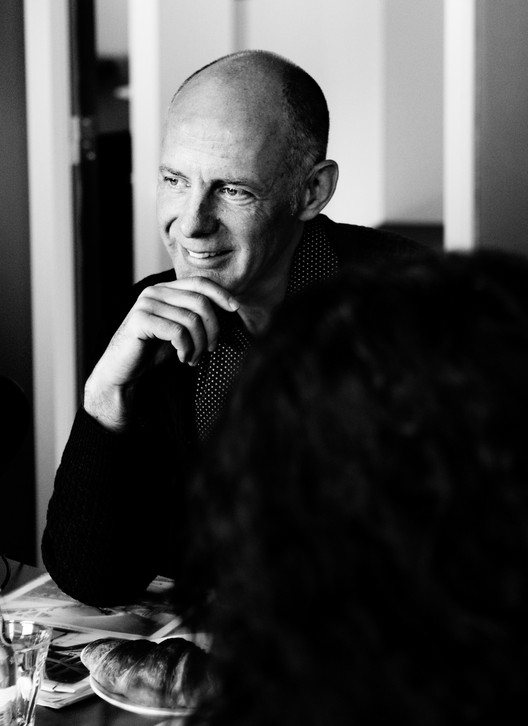 "Architecture is just background. The beauty of architecture is that it brings people together and can create public constructs. Once you know how to make this work you can also make it attractive, not only in its image but also in it’s after image. It becomes something that people can come back to and reanalyze."

Is architecture a profession or a discipline?

"It’s a discipline. For me, talking about it as a history, a series of skills, theories or philosophies is part of the progress of architecture. Of course it is a practice and a profession, but the idea of practice is something different from discipline. It deals more with how architecture is taught."

Canaletto Tower is the latest in a long list of residential buildings for UNStudio. How do you approach designing homes in large cities?

"I’m fascinated by how people are living in new kinds of ways, and how they connect themselves to the notion of the neighborhood. How can you create a communal quality in residential projects, even when residents don’t always see their neighbor? You can foster common friendships through, for example, a small cinema where you can sit with your friends in a communal space, or a café, restaurant, or gym. I think that’s how we like to live in modern life.

The idea of Streets in the Sky has been a controversial one in the history of housing in the UK. How does your interpretation differ?

"The first architects that were fascinated with this idea of the Street in the Sky were the Smithsons, and the reason why it failed was because they weren’t attractive. They were harsh in terms of material, organization, they were alienating and not inviting nor safe, which is way many of these semi public spaces are now abandoned.

"Old Street is very up and coming and full of interesting old brick and Victorian buildings. With a beautiful mix of different materials and I often noticed bends coming back into some of the facades of the buildings that surround the tower and by picking up formal elements the idea of the Neighborhood in the Sky developed. There are many young inventive economies already existing in the area and I want to play with that future of London and to me this tower reflects that."

2013 saw a number of high profile towers appear on London’s skyline (such as Vinõly's '20 Fenchurch Street' and Piano's 'The Shard'). Do you think Canaletto will set a precedent for future residential towers in central London?

"I think so. It’s very hard to say just from the renderings and models but it seems that it will look exceptional and different, and I think that's maybe to do with the tower’s feeling of robustness. The big bends that go round the side and form part of the balconies are also an extension of the interior.

"Nevertheless, I’m very careful about how we define a building as an ‘icon’ in architecture, simply because icons grow over time. I’ve seen it with the Erasmus Bridge, the Mercedes-Benz museum, also with a recent tower in Singapore, but it takes ‘cooking time’. I’m sure that this building will be a building which will be talked about - some people will like it, others not - but it doesn’t really matter. That one can refer to it, that one can point to it, that it has layers within it that spark discussion, will mean that it will not create one single iconic image. I don’t believe in ‘one-liners’, but more in buildings that create after images where it stays in the mind, where you can go back to it and see something new. I believe that the tower will operate as an ‘icon’ in a different way."

Canaletto Tower is your first major project in the UK - is it the start of many more?

"Oh yes. Don’t forget that I’m half English - I’ve lived for many years in London and studied at the AA. I still drink my Earl Grey tea!"

You can find out more about Ben van Berkel’s writings on After Image in Design Models (Thames & Hudson, London 2006), or see more of Canaletto Tower here.

You can visit UNStudio’s Motion Matters exhibition at Rome’s MAXXI gallery until April 2014.