Kahn was born Itze-Leib Schmuilowsky in Pärnu, in what is now Estonia. His family emigrated to Philadelphia when he was just a child, where Kahn would remain for the rest of his life, completing many of his later works there.

Kahn might be categorized as a late Modernist, and a hugely influential one at that. In a trip to Europe in 1928, he took more interest in Medieval architecture such as castles and walled cities than in the emerging modernist scene there. In later life this translated to a depth and solidity to his architecture which in many ways resonates with the brick edifices of Alvar Aalto and the brutalist late works of Le Corbusier, who by the 1950s had moved away from his early, machine-led influences. Kahn is perhaps best known for the Four Freedoms Park in New York, was also finally finished posthumously in 2012.

The impression he left as an individual is equally as mythical. His sometimes esoteric but always insightful understanding of architecture led to him to being often described as a "mystic" or a "guru," and a complex private life inspired his son to film the Academy Award Nominated documentary "My Architect" in 2003. In the film, his contemporary Philip Johnson said of Kahn that "he was his own artist. He was free, compared to me."

Even Kahn's death in 1974 has become a well-known piece of architectural lore. Arriving in New York after a site visit to his Indian Institute of Management, Kahn suffered a heart attack in the men's bathroom of Penn Station. Despite widespread acclaim, his studio was deeply in debt at the time, and thanks to poor communication between the New York and Philadelphia police departments, his family was not notified of his death for two days. However there was a silver lining to Kahn's unceremonious end: the briefcase he was carrying at the time was found to contain designs for a memorial to Franklin D Roosevelt on New York's Roosevelt Island. Almost four decades later, those drawings led to Kahn's last built work, Four Freedoms Park.

See all of Kahn's works on ArchDaily via the thumbnails below, and check out the links below those for even more Kahn:

Louis Kahn and Renzo Piano: The Harmony Between Each Legend's Kimbell Museum Wing 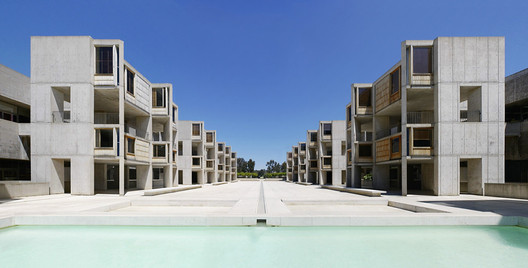