University Of Chicago: The Latest Architecture and News

9 Principles of Ethical Redevelopment to Consider in Order to Improve Communities, Not Gentrify Them

A version of this article was originally published by Common Edge as "The Principles of Ethical Redevelopment."

Where does creativity live? Can the highest level of cultural production come from down the street? What does it mean to be a good neighbor, a good steward? How does that look when there are so many forces at work keeping people isolated? How do you see value in what others discard? Can we learn to talk about moments of success in our struggling neighborhoods, not as random and magical, but as sophisticated flexibility? What is civic empathy?

These are some of the questions Place Lab, a University of Chicago partnership between Arts + Public Life and the Harris School for Public Policy, explored in an exercise last year conducted with the support of the John S. and James L. Knight Foundation: it’s the articulation of a set of nine principles collectively called Ethical Redevelopment.

Curators and Theme Announced for US Pavilion at 2018 Venice Biennale

The University of Chicago has unveiled new renderings of its planned David M. Rubenstein Forum that show major changes to the buildings’ form and relationship to the site. Designed by Diller Scofidio + Renfro, the new scheme shows a more homogeneous structure featuring a uniform zinc and glass facade that will help to better signify the distinct “neighborhoods” located within the 8-story tower.

Perkins Eastman Update SOM-Designed Laboratory at the University of Chicago

Perkins Eastman has released plans for a two-story expansion and redesign of the SOM-designed Laboratory for Astrophysics and Space Research at the University of Chicago campus in Chicago, Illinois. Construction on the 63,500 square foot building has just begun, and once completed, will serve as the renewed home of the University’s Department of Physics. The addition and renovation will create a new physics hub on campus that will allow students of different sub-disciplines to collaborate under the same roof for the first time. 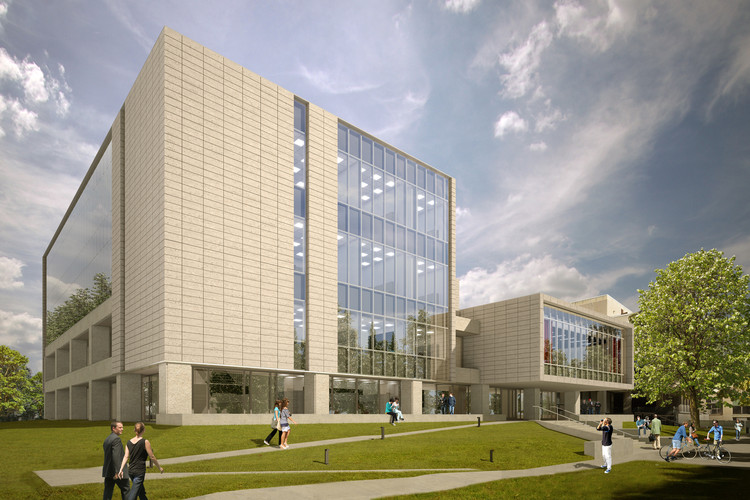 DS+R Reveals Design for the University of Chicago's Rubenstein Forum

Diller Scofidio + Renfro (DS+R) has unveiled its design for the David M. Rubenstein Forum at the southeast corner of Woodlawn Avenue and 60th Street on the University of Chicago's campus. The 90,000 square foot (8,500 square meter) facility has been devised as a place of intellectual, institutional, and educational exchange, fulfilling a variety of campus needs for meeting spaces. A collection of block-like volumes, the building’s two-story base is anchored by a narrow 165-foot (50 meter) tower, with the exterior materials and structure reflecting the programmatic divisions within.

The University of Chicago has selected Diller Scofidio + Renfro (DS+R) to design their David M. Rubenstein Forum, a new facility to host conferences, workshops, lectures, ceremonies and other gatherings. Planned for the University’s Campus South, on the southeast corner of Woodlawn Avenue and 60th Street, the Forum will provide a mix of informal and formal meeting spaces that encourage an "open exchange of ideas."

“As our first building in Chicago, the Rubenstein Forum presents a unique challenge: to imagine a contemporary place of discourse for all of the university’s constituent departments and institutes as well as invited scholars and dignitaries from around the world,” said DS+R founding partner Elizabeth Diller.

The competition to host the new Barack Obama Presidential Library has generated quite a stir, attracting proposals from cities across the United States with Chicago emerging as the current front runner. Amid the debate, that is expected to end with a decision later this month, a new controversy has surfaced on the coattails of the University of Chicago's speculative plan. The proposed concept involves a land transfer for the library to occupy one of two historic parks designed by iconic landscape architects Frederick Law Olmsted and Calvert Vaux in the 1870s. Read more about the heated debate over using public parkland to house the library, here.

The University of Chicago has chosen Bing Thom Architects to design a new home for the Chicago Booth Asia Executive MBA Program in Hong Kong. The center will begin construction in October 2014 on Mount Davis, a heritage site that was originally used as a military encampment for the British Army in the 1940s and then a detention center.

Studio Gang Architects will design a new residence hall and dining commons for the University of Chicago, officials announced today. Expected to open in 2016, the new facility will stand at the corner of 55th Street and University Ave and will act as a gateway connecting the Hyde Park community to the rest of the University. Jeanne Gang’s studio was chosen out of dozens of entries, in a process that called upon the input of faculty, staff, students, as well as community and University stakeholders.

Tod Williams and Billie Tsien Architects, a renowned practice with expertise in public/cultural buildings, just unveiled the details for the new Reva and David Logan Center for the Creative and Performing Arts at the University of Chicago.

This new building will offer 170,000sqf for studios, rehearsal space, director’s cut screening rooms, state–of–the art acoustical theaters, lecture rooms and set–building shops, that will be shared by many departments including visual arts, theater, music, as well as cinema and media studies.

The project includes a 11-story tall tower, which will become a new landmark at the south of the campus. At the top of this tower we find the Performance Penthouse, a tall space for performances and rehearsals with an amazing view over the city (see render below).

The rest of the complex is distributed on smaller buildings, with an interesting set of skylights to naturally lit the interiors.

As usual in Tod Williams Billie Tsien works, such as the American Folk Art Museum in New York, the Phoenix Art Museum and the East Asian Library at Berkeley, the simplicity of the materials (stone and glass) give the building a contemporary yet ageless look, a building that will stand over time, not just a fad.

More renderings after the break.